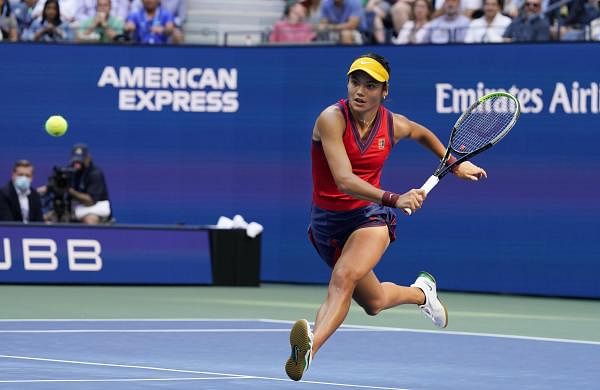 Raducanu, ranked 150th, was the first British woman in 44 years to win a Slam crown after dispatching 73rd-ranked left-hander Fernandez 6-4, 6-3.

Not since Virginia Wade in 1977 at Wimbledon had a British woman taken a Slam singles title, with Raducanu the first Briton to claim the US Open crown since Wade in 1968.

Wade and British men’s tennis legend Tim Henman were among a sellout crowd of 23,700 that created an electric atmosphere at Arthur Ashe Stadium in the first-ever women’s Slam final between unseeded players.

The showdown of prodigy talents was the first all-teen Slam final since 17-year-old Serena Williams beat 18-year-old Martina Hingis for the 1999 US Open crown.

Fernandez saved five break points in her opening service game of the match before finally surrendering the 10-minute game on a netted forehand to give Raducanu a 2-0 edge.

Fernandez broke back in the third game, Raducanu netting a backhand on the fourth break point she faced.

With each game a roller-coaster of powerful groundstrokes and sensational shotmaking, the first set hung on a knife’s edge game after game.

Raducanu forced three break points on Fernandez’s serve in the 10th game, but sent backhands long, wide and into the net.

On her fourth opportunity, Raducanu blasted a forehand winner to claim the first set after 58 minutes.

In the second set, Fernandez saved three break points and held to 1-1 then broke on a netted backhand by Raducanu to seize a 2-1 edge.

Raducanu broke back to 2-2, blasting a backhand cross-court service return winner to equalize, then later whipped a forehand passing winner by the Canadian to break for a 4-2 advantage.

Raducanu held and forced two match points on Fernandez’s serve in the eighth game but sent a backhand wide and netted a forehand with the title at stake and Fernandez held to 5-3.

Fernandez had a break chance at 30-40 in the ninth game when Raducanu skidded on the court on her left knee and opened a bleeding cut, the match halted while a trainer bandaged the wound.

Fernandez, wiping away tears, complained to the umpire about the granting of a medical timeout to no avail.

When play resumed, Fernandez sent a forehand long to squander the break chance and Raducanu ended matters after an hour and 51 minutes on her third ace of the match.

Loading...
Denial of responsibility! TechiLive.in is an automatic aggregator around the global media. All the content are available free on Internet. We have just arranged it in one platform for educational purpose only. In each content, the hyperlink to the primary source is specified. All trademarks belong to their rightful owners, all materials to their authors. If you are the owner of the content and do not want us to publish your materials on our website, please contact us by email – [email protected]. The content will be deleted within 24 hours.
18YearOldcrownEmmaEmma Raducanuleylah fernandeznews updateOpenqualifier
Share

Live updates: All Blacks vs Argentina in Rugby Championship