Notice: amp_is_available was called incorrectly. `amp_is_available()` (or `amp_is_request()`, formerly `is_amp_endpoint()`) was called too early and so it will not work properly. WordPress is currently doing the `pre_get_posts` hook. Calling this function before the `wp` action means it will not have access to `WP_Query` and the queried object to determine if it is an AMP response, thus neither the `amp_skip_post()` filter nor the AMP enabled toggle will be considered. It appears the theme with slug `publisher` is responsible; please contact the author. Please see Debugging in WordPress for more information. (This message was added in version 2.0.0.) in /home/runcloud/webapps/techilive/wp-includes/functions.php on line 5313
 2021 French Open: What to Watch on Sunday - TechiLive.in 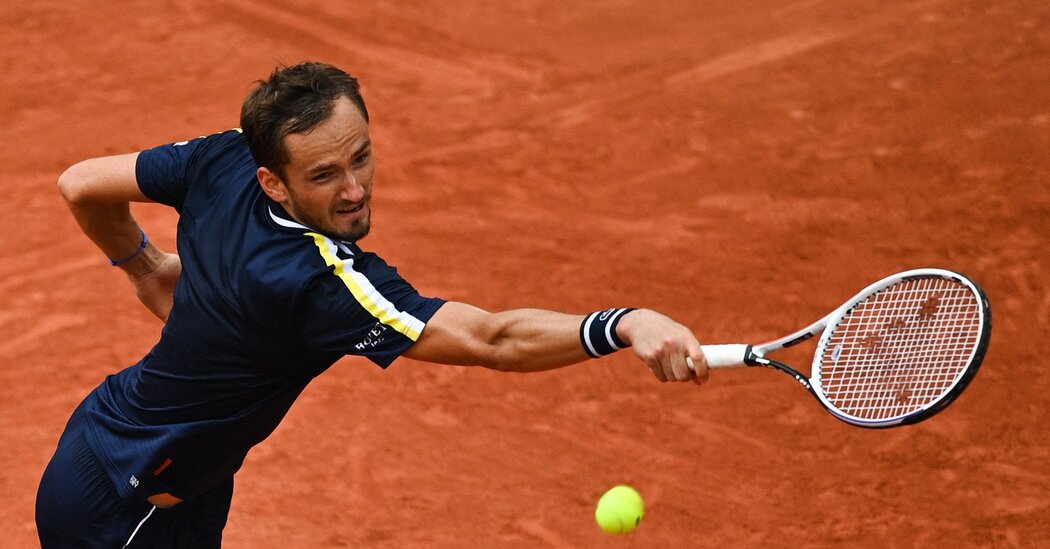 2021 French Open: What to Watch on Sunday

Both singles draws at the French Open have narrowed to just 16 competitors from 256 in the course of the past week. There are a few inspiring debutantes making their first appearance in the second week of a Grand Slam tournament, such as Tamara Zidanšek and Federico Delbonis. Although it is possible for them to push on, there are many former champions standing in their way.

Here are some matches to keep an eye on.

Before this year, Daniil Medvedev, the second seed, has never been past the first round at Roland Garros. Even this year, his clay court season had not gone well, with the 25-year-old Russian exclaiming in the middle of a match that he didn’t “want to play here on this surface.” Now, into the round of 16, Medvedev is starting to see results by leaning on his natural abilities and not becoming discouraged by the slights that the clay courts throw his way.

Cristian Garin, the 22nd seed, will provide a much sterner challenge for the Russian. Garin is a clay court specialist, winning the Junior French Open in 2013. All five of his ATP titles have come at clay court events over the past couple of years. This will be his first round of 16 appearance at a major tournament, and although he has dropped sets in each of his first three rounds, they have been quintessential “dirt rat” matches, with long grueling points that played into Garin’s overall strategy. If he can push points in that direction throughout the match against Medvedev, Garin will certainly have a chance to make his first Grand Slam quarterfinal.

Victoria Azarenka, the 15th seed, missed six Grand Slam events between 2016 and 2018 because of various personal issues, and she spent several years trying to find the same abilities that led her to two Grand Slam titles earlier in her career. After a finals appearance at the U.S. Open in 2020, it seemed that she was prepared to contend once again. But, with early exits at the 2020 French Open and 2021 Australian Open, it wasn’t clear whether or not Azarenka’s performance in Flushing Meadows was a fluke. Seemingly not; Azarenka has not dropped a set at Roland Garros on her way to the round of 16, and she is playing some of her best tennis of the year as she focuses on the second week of play.

Anastasia Pavlyuchenkova, the 31st seed, upset Aryna Sabalenka, the highest rated player left through the third round, on Friday in three sets. Pavlyuchenkova, who won two Junior Grand Slam tournament titles, has never been past the quarterfinals of a major event on the WTA Tour in a career marked by inconsistent performances. After a run to the semifinals at the Madrid Open in May, Pavlyuchenkova will feel that she is in good form, and that she is capable of finally making that big push. While her flat baseline shots are not well suited to clay, if she can power through and move Azarenka around the court, there are plenty of opportunities for an upset.

On Friday, Alejandro Davidovich Fokina upset the 15th seed, Casper Ruud, in a grueling five-set match that grew more intense with each passing minute. Even after four-and-a-half hours of play, Fokina was still constructing aggressive and precise points as he strove to reach his first Grand Slam round of 16. Now, after two five-set matches in consecutive rounds, Fokina’s endurance will be put to the test as he looks to better Federico Delbonis.

Delbonis, ranked No. 51, upset the 27th seed, Fabio Fognini, in straight sets on Friday. The 30-year-old Argentine has never been past the second round of the French Open, but all four of his career ATP finals have been on clay. Delbonis does not fit the archetypal profile of a clay court specialist; he is 6-foot-4, with a two-handed backhand that he can hit down and flatten out with ease. Delbonis will look to use his powerful shots and experience to run Fokina ragged and push through to the quarterfinals.

There were concerns throughout the clay court swing that Serena Williams was not prepared for the French Open. Williams, the seventh seed, has slowly played herself into form over the past week, delivering a sensational straight-set performance against her fellow American, Danielle Collins, on Friday. Now Williams is the only top 10 player remaining in her half of the draw, with a much clearer path to the final next week. However, the WTA Tour has a deep bench of talented youngsters looking to make champions of the past fade away.

Elena Rybakina, the 21st seed, has not dropped a set so far at this year’s French Open. The 21-year-old reached five WTA Tour finals in 2020, a tour best for the year, but she has not been able to recreate that success so far in 2021. With a career best run to the round of 16, she has made up for it, and now will need to summon her considerable power on both wings to try and unseat Williams and reach her first major quarterfinal.

Here are a few more matches to keep an eye on.

Denial of responsibility! TechiLive.in is an automatic aggregator around the global media. All the content are available free on Internet. We have just arranged it in one platform for educational purpose only. In each content, the hyperlink to the primary source is specified. All trademarks belong to their rightful owners, all materials to their authors. If you are the owner of the content and do not want us to publish your materials on our website, please contact us by email – admin@techilive.in. The content will be deleted within 24 hours.
Frenchnews updateOpensports newssports updateSundaytechi livewatch
0
Share

Must watch for environment’s sake…

Rahm forced out of PGA tournament after positive COVID-19 test