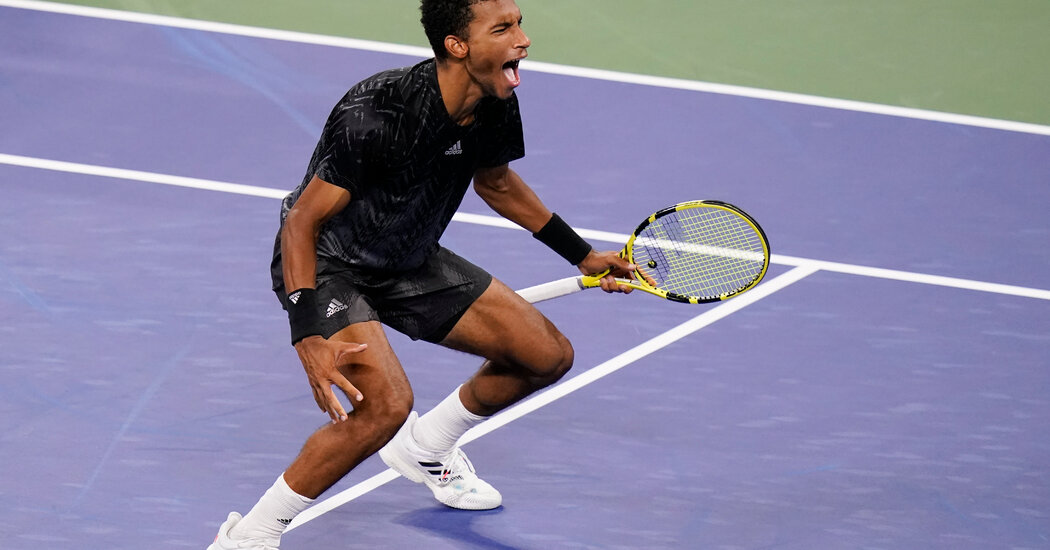 Elina Svitolina, the fifth seed, has never been past the semifinals of a Grand Slam event, while Simona Halep, the 12th seed, has won two major titles on the “natural surfaces,” grass and red clay. The two stars have met nine times on tour, and Svitolina holds a slight edge, with five victories. Although both missed out on the U.S. Open last year, they have had plenty of experience in Arthur Ashe Stadium and will be sure to provide a wonderful match to start the day.

On Friday night, both Felix Auger-Aliassime and Frances Tiafoe battled opponents for five sets under the lights of the two main stadiums at Flushing Meadows. Tiafoe upset the fifth seed, Andrey Rublev, in a tight match; Tiafoe won 150 points, while Rublev won 148, and every other stat line provided similar margins. Auger-Aliassime pushed past Roberto Bautista Agut, the 18th seed, riding behind a dominant service performance that included 27 aces. As the two heavy hitters face off, viewers can expect an explosive match under the lights.

The WTA tour has been defined by a lack of predictability. New stars appear, and consistent champions struggle through major events. In contrast, this year’s U.S. Open has been a much more favorite-friendly venue. Today’s match between Barbora Krejcikova and Garbiñe Muguruza will be the first since the 2020 Australian Open played between top 10 players at a major. Krejcikova won the French Open this year, and Muguruza has won two Grand Slam events, making this a particularly well-matched pair; neither will be hindered by the nerves that can accompany a deep run at a major tournament.

Leylah Fernandez knocked out Naomi Osaka in a three-set battle on Friday night, outlasting the defending champion. Fernandez won her first WTA title on hard courts at the Monterrey Open in March and has backed up her breakthrough year with fearless ball striking.

Angelique Kerber, a three-time major champion, reached the semifinals at Wimbledon, her first time past the fourth round of a major since her victory at Wimbledon in 2018. Kerber has faced tough opposition through the first three rounds but has looked thoroughly in control, using her counterpunching style of play to push around more aggressive opponents.

Peter Gojowczyk, ranked No. 141, upset Ugo Humbert, the 23rd seed, in the first round after a grueling set of qualifying matches to get into the main draw. Having never been past the second round of a Grand Slam event, even with 17 main draw appearances, Gojowczyk is flying in rarefied air.

Carlos Alcaraz Garfia broke into the public consciousness on Friday after a career-defining upset over the third seed, Stefanos Tsitsipas. The 18-year-old Alcaraz played a near-perfect match to reach the fourth round of a major event for the first time, using his flat baseline shots to power past Tsitsipas, a former ATP Tour Finals champion.

As this is the only main draw singles match out on the grounds today, expect New York fans to pull for either the veteran underdog or the young star based on whichever will help elongate the match.

Denial of responsibility! TechiLive.in is an automatic aggregator around the global media. All the content are available free on Internet. We have just arranged it in one platform for educational purpose only. In each content, the hyperlink to the primary source is specified. All trademarks belong to their rightful owners, all materials to their authors. If you are the owner of the content and do not want us to publish your materials on our website, please contact us by email – [email protected]. The content will be deleted within 24 hours.
news updateOpensports newssports updateSundaytechi livewatch
Share

Four Exercise Routines to Help You Stay in Shape This Fall