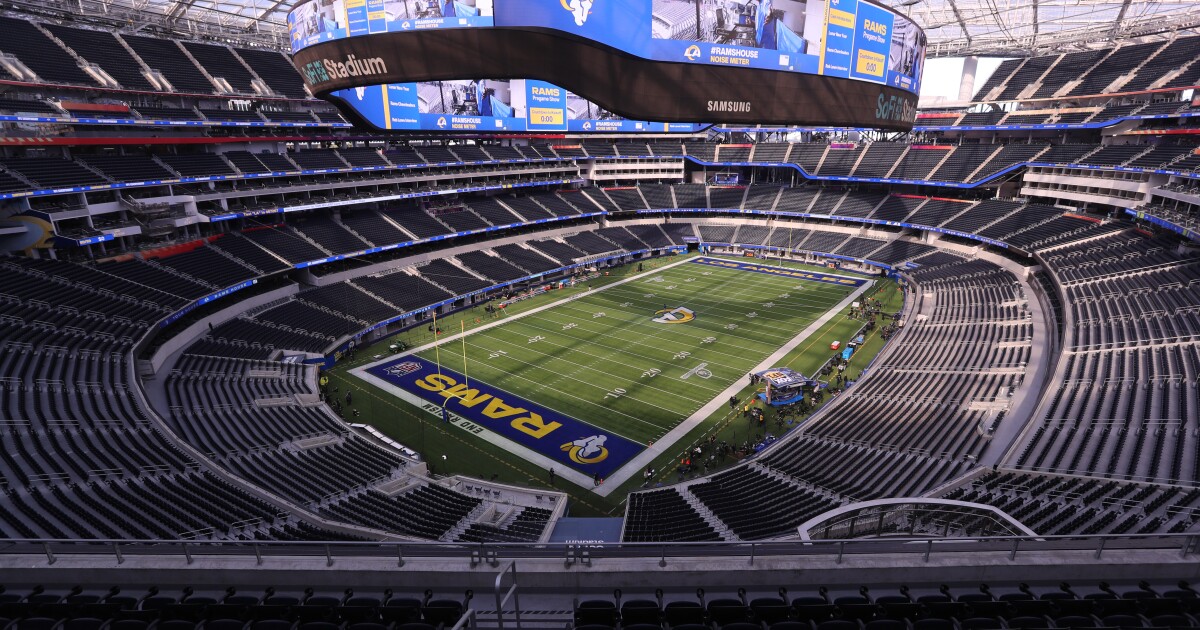 Police are investigating the apparent beating of a San Francisco 49ers fan found severely injured in the parking lot of SoFi Stadium during Sunday’s NFC championship game against the Rams.

Daniel Luna, a restaurant owner from Oakland, remains hospitalized at Harbor-UCLA Medical Center in what Inglewood police said was a medically induced coma.

Luna, 40, was discovered on the ground by Los Angeles Fire Department paramedics in the stadium’s Lot L about 4 p.m., half an hour into the Rams-49ers contest, said Inglewood Police Lt. Geoffrey Meeks. Luna was wearing a San Francisco jersey and black pants, Meeks said.

“They believe he suffered from an assault at the stadium to his upper body and facial area,” Meeks said. Detectives are working with stadium officials to determine what happened to Luna, he said.

“We are relying heavily on video to try to identify the people involved,” he said. “We are going to leave no stone unturned.”

More than 70,000 people were on hand Sunday to see the Rams best the 49ers 20-17 to advance to the Super Bowl, which SoFi Stadium will host Feb. 13. So many San Francisco fans were expected that the wives of some L.A. players campaigned on social media to give away tickets to Rams supporters.

A spokeswoman for the stadium declined to comment on Luna’s case, citing the police investigation.

Luna grew up in the Bay Area and owns a Peruvian fusion restaurant, Mistura, on Piedmont Avenue in Oakland, according to published reports about the restaurant. Its website Wednesday indicated it was temporarily closed. Luna’s wife was at the hospital with him and, she said in a brief phone call, too upset to speak.

Luna flew to L.A. and attended the game alone after other fans who were to accompany him canceled, said Vernon Hill, a friend from Oakland who is in touch with his family. He said Luna usually chronicled his outings in photos and shared them with friends and relatives, but they did not receive the usual pictures Sunday night.

He said that Luna still had his watch, wallet and phone when taken to the hospital, suggesting robbery was not a motive. Police said they could not confirm those details.

Until The Times sought to confirm Hill’s account, authorities had not released a public statement about the attack.

“I don’t want this to happen to anyone else,” Hill said. “They are having the Super Bowl there.”

The circumstances of Luna’s injuries shared some similarities with one of the darkest days in L.A. sports history, the brutal 2011 beating of San Francisco Giants fan Bryan Stow in the Dodger Stadium parking lot. Two men were convicted in the attack that left Stow, a paramedic, with brain damage.

Meeks said that thus far in the investigation, “we have not come across any information” suggesting Luna was targeted for being a 49ers fan.

Denial of responsibility! TechiLive.in is an automatic aggregator around the global media. All the content are available free on Internet. We have just arranged it in one platform for educational purpose only. In each content, the hyperlink to the primary source is specified. All trademarks belong to their rightful owners, all materials to their authors. If you are the owner of the content and do not want us to publish your materials on our website, please contact us by email – [email protected]. The content will be deleted within 24 hours.
49ersapparentbeatingChampionshipcomafannews updatenfc
Share

European stocks and US futures fall after downbeat tech earnings