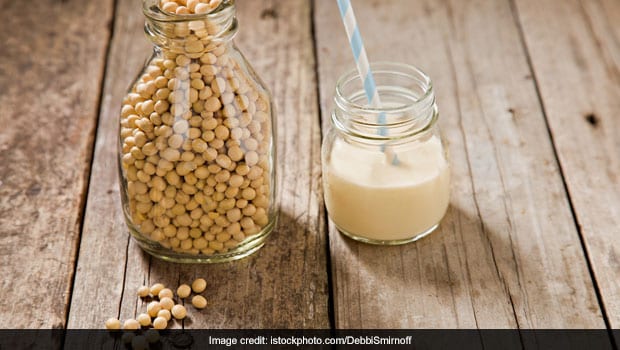 5 Ways To Include Soy Milk In Your Daily Diet

The dairy-free milk aisle appears to be getting popular these days. People have chosen to opt for oat milk, almond milk, coconut milk over the regular dairy milk that we get from our local shops. But what’s most famous is among these non-dairy milk products is soy milk. According to the Research Journal of Pharmacy and Technology, soymilk production begins with the soybean itself. On a smaller scale, it can be done quickly and easily and then flavoured to taste. Soy milk which is the original plant-based alternative, quickly became a staple product for most vegans.

And this is not only helpful for those who are diet conscious but also for those who are allergic to regular milk. The consumption of soy milk is also known to lower postmenopausal problems, obesity, and heart health.

But if you are still wondering what exactly is soya milk, then we have just the answer for you.

Soymilk is a fat-free dairy substitute derived from the legume soybean. Soya milk, made from soya beans through a soak, grind, and boil method with water, has long been a traditional beverage in Japan and China. Still, it has recently been adopted in many parts of the world and can be used to substitute for those who are vegan.

Many people opt for soya milk because of its health benefits and nutritional value. But if you are still confused about how to incorporate this into your diet, then we have a few recipes that you would like!

This one is easy, healthy, nutritious and tasty to make. All you need to do is cut half of the peeled apple into small pieces, take half a spoon of cinnamon, half a spoon of sugar and blend these all together with a cup of soy milk. The apple cinnamon soy milk might help you control your sugar, and the low-fat milk could give you good calcium while you try to avoid unnecessary fat.

Apple Cinnamon Soy Milk might help you to control your sugar

Give an exciting twist to your morning chai by making a masala soy milk chai. For this, you would require half a cup of soy milk, one cup of water, one spoon of tea leaves, one clove, one-fourth tablespoon of cardamom, two-three thin slices of ginger and one tablespoon of sugar. All you need to do is make this chai like your regular chai, and you will be ready in no time. Check out the recipe for a delicious masala chai.

This three-ingredient recipe could be a new addition to your desserts. All you need is fresh soy milk, ginger juice and a spoon of sugar. Take the soy milk and sugar in a saucepan and only boil it till it’s lukewarm. While the milk gets warm, put the ginger juice in a bowl, and then add your lukewarm milk from the top into the juice bowl so that all the ingredients combine. Leave the milk aside for 15 minutes so that it gets firm in texture. Try out these other pudding recipes.

The taste of ginger gives an extra flavour to this pudduing.

Perfect for summers, try this new kind of lassi made out of soymilk. Firstly, you would have to make curd out of soy milk. As the curd forms a firm shape, take four to five spoons of the soy curd, mix a cup of water, one cardamom and one spoon of sugar and blend it all. Then all you need to do is pour the lassi in your glass and garnish it with crushed almonds.

Again, one of the easiest recipes and suitable for summers, you can make soy milkshake out of any fruit you like. Be it mango, strawberry, banana and endless options. You would just require cutting the fruit in smaller pieces, one tablespoon of sugar and blend it with a cup of soy milk. And your soy milk smoothies will be ready!

You can make any smoothie out of soy milk.

Try out these recipes and let us know which one you liked the best!

Denial of responsibility! TechiLive.in is an automatic aggregator around the global media. All the content are available free on Internet. We have just arranged it in one platform for educational purpose only. In each content, the hyperlink to the primary source is specified. All trademarks belong to their rightful owners, all materials to their authors. If you are the owner of the content and do not want us to publish your materials on our website, please contact us by email – [email protected]. The content will be deleted within 24 hours.
curddailyDietHealthHealth newsHealth updateincludeMilk
0
Share

Txakolina for Good Cheer, Wherever You May Be