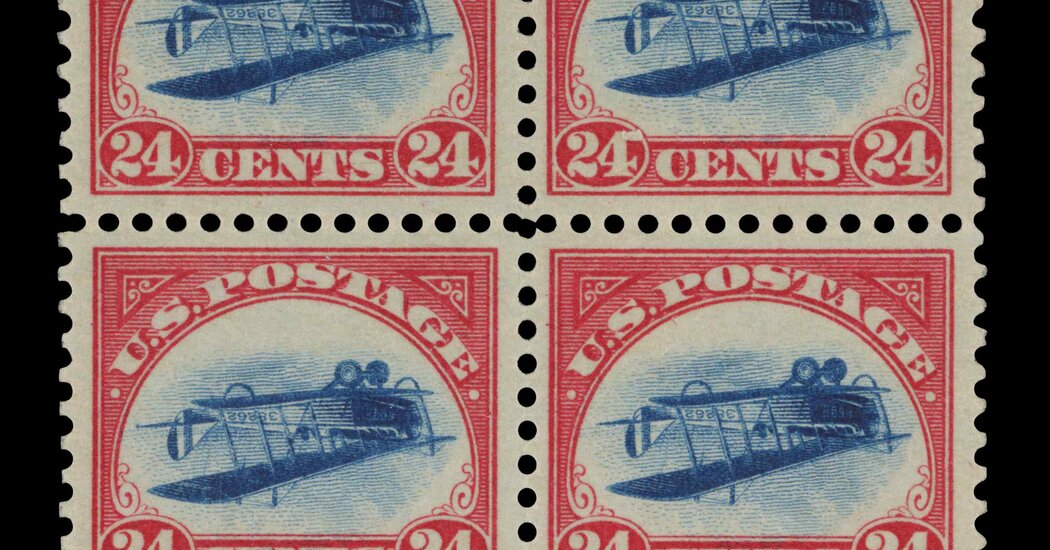 The “Inverted Jenny,” the postage stamp famously misprinted with an airplane upside down, climbed to a new height on Tuesday when a block of four sold for $4.9 million, a record for a United States stamp at auction and $2 million more than its last reported sale price.

But the quartet from one of the most famous mistakes in collecting history was the least expensive of three items sold in less than 10 minutes at Sotheby’s. A $20 U.S. gold piece that was minted in 1933 went for $18.9 million, a record for a coin. The One-Cent Magenta stamp from British Guiana (now Guyana), a 165-year-old stamp that is sometimes called the “Mona Lisa” of philately, went for $8.3 million.

Stuart Weitzman, who made a fortune in shoes, parted with the three notable collectibles, though he did not attend the sale. He said several months ago that owning the three items had fulfilled a childhood dream that began as a rookie, collecting stamps and coins. In the last 20 years, he had focused on acquiring one-of-a-kind items that he believed would have lasting value. But he said in March that he was selling the items as he planned for the end of his life.

Richard Austin, the head of books and manuscripts at Sotheby’s, said on Tuesday that Weitzman had “had fun collecting them, he wanted to have fun selling them — and he certainly has.” The money will go to charitable ventures, including a family foundation.

Sotheby’s said the “Inverted Jenny” plate block was bought by David M. Rubenstein, a co-founder of the private-equity firm the Carlyle Group. He bought a copy of Magna Carta in 2007, and sent it to the National Archives on a permanent loan. He has also bought copies of the Declaration of Independence, the Constitution and the Bill of Rights.

Sotheby’s said the buyer of the double eagle coin did not want to be identified. The buyer paid more than twice what Weitzman paid — $7.6 million in 2002. The double eagle is unique: No other double eagles can be privately owned. More than 445,000 were minted. They were supposed to be destroyed, but 20, including Weitzman’s, were stolen from the mint. Some ended up in the hands of a Philadelphia jeweler and coin dealer whose daughter discovered 10 of them in his safe deposit box in 2004. They government challenged her claim of ownership, and won. The 10 were sent to Fort Knox, leaving Weitzman’s double eagle the only one from 1933 that can legally be sold.

Like the double eagle, the One-Cent Magenta is not just rare, it is unique: There is only one One-Cent Magenta in all the world. Its selling price on Tuesday was about $1.2 million less than Weitzman paid for it in 2014. The London stamp dealer Stanley Gibbons said it was the buyer. It said it intended to “democratize access to the most elite club in collecting history and offer fractional ownership” of the tiny stamp.

The prices indicated that “there wasn’t another Stuart Weitzman in the wings waiting to buy it,” said Robert G. Rose, the chairman of the Philatelic Foundation, which authenticates stamps. “Pure philatelists apparently were not. It’s like the double eagle. I don’t know who would have purchased the double eagle. It may not have been a dyed-in-the-wool numismatist.”

Denial of responsibility! TechiLive.in is an automatic aggregator around the global media. All the content are available free on Internet. We have just arranged it in one platform for educational purpose only. In each content, the hyperlink to the primary source is specified. All trademarks belong to their rightful owners, all materials to their authors. If you are the owner of the content and do not want us to publish your materials on our website, please contact us by email – [email protected]. The content will be deleted within 24 hours.
CollectorsEducation newsEducation updatenews updaterareRecordssetsothebys
0
Share

Williamson in doubt, Santner out and Boult back for second test