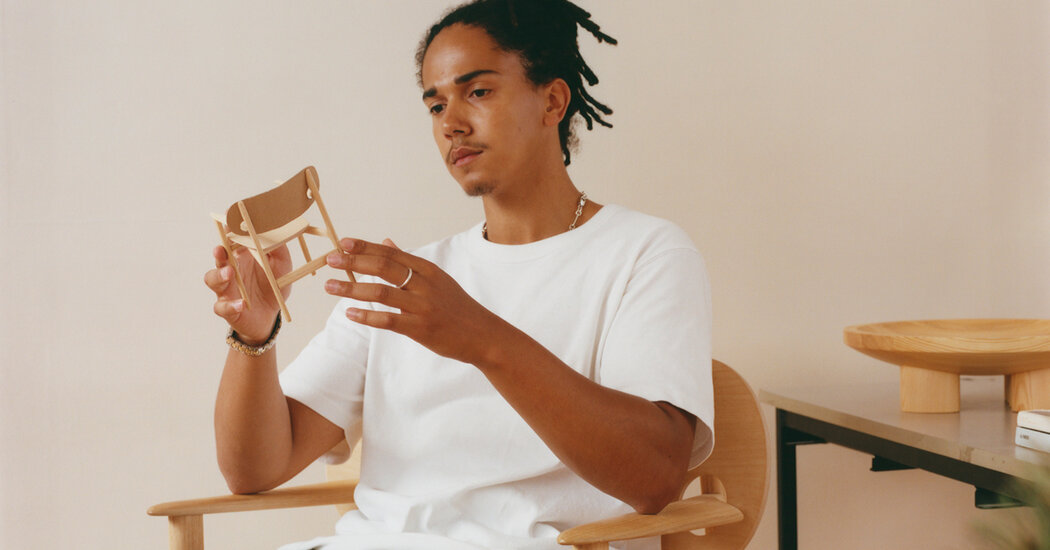 A Furniture Maker Working to Expand the Definition of British Design

“People weren’t expecting them to be so dressed up, or to be so stylish,” says Collins, a 26-year-old designer and maker currently based between Nottingham, in the English Midlands, and Newcastle, in the north of the country, of his Afro-Caribbean ancestors. Collins began tracing his heritage in earnest during his final year studying design at Newcastle’s Northumbria University, having explored the civil rights movement in his dissertation. “When you’re faced with the kind of oppression that my grandparents faced moving to England,” he continues, “I suppose [smart clothes were] another step to protecting yourself, being proud of yourself. To me, that has always been quite empowering: People expect less, but you arrive with more.”

Collins’s arrival in the design world was also rather impressive: The Iklwa, which he designed as part of his graduate collection, won the inaugural Cræftiga prize in 2018 and was subsequently put into production, in earthier tones, by the English furniture maker Benchmark. The soft-spoken, understated Collins now finds himself juggling part-time work as a guest lecturer at Northumbria University with various creative endeavors — such as designing a pair of shallow Scots pine bowls on short, stout legs for the Finnish furniture company Vaarnii that were released earlier this year — masterminded from either his Newcastle studio or the Nottingham one given to him as part of his residency with New Art Exchange, a contemporary art center in the city. A more recent focus was a project led by Wallpaper magazine and the American Hardwood Export Council, which culminated in a group show that opened at the Design Museum in London in September to which Collins contributed a cherry-wood lounge chair intended for reading and reflecting. Also last month, he received a London Design Medal for emerging designer at the London Design Festival. He is tight-lipped about his 2022 schedule but hints that he’s been thinking of how to unpack the thorny history of art in stately British homes.

Narrative is important in Collins’s work, though he is wary of his politics or ancestry coming to define it entirely. “I hadn’t really referenced my heritage or my identity before in any of my work until the Iklwa chair,” he muses. “I’m proud of my identity and I think there’s space to respond to my own position within the African diaspora, but at the same time I don’t intend for it to be all of my practice.” Japanese and Danish design, especially Finn Juhl’s 1949 Chieftain Chair, were early reference points for him. He also appreciates the exuberant output of the 20th-century Brazilian designer Sergio Rodrigues and keeps tabs on his peers: He name-checks the young Japan-born, Netherlands-based designer Sho Ota, whose raw, texture-laden work Collins discovered on Instagram.

Collins is also wary of London, the unofficial locus of the UK design scene, and, as a member of the steering committee of Design Can, an initiative launched in 2019 to fix the industry’s diversity problem, does his best to shift focus to other areas of the country. “I’d be excited to see more opportunities emerging in cities like Nottingham, Leeds, Newcastle, that are stand-alone,” he says. “Instead of feeling like you do enough where you are to then exhibit in London, it should feel like you do enough where you are in order to make that city compete on a global stage.”

Productivity is certainly not a problem for Collins, who begins his day at 5 a.m.; he has always been a short sleeper and does his best work in the early hours. His process is immersive, driven by his practice of imagining the people who might use an object, even before he can picture the object itself. Music — a mix of Freddie McGregor, Madlib, the poet Gil Scott-Heron and British up-and-comers like Wesley Joseph and Yazmin Lacey — is central to his achieving the right headspace.

Growing up in Nottingham, the lone boy among six sisters, Collins was always drawing and filling drawers with miniature collections of rocks, magnets and the rubber-coated metal balls salvaged from inside old computer mice. “Something about the texture and the surprising weight” appealed to him, as did the prospect of pulling apart old technology. He graduated to graffiti, illustration and live art performances as a teenager, and became interested in sculpture and three-dimensional forms while completing a one-year, multidisciplinary arts program after high school. At university, he developed the technical side of his skill set, realizing that making objects interested him just as much as designing them.

Today, Collins says, he thinks of himself as living “somewhere in the gray area of designer, artist and maker.” He continues: “Ideally, I’d like to be able to make the one-offs, the exhibition pieces, but any kind of batch production would be out of my hands.” As he’s built his practice, he’s occasionally turned to his mentor figures — the Switzerland-based creative Ini Archibong, the London-based designer Tomoko Azumi — for advice. The most prescient piece of counsel he’s received so far? “To slow down,” says Collins. “I think I’d been feeling like I needed to rush into doing lots of things, so moving forward I’m going to be more selective.”

Denial of responsibility! TechiLive.in is an automatic aggregator around the global media. All the content are available free on Internet. We have just arranged it in one platform for educational purpose only. In each content, the hyperlink to the primary source is specified. All trademarks belong to their rightful owners, all materials to their authors. If you are the owner of the content and do not want us to publish your materials on our website, please contact us by email – [email protected]. The content will be deleted within 24 hours.
Britishdefinitiondesignexpandfurniturelifestyle newslifestyle updateMaker
Share

Black Mutton Curry: How To Make This Authentic Maharashtrian Mutton Curry (Recipe Inside)