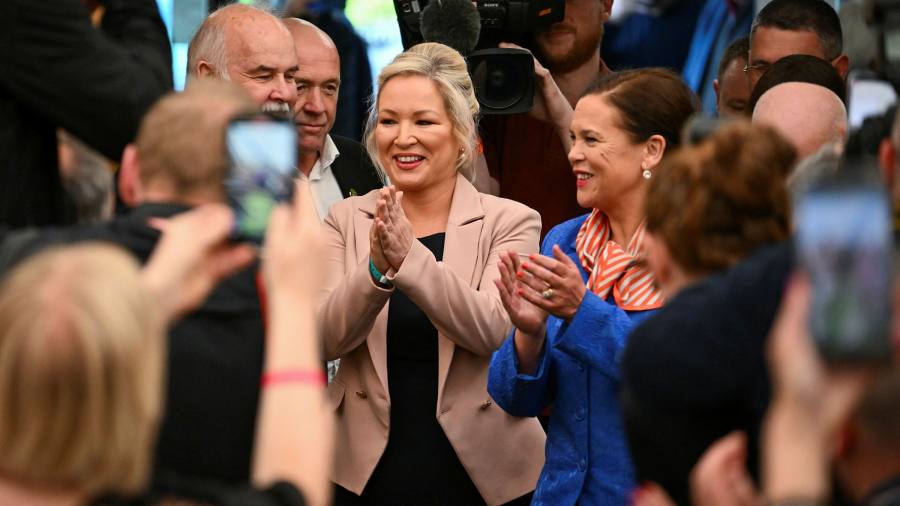 A historic election that leaves Northern Ireland where it was

Northern Ireland is a place where democracy is weakly rooted. So it is troubling that while there are clear winners from last week’s historic election and widespread backing for constructive government, it is in a rut.

The big news was the victory of Sinn Féin, the one-time political wing of the Provisional IRA. It is now the largest party, having claimed 29 per cent of first preferences. This is quite a moment for nationalists — those who want Northern Ireland to be part of Ireland.

Sinn Féin’s position as the largest party in the Northern Ireland assembly means Michelle O’Neill, their leader, has the right to take the title of first minister, an upgrade from her current role as deputy first minister.

Northern Ireland’s executive is always led by two leaders, one nationalist and one from the unionist community, which wants the region to stay in the UK. While one is styled as “deputy”, the roles are equal. So O’Neill’s promotion would only be a symbolic shift. But what symbolism. In the 1960s, when the Northern Irish civil rights movement’s work started, the six counties were marred by cruelty and bigotry, with equal rights denied to the largely Catholic nationalist minority. Having a nationalist in charge is a milestone.

Still, Sinn Féin’s win does not bring unification closer. The 1998 Good Friday Agreement, which underpins the peace, states that this can only be achieved by a referendum — or “border poll” — which will only be called when the UK government believes nationalists have a majority. They do not.

Indeed, in this election, nationalism polled roughly where it did a generation ago. Sinn Féin’s votes rose this time by consolidating that bloc — continuing a long-term trend by which it has marginalised the more moderate Social Democratic and Labour party.

Unionism, meanwhile, has splintered. The Democratic Unionist party, the biggest unionist party, is (with some justification) blamed by unionists for the existence of the Northern Ireland protocol, the part of the UK’s EU withdrawal agreement that creates a regulatory border for goods from Great Britain. Unionists voters scattered, some to Traditional Unionist Voice, a more hardline party.

Some joined the “neithers”, or people who do not identify with either tradition — the only community that has grown markedly since 1998. Alliance, an unaligned party, surged into third place. It also took votes from moderate unionists and nationalists.

It would always be painful for the DUP to accept a first minister from Sinn Féin. But the DUP has also said it will refuse to go into government until the protocol is gone. Under the rules, this will mean the province can have no government — and the clock will start on another election. It may yet return to power, perhaps having received some guarantee. But it is anti-democratic for a party — one with just 21 per cent of first preferences — to use other people’s right to government as a bargaining chip.

Giving the biggest single party in the two communities such a strong veto has proved an error. It will be even more indefensible if the neithers rise more or the vote fractures further.

The UK government should not encourage this with loose talk of ditching the protocol. It can be improved through negotiation. A big majority of voters backed politicians supporting this approach. The priority now must be getting a government. To that end, Sinn Féin should drop talk of an imminent border poll: it will not happen and it makes it more difficult to get unionists on board.

John Hume, the nationalist and civil rights leader whose ideas above all built this system, hoped it would make people “work together in shared endeavour for the good of all”. Northern Ireland needs leaders of his vision today.

Denial of responsibility! TechiLive.in is an automatic aggregator around the global media. All the content are available free on Internet. We have just arranged it in one platform for educational purpose only. In each content, the hyperlink to the primary source is specified. All trademarks belong to their rightful owners, all materials to their authors. If you are the owner of the content and do not want us to publish your materials on our website, please contact us by email – [email protected]. The content will be deleted within 24 hours.
business newsBusiness updateelectionHistoricIrelandleavesnews updateNorthern
Share

Vipin Kaushik: Theatre can help but after that, your hard work counts