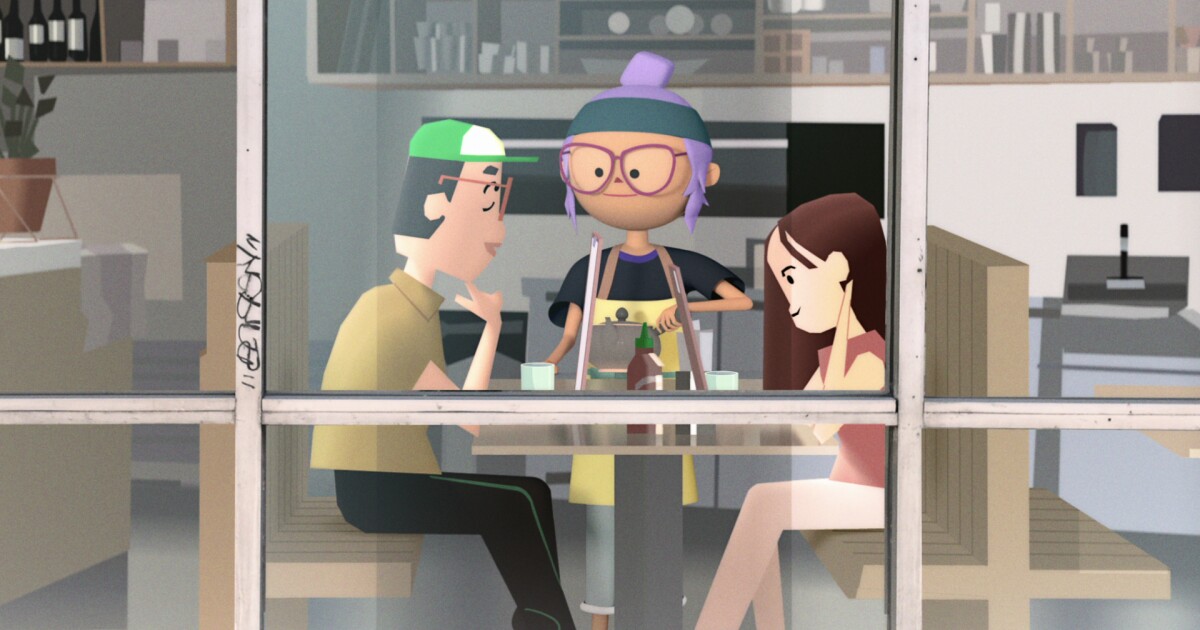 Elizabeth Ito first heard about Otomisan, one of Boyle Heights’ only Japanese restaurants, from a Guatemalan friend.

“He told me, ‘I know there’s this Japanese restaurant randomly near where I lived and … I introduced my mom to Japanese food [there], and she loved it,’” said Ito, the creator of “City of Ghosts,” a six-part animated series on Netflix.

Prior to World War II, Boyle Heights, a working-class Latino neighborhood, had a substantial Japanese population. Otomisan is a reminder of the intersection of two cultures, a theme of the first episode of the series in which food plays a large role.

“City of Ghosts” follows a group of young ghost hunter-documentarians, who, in the process of helping adults handle the spirits haunting them, learn about L.A.’s multicultural history. It’s a refreshingly slow-paced children’s show (with plenty of substance for adults) that manages to intertwine humor with poignancy while touching upon heavier topics like gentrification and the Japanese American internment during World War II. In other episodes, the “Ghost Club” learns about L.A. Basin’s indigenous Tongva tribe, Oaxacan culture in Koreatown and Leimert Park’s storied jazz history.

The series incorporates dialogue that feels natural, a byproduct of Ito having real-life people perform the voice-overs. The series launches with the introduction of Chef Jo, a character voiced by L.A. chef Isa Fabro. The chef is opening a Japanese-inspired restaurant in Boyle Heights, but she first has to confront an apparition named Janet, who has been moving a Japanese lucky cat figurine and turning on faucets. Janet is voiced by Judy Hayashi, whose mother owns Otomisan.

Ito, an Emmy Award-winning “Adventure Time” alum, interviewed her “actors” and braided their stories into her plot. Although they had a script, Ito also gave them free rein to ad-lib. Fabro’s off-the-cuff remarks about Janet tossing Chef Jo’s deep fryer out the door ended up becoming part of the episode.

“With Isa, we had been looking for somebody who could talk about being a chef with some authority, where you don’t get the sense when you’re asking them questions that they’re making it up because they’ve actually cooked,” Ito explained.

Fabro says she can identify with her character. “Chef Jo is a small business owner [who’s] worked all over L.A., and [she’s] finally able to cook [her] own food. I think that statement resonates with a lot of first-time, small business owners who are chefs,” Fabro said. “You have experience under your belt, but then finally [when you] set up your own brick and mortar, it’s terrifying and exhilarating at the same time.”

When Chef Jo discusses her otherworldly experiences with her friend Mariko (voiced by Kuniko Yagi, Japanese chef-owner of L.A.’s Pikunico restaurant), Mariko says she’s worked at several L.A. restaurants that had to close because of problematic ghosts. Yagi believes in spirits, said Ito, who developed the Mariko character after long conversations with the chef. “She believes that you [need to] … assess the space and try to figure out how to de-ghost it before you move in, because it’ll affect your business,” Ito said.

Hayashi shared biographical stories with Ito that also made it into the script. In the first episode, Janet talks about being a child and eating at a restaurant — the Fuji Café — next door to a Boyle Heights dry cleaner owned by her mother.

Hayashi’s memories of making cheese gyoza and the way her mother makes tempura are also part of the narrative. (In reality, Fuji Café closed, and Hayashi’s mother took over the 65-year-old Otomisan restaurant.)

Ito wanted to approach her Japanese culture in a way specific to L.A. and at the same time chose not to fill in some of the details. The first episode is titled “The Sort of Japanese Restaurant.” It’s not clear whether Chef Jo is Japanese; Fabro is Filipino American.

“We’re after a real example of an Asian person, like you’re not sure if they’re actually Japanese or not, but they’re trying to open this restaurant that celebrates things that are adjacent to their expertise and what they want people to experience,” Ito said.

Fabro, whose career has expanded into social-justice work, is happy to not be pigeon-holed. “I don’t want to just label myself as a character that is specifically one [type of] Asian American,” Fabro said. “Don’t just label me as a woman, Asian or pastry chef. … You have to look into everyone’s body of work to really appreciate the breadth of work.”

Ito has roots in East L.A. She recalled how her Japanese American father, who lived there, incorporated tamales into his family’s holiday traditions. Many of Ito’s ancestors are buried in Boyle Heights’ Evergreen Cemetery.

“There’s a lot of controversy about, ‘Whose neighborhood is this?’ and ‘Are we gentrifying it?’” Ito said. “In looking at it, it’s interesting, like I [wanted] to explore that neighborhood, because in my mind, there are a lot of intersections too. I don’t know who it belongs to either.”

In other episodes, “City of Ghosts” highlights Koreatown’s Soot Bull Jeep Korean barbecue restaurant and Atomic Cafe, a now-closed punk hangout in Little Tokyo. It’s among a growing number of shows that have been uncovering parts of the Asian American culinary experience in thoughtful ways.

In PBS’s “Lucky Chow,” host Danielle Chang paints a diverse portrait of the vast Asian American diaspora through food. Her interviews include a Michelin-starred Lao chef who came to the U.S. as a refugee and members of an Indonesian mosque who host an annual food fair. KCET’s “The Migrant Kitchen,” which looks at how immigrant culture plays into Californian cuisines, also taps in to the personal stories of Indian, Korean and Japanese chefs trying to create something uniquely their own.

Ito started working on “City of Ghosts” in 2019. Now that anti-Asian attacks are making headlines, she understands that the series is meaningful for a different set of reasons.

“It’s horrifying, but my hope is also that we’re all learning through all these moments together, and the part that makes me feel hopeful is that what I do recognize is the communities that this is happening to — because it’s obviously not just Asians — we’re getting smarter as a group [working] together.”

Denial of responsibility! TechiLive.in is an automatic aggregator around the global media. All the content are available free on Internet. We have just arranged it in one platform for educational purpose only. In each content, the hyperlink to the primary source is specified. All trademarks belong to their rightful owners, all materials to their authors. If you are the owner of the content and do not want us to publish your materials on our website, please contact us by email – [email protected]. The content will be deleted within 24 hours.
Loading...
BoyleFoodHeightshistoryJapaneseKidslifestyle newslifestyle update
0
Share

How tendons become stiffer and stronger