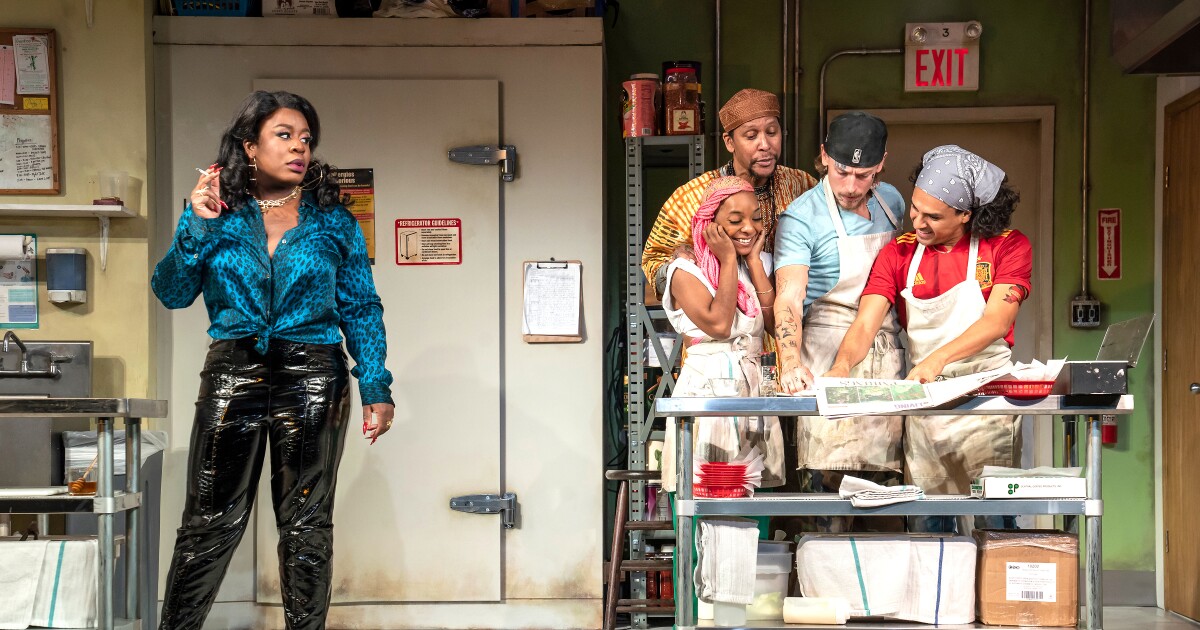 That old Yiddish proverb, “We plan, God laughs,” is coming in handy these days.

Omicron upended my holiday plans — a busman’s holiday, in which I was to return to New York for the first time in almost two years to see friends and family and catch up with the Broadway season.

I was especially aggrieved to miss the new (and apparently transformative) revival of Tony Kushner and Jeanine Tesori’s “Caroline, or Change,” which closes Jan. 9. But I consoled myself with the thought that I’d eventually be able to see the other musicals on my dance card: “Company,” “Six” and (given that the highly touted Atlantic Theater Company production is likely to transfer to Broadway) “Kimberly Akimbo.”

I had hoped also to catch Lynn Nottage’s new play, “Clyde’s,” starring Uzo Aduba, at the Hayes Theater on my last day in New York. But I was relieved that the Second Stage Theater production would be simulcast for the last two weeks of its run, which ends Jan. 16.

The first livestream performance was Tuesday, and at 4 p.m. PST, I was in position on my couch, laptop on knees and signed into the webpage, waiting for the premiere broadcast to begin.

Shows in New York usually start seven minutes late to accommodate dilatory theatergoers, so I didn’t worry at 4:05 when the webpage showed no signs of theatrical life. At 4:10, I checked in with Twitter to see if the issue was with my computer or the show itself. I was reassured that I wasn’t alone. Eventually, Second Stage tweeted that it was aware of technical difficulties and that the problem would soon be resolved.

At 4:24, I was finally able to access the production, which was already in progress. In normal times, I would have slammed my laptop shut in anger, but these are not normal times. COVID, a cruel pedagogue, has been teaching us to cut each other some slack.

We’re all stressed to the max. While I was waiting for “Clyde’s” to begin, my sister in Boston texted to say her daughter had an exposure at school and was now quarantining at home. “It’s been one thing after the other,” she wrote. I texted back, “Try to relax. No one is operating at full tilt.”

I had missed about 15 minutes of “Clyde’s,” but the play is relatively straightforward, so I had no difficulty in following the plot. Thankfully, the theater invited us to see another simulcast, so I arranged to see Wednesday’s matinee in its entirety, despite the show starting nearly a half-hour late. As I said, extra patience is required right now — for everything.

Having served time herself, Clyde hires formerly incarcerated workers under the pretense of giving them a break when, in reality, she sadistically enjoys playing warden. Whenever anyone steps out line, she’s quick to point out that felons don’t have options. Hurt by life early on, she announces that she doesn’t “do pity.” Domination is how she has survived. Squeezed by a gambling debt, she is prepared to crush anyone under her who refuses to do her bidding.

Two of the actors playing kitchen workers were out Tuesday evening and Wednesday afternoon. The role of Montrellous, the culinary artist who encourages his co-workers to think of sandwich-making as an almost spiritual endeavor, was played by Kevin Kenerly instead of Ron Cephas Jones. The part of Jason, the new hire fresh out of jail with his face and arms covered in white supremacist tattoos, was played by Stephen Michael Spencer instead of Edmund Donovan.

Nothing sums up this theater moment better than the pinch-hitting professionalism of understudies. Not having seen the original cast, I didn’t know what I was missing. I wished I could have discovered how the canny veteran Jones handled Montrellous, a character who all too often sounds like he’s delivering a Ted Talk or MasterClass. But the ensemble held together strongly.

“Clyde’s,” directed by Kate Whoriskey, represents Nottage in a more relaxed, comic mode. The two-time Pulitzer-winning author of “Ruined” and “Sweat” always has serious intent. But her new play has the satisfying, self-contained simplicity of a well-executed television comedy.

Not that “Clyde’s” is a superficial sitcom. Nottage has set up an entertaining battle between a diabolical capitalist who asks her staff to fry up putrid Chilean sea bass and an evangelist who preaches a gospel of dignified labor. Clyde’s worldview can be summed up in the Hobbesian phrase “nasty, brutish and short.” Montrellous rests his faith in rehabilitation, not as a miracle but as a restoration of purpose and meaning.

Eric Adams, the newly sworn in mayor of New York, took some heat the other day for saying that “low-skill workers” like “cooks,” “messengers” and “Dunkin’ Donuts employees” “don’t have the academic skills to sit in a corner office.” The workers at Clyde’s have internalized this attitude, but Montrellous lays down a path to self-respect through artful sandwich-making.

It ought to be noted that the two playwrights doing the most to challenge American assumptions about the value and ownership of labor are Black women: Nottage and Dominique Morisseau. “Clyde’s,” like Morisseau’s “Paradise Blue,” rejects the idea that work belongs to management. Our jobs are shown to play a crucial role in who we are and how we’re treated in the world, and therefore they come with both responsibilities and rights.

Nottage’s focus on character keeps the play from becoming dogmatic. There’s a sputtering romance between Rafael (Reza Salazar) and Letitia (Kara Young), both of whose criminal pasts are poignantly revealed between preparations of grilled cheeses and tuna melts. Salazar and Young draw out both the wit and weariness of their characters’ resilience.

The crew at Clyde’s talks tough, but these former inmates aren’t especially hardened. Even Jason, who’s covered in hateful ink, turns out to have a sympathetic backstory. The playwriting deck is kindly stacked, though Clyde’s malevolence is a formidable obstacle.

It’s a blast to watch Aduba, an Emmy winner for her work on “Orange Is the New Black” and “Mrs. America,” flamboyantly transform herself (with assistance from Jennifer Moeller’s deliciously outré costumes) into the boss from hell. When contrasted with her sedate portrayal of a therapist in Season 4 of HBO’s “In Treatment,” this display of bawdy wickedness reveals Aduba’s astonishing range.

Clyde’s demonic side is both hilariously over-the-top and deadly serious. Souls are at stake in a play that offers a modern spin on a subject that was a favorite of early morality plays: the battle between good and evil. To that end, the stage occasionally erupts in flames in a realistic work that shades fleetingly into the surreal.

The simulcast, made possible through a partnership between Second Stage and Assemble Stream, isn’t as dynamic as the National Theatre Live broadcasts. I would have liked to have had a few more glimpses of the in-person audience. To feel the electricity in the house, it’s not enough to simply hear the laughter. But virtual theatergoers are given an intimate perch to enjoy a play that is well suited for home-viewing.

The livestream version of “Clyde’s” is the next best thing to being there. And for those of us whose theater plans have been foiled by Omicron, technical difficulties seem like a small price to pay for a much-longed-for pleasure.

Denial of responsibility! TechiLive.in is an automatic aggregator around the global media. All the content are available free on Internet. We have just arranged it in one platform for educational purpose only. In each content, the hyperlink to the primary source is specified. All trademarks belong to their rightful owners, all materials to their authors. If you are the owner of the content and do not want us to publish your materials on our website, please contact us by email – [email protected]. The content will be deleted within 24 hours.
AdubaClydesentertainment newsEntertainment updatelivestreamednews updatestarringtechi live
Share

What Millennial and Gen-Z Workers Are Looking for From…

Why The Subaru SVX Was A Complete Flop