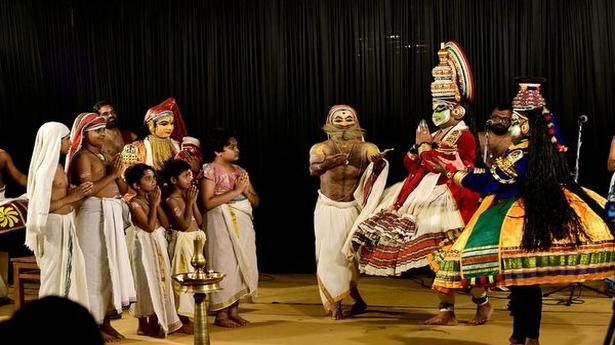 A petitioner in Krishna’s court

The Kathakali plays composed between the 17th and early 20th centuries with stories drawn from the epics deal with the myriad mortal sentiments, interspersed with divine interventions. Some are easily comprehensible, even to the uninitiated. One such play is Mandavappally Ittiraricha Menon’s Santhanagopalam, which unfolds the anguish of a Brahmin who walks into Dwaraka with the corpse of his newborn son, lamenting his fate and presenting his grievances to Krishna.

It is quite unusual to have a Brahmin, that too with semi-realistic facial make-up and simple costume, become an aadyaavasaana (principal) character in a Kathakali play, in which Arjuna usually plays a secondary role. The entry of the Brahmin is marked by five slow-tempo kitathikithimtham (a distinctly choreographed component of aangikaabhinaya for a character to establish himself on stage). For the late maestro, Kalamandalam Padmanabhan Nair, the number of the kitathikithimtham was also an indicator of the distance travelled by the character. With the Brahmin’s character — the protagonist — devoid of the spectacular aura that aharya (make-up and costume) generally gives the nayakas (heroes) and pratinayakas (anti-heroes) in Kathakali, it takes theatrical brilliance from the actor to portray the role convincingly.

A recent performance of the play at Kunnamkulam turned out to be a delectable experience. Peesappilly Rajeev, an imaginative actor with a penchant for dramatic overtones, played the grief-stricken Brahmin with his characteristic thanmayeebhava (identification), which compelled the spectators to empathise with the character’s emotional turbulence. The Brahmin’s outbursts, alongside Krishna’s detachment — excellently enacted by Adithyan, a talented young actor — carried an unusual aesthetic profundity. The versatile Kalamandalam Shanmukhan convincingly portrayed the shifting moods of Arjuna, who promises to protect the Brahmin’s next child but fails miserably to keep his word.

Right from the days of Mankulam Vishnu Namboodiri as the Brahmin and the late legend, Kalamandalam Krishnan Nair, as Arjuna, the discourse between the two characters has been protracted. The Brahmin insists on promises, sworn in the name of a host of luminaries including Krishna, for protection for his next child; a visibly exasperated Arjuna refuses all such suggestions, before eventually giving in. These prolonged dialogues are now a thing of the past; Rajeev and Shanmukhan truncated the segment, much to the relief of the audience. Rajeev effectively expressed the anger of the Brahmin, and in . the final scene, when he comes across all his 10 children, it was touching to see his frustration, anger and anguish give way to a deep sense of repentance and jubilation in front of Krishna and Arjuna.

All the slokas and the padams in the play require emotive singing. Kalamandalam Babu Namboodiri, supported by Kalamandalam Vinod, sang every padam poignantly. The Brahmin’s very first padam, ‘Haa! haa! karomi!’ is in a deshi raga, Khandaram, the notes of which serve to augment the character’s anguish. The singers did not change ragas in the key padams, a consolation for conservative viewers. Kalanilayam Udayan Namboodiri, an acclaimed Thayambaka soloist, had difficulty in accompanying the kalasams (dance segments), especially those of Arjuna. However, Kalamandalam Rajnarayanan’s apposite strokes on the maddalam more than offset the occasional shortcomings in the melam.

Raaga, an educational and arts organisation based in Florida, in association with Kunnamkulam Kathakali Club, staged the play at Bethany English School’s open-air auditorium. A video recording with English subtitles is to be screened in the U.S shortly for an international audience.

The Kerala-based writer is a music and dance critic

Denial of responsibility! TechiLive.in is an automatic aggregator around the global media. All the content are available free on Internet. We have just arranged it in one platform for educational purpose only. In each content, the hyperlink to the primary source is specified. All trademarks belong to their rightful owners, all materials to their authors. If you are the owner of the content and do not want us to publish your materials on our website, please contact us by email – admin@techilive.in. The content will be deleted within 24 hours.
Courtentertainment newsEntertainment updateKathakali; Santhanagopalam; Kathakali play; Mandavappally Ittiraricha Menon; The play held at Kunnamkulam; Kalamandalam Shanmukhan; Peesappilly RajeevKrishnasnews updatePetitionertechi live
0
Share

Alzheimer’s study: A Mediterranean diet might protect against memory loss and dementia