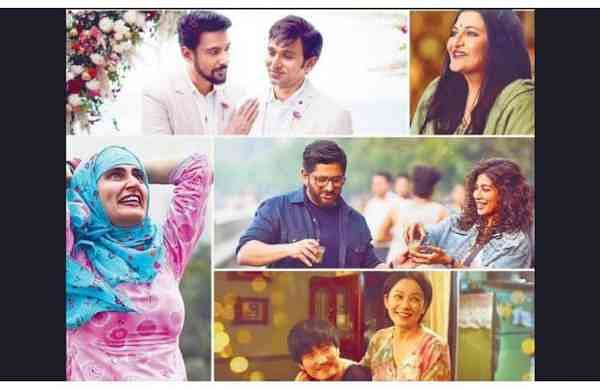 The standout episode in Modern Love Mumbai, Shonali Bose’s Raat Rani, kicks off with an ice-cream date gone wrong. Lali (Fatima Sana Shaikh) has been ordering the same mawa-flavoured ice-cream for years; her husband, Lutfi (Bhupendra Jadawat), has wearied of it. Amazon Prime Video’s series has a similar effect. By themselves, the stories in this anthology are sweet, compassionate and—in the case of Raat Rani—miraculously gluten-free. But consumed at once, they tend to hurt the teeth.

There’s a bigger problem here. None of these stories are locally sourced. Amazon—which, like Netflix, has heaped anthology upon anthology on the Indian market—could have gone bold by sourcing first-hand stories from Mumbai (by all accounts, a throbbingly romantic city). No such luck. Modern Love Mumbai is adapted from the same New York Times column that spawned the US series. The idea makes sense for fiction, not a set of personal, real-life essays. It sets a strange precedent of six distinctly Indian filmmakers reworking secondhand stories into a localised ethos.

In Hansal Mehta’s Baai, singer Manzar Ali (Pratik Gandhi) falls for chef Rajveer (Ranveer Brar), while afraid the news might fatally affect his ailing grandmother (Tanuja). My Beautiful Wrinkles, by Alankrita Shrivastava, and I Love Thane, by Dhruv Sehgal, both centre on a female protagonist adrift in the city, played by Sarika Thakur and Masaba Gupta, respectively, and forming a bond with a younger boy. Sui (Yeo Yann Yann) is aggrieved after her grown-up son (Meiyang Chang) takes up with a vegetarian girl (Wamiqa Gabbi) in Vishal Bhardwaj’s Mumbai Dragon. And in Nupur Asthana’s Cutting Chai, Latika (Chitrangada Singh) and Daniel (Arshad Warsi) rethink their marriage of many years.

Several of the films are cozy and heart-warming to a fault. Many have a habit of verbalising their characters’ existential states, an annoying habit of rom-coms. The lines are either obvious (“There is no right age for love…”) or heavy with metaphor (“There is a fourth dimension… that dimension is time”.) I Love Thane loses the naturalism it introduces between its leads. Mumbai Dragon meanders after a while. Even Baai—though well-acted and garnished with food and feeling—has that preordained sense of flipping through a family album. It’s the reason why Raat Rani, an engaging tale of independence and self-worth, is a winner, maintaining a steady beat of surprise through its runtime.

Though not originally drawn from Mumbai, the films at least capture the multicultural spirit of the city. Lali and Lutfi are runaways from Kashmir (their accents constitute a hotchpotch common to migrants). Vishal’s story is a window into the (diminishing) Indian-Chinese community in Mumbai. At one point, Sui, who begins the film by swearing to not speak in Hindi (…in Hindi!), reminisces about Deoli, in Rajasthan, where Indian-Chinese citizens were interned during the 1962 Indo-Sino war. The past springs up in Baai as well, Manzar flashing to a traumatic childhood memory during the Mumbai riots.

There are a few witty cameos, and a delightful parody of an archetypical Vishal Bhardwaj song. Yann, a Malaysian-Singaporean star making her Hindi debut, turns in a fun, animated performance (as does Fatima). And there’s something to be said about Arshad—for long, a forgotten romantic actor—turning on the charm. He rescues the series at its clumsiest, an awkward closing montage threading the different segments together. It enforces an orderliness Arshad’s easygoing performance denies. “How do you capture a city in a caption?” we’re asked in Modern Love Mumbai. The simple answer is you don’t.

Denial of responsibility! TechiLive.in is an automatic aggregator around the global media. All the content are available free on Internet. We have just arranged it in one platform for educational purpose only. In each content, the hyperlink to the primary source is specified. All trademarks belong to their rightful owners, all materials to their authors. If you are the owner of the content and do not want us to publish your materials on our website, please contact us by email – [email protected]. The content will be deleted within 24 hours.
anthologyentertainment newsEntertainment updateModern Love Mumbainews updatesoapysyrupyanthologytechi live
Share

Not to accept defeat; will continue struggle for rights of Jammu & Kashmir people: Omar on Article 370 abrogation

Back to normal? Cannes Film Festival prepares to party

Michael Caine recalls how he tracked down beauty queen wife…

Alia Bhatt off to shoot for her Hollywood film ‘Heart Of…