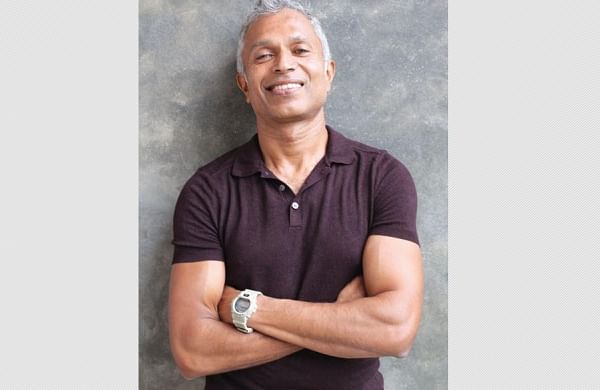 A tale of coping with loss, ‘The Unmarriageable Man’ shows that love metamorphoses into grief

Sri Lankan Ashok Ferrey is not your usual author. A keen fitness enthusiast with a degree in Maths from Oxford, he has just been nominated for the prestigious Geoffrey Bawa Award for the last building he designed—the Cricket Club Cafe.

He tells Medha Dutta Yadav that the humour in his writing is never cruel, as it comes from a deep affection, not contempt. Ferrey believes a reader can very quickly sniff out the contempt in one’s writing, and just as soon, will put the book down, since nobody likes gratuitous cruelty.

You were a builder in London just like your protagonist in The Unmarriageable Man. Also like him, you too attended to your father, during his fight with cancer. How much of your life finds its way into this book?
There are many similarities, but lots of differences too. The difficult father in the book is certainly not my father—who was in real life the gentlest and sweetest man imaginable. The protagonist has a lot of me in him, but is more brutal, more foul-mouthed than I ever was. However, the grief was absolutely real. This is why it has taken me 20 years to deal with it. It is tricky writing about real life events: there is a tendency to wallow in the self-indulgence of the misery memoir. I hope I have succeeded in avoiding this trap. The truth has to hold good as fiction, not the other way around.

How did someone with a degree in Maths from Oxford and a passion for architecture and fitness end up becoming an author?
I think I have approached each of these careers as an ingénue, assuming nothing and learning from scratch each time. This leaves you free of the excess baggage of education, which can sometimes be very burdensome. It also leaves you shivering on stage at Lit Fests when other authors start talking knowledgeably and familiarly about Dostoyevsky and Tolstoy.

You began writing in your early 40s. Do you think you should have started earlier?
These things come out of you when they are good and ready. It’s an almost biological process. It is very dangerous when the mind leaps on ahead, deciding to act before the body is ready. Had I begun writing in my 20s, I might have had a command of the language, but perhaps not the intuition, nor a certain understanding of human nature. Quite often the significance of events and actions becomes apparent only with time. You have to have a good memory to be able to replay them years later. The truth gently settles on you like dust, long after the explosion.

There is a wry humour in your writings. Is that the sort of person you are?
Sadly, yes. I am often accused of trivialising events: the more tragic the event the more humorous it seems my portrayal. This is most apparent in Serendipity, written in the last months of our brutal war, when I was mentally in a very bad place. I couldn’t believe it when all this humour started pouring out of the pen. I figured later it must have materialised like a genie from a bottle as a sort of disguise, to throw readers off the scent. It seems to me the whole job of the writer is to wrong-foot his reader at every step. A clear straight path is too flat, too obvious. It’s like explaining a joke. The humour is lost forever.

How promising is the Sri Lankan literary scene?
It’s getting there slowly. There is an unfortunate tendency for us Sri Lankan writers to be very happy with our local audiences and not bother to venture out. I suppose you could call it the ‘paradise-island-syndrome’.

Is there another career you would like to pursue?
Years ago (during my father’s cancer, actually) I was surprised to find I had something of an aptitude for long-distance running. When I was a boy my parents had actually signed up and paid to send me to boarding school in Eldoret, in the Kenyan highlands, where runners go to train. So who knows, you might have had Ashok Ferrey the runner, not Ashok Ferrey, the writer.

The weirdest compliment you have been paid?
Once a very glamorous woman sidled up to me and said: “Your biceps are better than your writing.”

One book you love to re-read.
Graham Greene’s Travels With My Aunt.

Your favourite reading companion?
My dog Fritz who sits there quietly absorbing the wisdom. My job is to make the wisecracks.

Was the pandemic creatively kind?
Well, I attempted to grow vegetables. But the only thing that grew was okra.

Denial of responsibility! TechiLive.in is an automatic aggregator around the global media. All the content are available free on Internet. We have just arranged it in one platform for educational purpose only. In each content, the hyperlink to the primary source is specified. All trademarks belong to their rightful owners, all materials to their authors. If you are the owner of the content and do not want us to publish your materials on our website, please contact us by email – [email protected]. The content will be deleted within 24 hours.
Loading...
Ashok FerreyCopingGeoffrey Bawa Awardgrieflifestyle newslifestyle updateLossManshows
0
Share