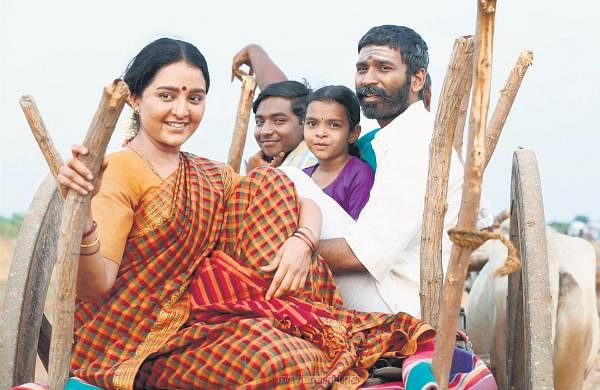 A victory for representation

The filmmaker-actor duo of Vetri Maaran and Dhanush are men on a mission when it comes to National Awards. Their collaborations have resulted in six awards, including two wins for their 2019 film, Asuran, as announced yesterday. Asuran, bankrolled by Kalaipuli S Thanu, bagged the Best Tamil Film award, and won Dhanush his second Best Actor win after Aadukalam (2011).

Despite such a rich haul, Vetri Maaran remains clear that the prospect of winning an award isn’t what drives him or his films. It all begins with one simple thing… an idea, says Vetri. “If the idea throws me into a socially responsible space, I will want to work on it. Considering how I take a long time to make a film, I only take up ideas that allow me to grow as a person, both personally and on a social level,” says the director, who then specifies that the audience is his next consideration while developing the said idea.

“All my films have been made for the Tamil mainstream audience. As there is no parallel movement in Tamil cinema, all my films have to work within the mainstream framework. Of course, there are constraints that come with it, but there have been just very few instances where I was forced to do things that I didn’t want to do.”

Tamil cinema has traditionally grappled with a stigma around ‘award films’ that are thought to be high-brow concepts with minimal budgets. However, with filmmakers like Vetri coming into the picture, there has been a marked change in the reception of such films. “One of my major priorities is to help the investors gain returns on their investment.

They shouldn’t lose money backing my idea.” While he does agree that awards are like “a nice dessert after a heavy and fulfilling meal”, he doesn’t think it to be the only yardstick for his cinema. “If my films fail as mainstream content, and make headlines only in award circuits, then, I am letting down my audience and investors.”

It is this mainstream response that piled on the appeal of Asuran. In fact, in multiple interviews, Vetri emphasised that the box-office success of Asuran was most important. Does this embolden his choices and the ideas he develops for future films? “I think with every film of mine, I have pushed myself a little further in terms of voicing my political views and standing up for what I feel is right,” adds the filmmaker, who is keen to steer away from taking any credit for the Best Actor wins of Dhanush for Aadukalam and Asuran.

“When someone is credited for their work, it is important to acknowledge the work they have put in. In the case of an actor, it is that person’s will and ability to deliver what the director wants. It is their hard work. Of course, the film might have created the right ambience for it, but that is not everything.”

So, what does the success of Asuran in both the box-office and awards circuit mean for more such films? “Mainstream success of a film is very, very important. The kind of numbers they associate with Asuran is so big that the issues spoken in the film, and filmmakers seeking for more Dalit representation will hopefully be confidently backed by investors,” signs off the filmmaker, who is currently working on a film featuring Soori and Vijay Sethupathi, following which he will move on to Suriya’s Vaadivaasal.

Loading...
Denial of responsibility! TechiLive.in is an automatic aggregator around the global media. All the content are available free on Internet. We have just arranged it in one platform for educational purpose only. In each content, the hyperlink to the primary source is specified. All trademarks belong to their rightful owners, all materials to their authors. If you are the owner of the content and do not want us to publish your materials on our website, please contact us by email – [email protected]. The content will be deleted within 24 hours.
Asuranentertainment newsEntertainment updateNational Awardsnews updateRepresentationtechi liveVetrimaaran
0
Share

From Loki to The Family Man, What to Stream in June

Skateboarding’s Cardinal Rule: Dare to Be You