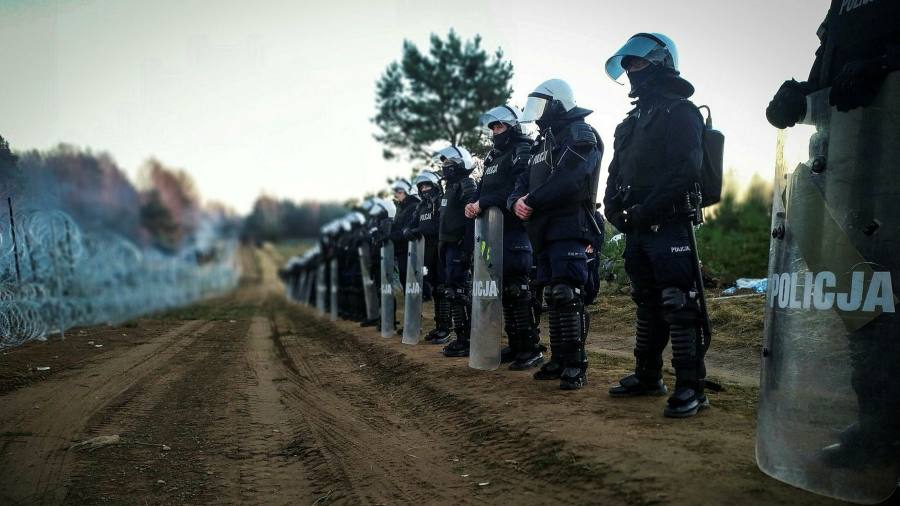 ‘A visa and plane ticket for $4,000’: Migrants caught in EU-Belarus row

Dino, an Iraqi Kurd, knew he was taking a risk trying to slip into the EU via Belarus. But desperate for a new life, he paid $4,000 to a travel agent who arranged a visa and plane ticket to the capital Minsk.

He finally reached the Polish border last weekend, to be met with barbed wire fences, sub-zero temperatures and heavily armed soldiers dispatched to prevent people like him from crossing.

He and the thousands of other migrants shunted towards the border are pawns in an escalating crisis that EU officials say has been orchestrated by the regime of Belarus’ strongman president Alexander Lukashenko, as part of a plan to destabilise the EU in retaliation for its support for Belarus’s opposition.

The stand-off escalated dramatically this week as the biggest ever group of migrants moved to the border, sparking a warning from the EU of fresh sanctions on Belarus and a threat from Lukashenko to shut off gas transits to the bloc.

At the centre of the crisis are the migrants themselves, squeezed into a thin strip of land, Polish security services on one side and Belarusian forces on the other. In video calls from the forest camps this week, they spoke of the lack of food and water and pointed out the many children at the camp, huddled around campfires on the freezing ground.

“We can’t sleep, because it’s so cold,” one woman said by phone this week. “We’re going to die here.”

There have been six fatalities, according to the Polish border guard, who only have information about cases on their side of the frontier.

During the past six months, the number of people attempting to enter the EU illegally via its eastern border has surged as Belarus allowed migrants from countries including Iraq, Syria, Somalia and Yemen to enter its territory and travel to its frontier with Poland, as well as those with Latvia and Lithuania.

Those who spoke to the FT this week told similar stories of how they came to be in Belarus. A 26-year-old factory worker, also from Kurdistan, who arrived in Minsk a week ago, said Iraqis could not secure visas at home and local agents would source them at Belarusian consulates in other countries.

A Kurdish agent offering online to organise visas for migrants said he secured Belarus visas for Iraqis in Turkey. The factory worker said he flew via Istanbul.

Despite the difficulties, the route remains popular. “Facebook, social media — they were all talking about it,” the young man said. “In every family, one [person] is trying to get to Belarus.”

After arriving in Minsk he travelled to the border in taxis with a group of about 25 others, led by a people-smuggler. But in the forest the group was ambushed and robbed, so he returned to the capital to prepare for another attempt.

With just days left on his visa, he feels let down by the company he paid $3,500 to organise his trip. “They say ‘we can get you to the border and get over easily’. But when we get to Minsk it’s not like that.”

He feels duped by the Belarusian side, too. “The government uses us in the border regions as a weapon. Lukashenko uses us against the EU,” he said, speaking by phone from Minsk.

Dino said the smugglers offered to guide people across the border for as much as $6,000. Then, he added, the migrants were given instructions to walk through the Polish forest to a specific point where they would be met by smugglers in a car.

Migrants in Belarus contacted by the FT said that while some Belarusian taxi drivers had taken people from Minsk to the border region, local authorities had not provided them with any formal assistance or organisation for that trip.

But at one makeshift border camp, located close to the Belarusian town of Grodno, migrants described Belarusian police trying to direct people, including moving them to other places along the border. Police have also tried to escalate the situation and foster violence, one migrant said.

“The Belarusian police fight us and say, ‘go to Poland’,” said Binar, a 25-year-old Iraqi, speaking by phone from a tent on the border. “You’re like a football . . . between the Belarus police, Poland and Lithuania.”

Binar left his home in northern Iraq over a month ago, travelling first to Baghdad and then to Damascus in Syria, where the company that organised his travel secured him a Belarus visa and put him on a flight.

So far, he has tried six times to cross into Poland, on one occasion walking 16 hours through the forest at night with two dozen other migrants led by a smuggler. Each time he has failed or been turned back.

Anna Dabrowska from Grupa Granica, a collective that help migrants, said the situation in the camps was desperate. “These are people experiencing an absolute human catastrophe. There’s no access to food, running water or medicines,” she said.

“We have testimonies from refugees [in Belarus] of them being beaten, of being chased with dogs. On the other side of the border is the Polish army and the police, which also don’t spare violence.”

But Binar said he had no plans to give up on his quest to reach Europe. “Even if 100 people die here, our people won’t go back,” he said. “Because we don’t want the old life, we want a better life.”

Denial of responsibility! TechiLive.in is an automatic aggregator around the global media. All the content are available free on Internet. We have just arranged it in one platform for educational purpose only. In each content, the hyperlink to the primary source is specified. All trademarks belong to their rightful owners, all materials to their authors. If you are the owner of the content and do not want us to publish your materials on our website, please contact us by email – [email protected]. The content will be deleted within 24 hours.
CaughtEducation newsEducation updateEUBelarusmigrantsnews updateplanerow
Share

This romantic drama comes with its share of ups and downs