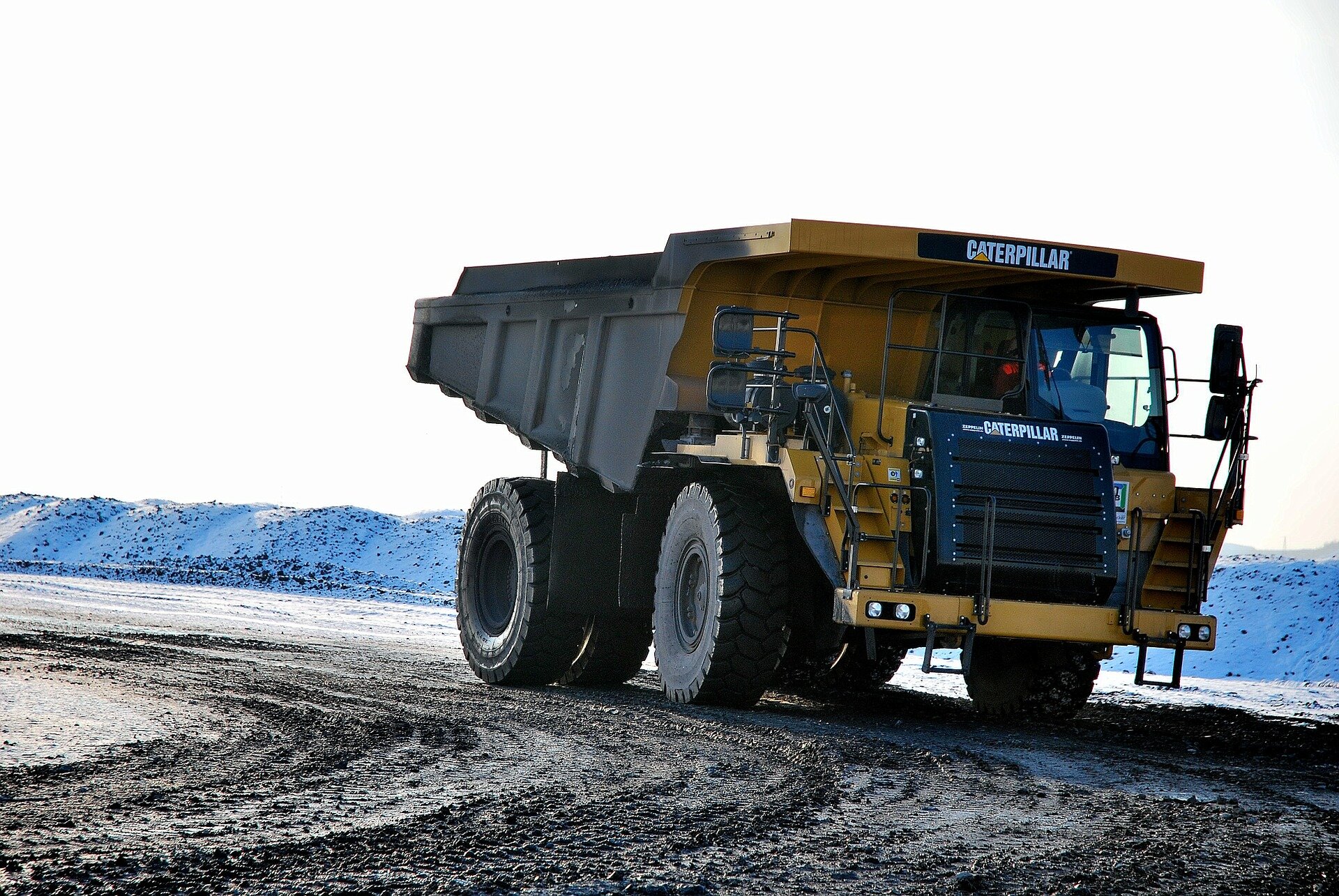 A Seattle engineering company is building one of the world’s first zero-emission engines for a massive mining truck in a warehouse packed with “Star Wars” memorabilia and machines named after “Saturday Night Live” characters.

The company, called First Mode, is led by a former NASA rocket scientist. It will soon ship the 45,000-pound engine to a South African platinum mine, where it will install the engine into a bungalow home-sized dump truck.

“Success for us and for our customer is to show everybody that you can throw this into an active operation … and make it work,” said First Mode CEO Chris Voorhees.

Voorhees and his team build and test various machines for clients, including space equipment and clean-energy technology for mines. Recently, the company even forayed into building a zero carbon emission racing vehicle to compete in the Baja 1000, a grueling Mexican off-road race approximately 850 miles long.

By replacing mining’s most carbon-expensive machine with clean energy, the two companies aim to “get their entire industry moving in that direction,” said Voorhees.

They also hope to open doors for other industrial processes to use hydrogen battery technology for energy requirements of this scale. If it’s successful, experts see this project applying pressure to other companies in the mining supply chain to make their own operations more sustainable.

‘A steaming pile of problem’

Diesel fuel is one of mining’s oldest vices. Its cost-effectiveness and high energy per gallon make it the easiest way to power industrial operations.

The problem, unsurprisingly, is carbon dioxide. Mining is responsible for producing up to 7% of global greenhouse-gas emissions, 75% of which are carbon dioxide.

First Mode says their engine does none of that.

The company’s prototype uses compressed hydrogen gas instead of diesel. The engine separates electrons from hydrogen atoms and the electron flow creates a current that charges batteries, storing energy. The hydrogen atoms—which become lone protons without their electrons—combine with oxygen to produce water, which is discharged as waste.

The engine is undergoing simulations in Seattle but won’t be tested with an actual truck until it reaches Mogalakwena, the South African mine.

Hydrogen fuel cells have been around for decades. They have been tested with cars, trucks and planes. Reports suggest the market for hydrogen equipment could reach $200 billion annually by 2050.

But sparse charging stations and high costs have prevented hydrogen technology from scaling. And First Mode’s challenge—powering mining vehicles—is “orders of magnitude” bigger than what’s been done before, said Voorhees. While powering passenger vehicles is a kilowatts problem, mines need megawatts (or thousands of kilowatts).

Of all the machinery on a mine, haul trucks are the most energy expensive. Large trucks account for more than 70% of diesel consumption at Anglo American’s mine sites, said Julian Soles, the company’s head of technology and sustainability.

Voorhees noted that these trucks run 24 hours a day in dusty, hot, off-road conditions. “It’s a steaming pile of problem is what it is.”

“I’m impressed that [Anglo American is] taking the bull by the horns,” said Neal Sullivan, an associate professor at the Colorado School of Mines.

Australia-based Fortescue Metals Group announced in July that it had finished building its own zero-emission engine and has started testing with haul trucks. While few mining companies have started explicitly building hydrogen battery engines, many have set ambitious sustainability targets. Anglo American aims to be carbon neutral by 2040. Glencore and BHP, two other major mining companies, say they’ll get there by 2050.

Metal mining operations released nearly 1.5 billion pounds of toxins into the air in 2019, making it the highest toxin-releasing industry, according to the United States Environmental Protection Agency. While that was down from previous years, it’s still nearly three times higher than the next highest sector, chemicals operations.

In addition to pollution and carbon emissions, mining has many adverse environmental impacts, including water contamination, wildlife habitat destruction and the exposure of radioactive elements while crushing rocks.

Success with this project would “make a serious dent” in mining emissions, working toward their targets, Sullivan said.

First Mode’s founders didn’t initially set out to find rocks underground. It was quite the opposite: They started by seeking rocks in outer space.

Voorhees spent 17 years with NASA working on Mars exploration. He later led Planetary Resources, a Redmond asteroid-mining company. When it folded, Voorhees and 10 colleagues pointed their tools at natural resources.

Just like in space, mining companies don’t have control over their environments, especially with rising socio-political, economic and climate concerns, said Voorhees. But building machines under resource constraints was something the team knew well.

In 2018, First Mode was born (the company points out on its website it was March 14, or “Pi Day”). The company has never sought outside investors. In the last year, the team has doubled its headcount to nearly 140, outgrowing its Sodo facility so fast it has makeshift offices in parking-lot trailers outside.

Like any other build, there’s been pressure. “It’s hard enough to build a functional prototype that’s going to go out in the field,” said Voorhees. “We’ve been building the organization at the same time.” There was no deadline, but the expectation was “as soon as possible.”

The time pressure meant First Mode could use only parts that were already on the market, and couldn’t build any major components from scratch. Local shops helped, with Boeing suppliers nearby. But the company ordered fuel cells from Canada, batteries from the U.K., electronics from Switzerland, and hydrogen from Germany.

“We work on pretty ridiculous things,” said Voorhees. The company’s space roots are still very much alive, having just shipped hardware to California to be tested and installed on NASA’s Psyche Spacecraft to help it communicate with Earth using lasers. “We take it seriously, we just don’t take ourselves too seriously.”

Applying ‘pressure’ to the supply chain

Hydrogen fuel cells have a well-known limitation: Producing hydrogen itself requires a lot of energy, much of which creates greenhouse gasses in the process.

Anglo American is addressing this by building its own hydrogen production plant on-site at Mogalakwena using renewable energy sources. Mining trade publications have reported they will largely rely on solar power.

The decision to test this technology at Mogalakwena is also noteworthy. It is among the largest platinum mines in the world, and platinum is a key material needed to manufacture fuel cells.

The project represents a broader shift in mining. Instead of decarbonizing individual machines, companies are now asking how they can eliminate emissions at every step in their supply chain.

If successful, Anglo American will be putting pressure on haul-truck manufacturers like Komatsu and Caterpillar to accelerate development of zero-emission vehicles, said Cornelius Pieper, who leads Boston Consulting Group’s Center for Climate & Sustainability.

Pieper added that truck makers first need assurance from mining companies that the demand exists for such vehicles before they invest in supplying the technology at scale. “This is the pressure that … is becoming a lot more tangible for companies all along the value chain.”

According to Nikkei Asia, Komatsu will begin developing its own hydrogen trucks this year, aiming to have them ready by 2030.

Still, mining companies are hesitant to innovate, said Charlotte Gibson, an assistant mining professor at Queen’s University near Toronto. New technology like this must be tested at mines that already operate around the clock, which could disrupt already tight productions tied to commodity prices.

“Everybody’s in a race to be the second to adopt a piece of technology,” she said.

Voorhees said Tonka won’t leave Seattle until he’s confident it’s ready to go. “One chapter of the process is done when it either gets on a plane or a boat,” he said. “We got the next chapter of bringing the system together with the vehicle. And then we’ve got another chapter after that, which is getting it working with the fleet on site.”

“That’s the plan for the next few years,” he said, “one mine site at a time.”

Loading...
Denial of responsibility! TechiLive.in is an automatic aggregator around the global media. All the content are available free on Internet. We have just arranged it in one platform for educational purpose only. In each content, the hyperlink to the primary source is specified. All trademarks belong to their rightful owners, all materials to their authors. If you are the owner of the content and do not want us to publish your materials on our website, please contact us by email – [email protected]. The content will be deleted within 24 hours.
dumpenginegadget updatehugeindustrialtech newstech updatetechi live
0
Share