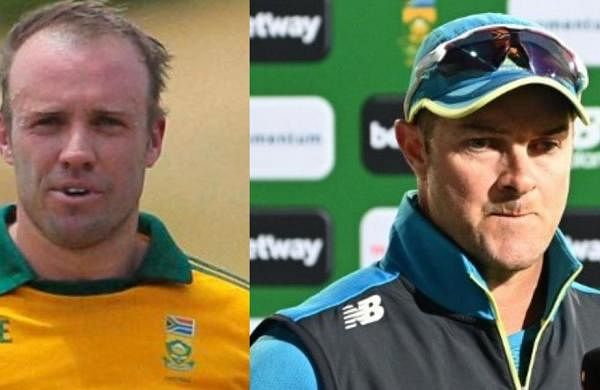 AB de Villiers still potent force in T20s but has his reasons of no comeback: Mark Boucher

JOHANNESBURG: South Africa head coach Mark Boucher believes AB de Villiers’ has his reasons to decide against coming out of international retirement and represent the national team in the upcoming ICC World T20 despite being in good form.

Cricket South Africa on Tuesday announced that De Villiers has decided not to come out of international retirement, saying that his mind won’t change “once and for all”. His former teammate and current national coach, Boucher gave reasons behind De Villiers’ decision, saying that he doesn’t want to snatch the place of a player who has been in the mix for a while.

“AB has his reasons, which I respect. Unfortunately he’s no longer in the mix. I say unfortunately because I think we all agree that he’s still one of the best – if not the best – T20 players in world cricket,” Boucher was quoted as saying by ‘The Citizen’ website

“But he alluded to being concerned about coming in ahead of other players who have been a part of the system. I don’t think it sat well with him, which I understand. But as a coach I needed to try and get our best players, for the team and the environment. AB is an energy-booster in any environment, but I respect his reasoning. It was worth a go, but now let’s move forward,” he added.

CSA’s reportedly made the statement on Tuesday while announcing the team for a tour of the West Indies. In May 2018, De Villiers had announced his retirement from international cricket. He played 114 Tests, 228 ODIs and 78 T20Is before announcing his surprise retirement.

However, last month the 37-year-old versatile cricketer said it would be “fantastic” to make an international comeback ahead of the ICC World T20. The ICC World T20 is scheduled to be held in India in October-November.

“If I can slot in, it will be fantastic,” De Villiers had said after he playing match-winning innings for his franchise Royal Challengers Bangalore in the now-suspended IPL in April.

Speaking to the reporters in Chennai, De Villiers had then said he will have a chat with South Africa head coach Mark Boucher at the end of IPL 2021 while assessing his form and fitness after RCB’s campaign in the 14th season of the T20 tournament.

Denial of responsibility! TechiLive.in is an automatic aggregator around the global media. All the content are available free on Internet. We have just arranged it in one platform for educational purpose only. In each content, the hyperlink to the primary source is specified. All trademarks belong to their rightful owners, all materials to their authors. If you are the owner of the content and do not want us to publish your materials on our website, please contact us by email – [email protected]. The content will be deleted within 24 hours.
AB de VilliersAB de Villiers comebackBoucherbuthascomebackCricket South AfricaforceMark
Share

Beauty Regime: 4 Tips to Follow During Hectic Schedules and Stress

Cryptocurrency Has Yet to Make the World a Better Place