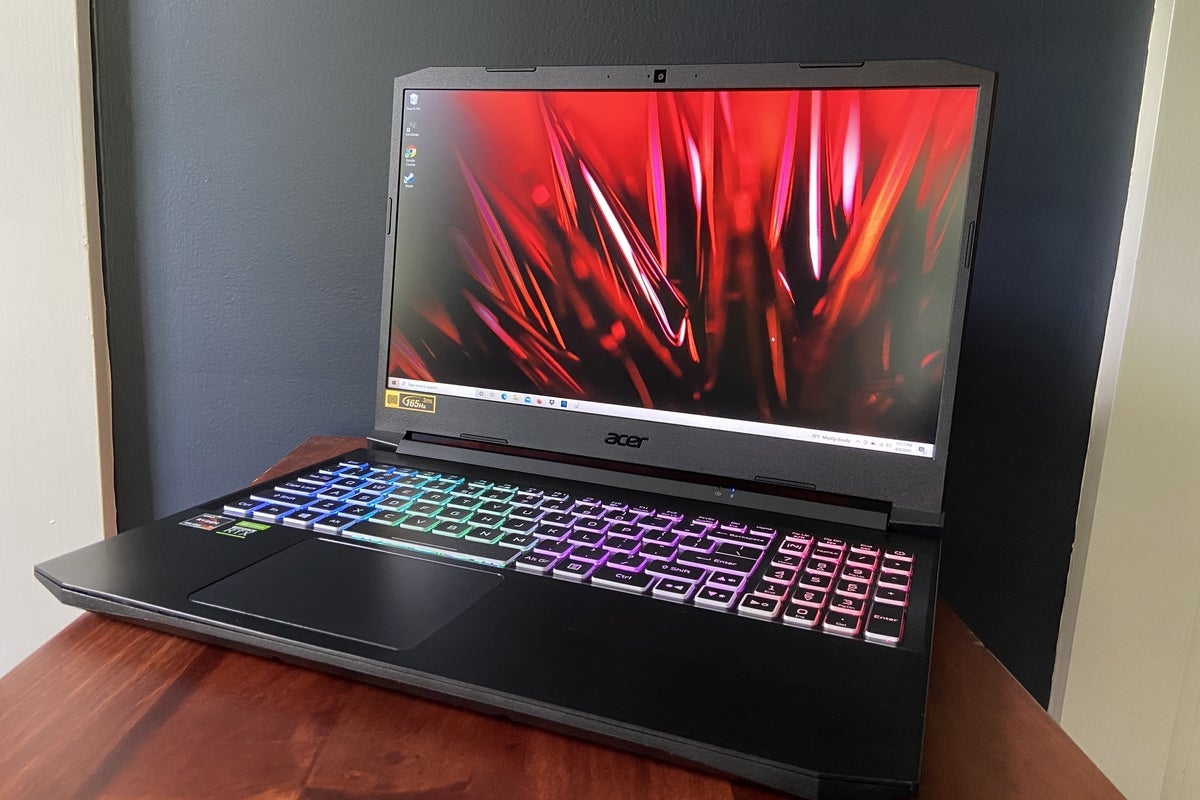 You’re likely accustomed to seeing models of Acer’s venerable Nitro 5 budget gaming laptop line with prices comfortably in the triple digits. The company extends the line into midrange gaming laptop territory with this configuration ($1,700 at Acer), which packs a QHD display powered by an AMD Ryzen 7 5800H CPU and Nvidia GeForce RTX 3070 graphics.

Despite its many charms and strong performance, the Nitro 5 takes a close second to the Asus ROG Strix G15 Advantage Edition, which remains the best gaming laptop value we’ve seen lately. The Nitro 5 has an obvious advantage in screen resolution, however: Its 15.6-inch QHD display lends a versatility to the Nitro 5 that makes it an excellent productivity machine as well. If you’re looking for a do-it-all laptop for both work and play, there’s a good argument to be made for the Nitro 5.

This review is part of our ongoing roundup of the best laptops. Go there for information on competing products and how we tested them.

Great value in a gaming laptop

Midrange components in a budget chassis

Premium parts or no, it appears that every Acer Nitro 5 uses the same bulky, plastic case as lower-cost models. I am much more accepting of such bulk and heft when priced below $1,000, less so as the price nears $2,000. The laptop is nearly all black, with only a few design touches geared toward gamers. You’ll find a piece of molded red plastic on the back edge between the laptop’s vents, and the front corners are angled to make the system appear somewhat less bulky than it really is. It already weighs 4.77 pounds, and you’ll need to lug around more than 6 pounds if you include the hefty power adapter.

The all-plastic chassis feels fairly solid and rigid. There is a hint of flex under the keys when typing, but the lid is more concerning, feeling very thin and flimsy. At this price, it’s not too much to expect a metal lid for increased rigidity behind the display. The similarly priced Asus ROG Strix G15 Advantage Edition, for example, features an aluminum lid and keyboard deck. The Nitro 5’s display bezels are also a bit on the thick side, which adds to the system’s overall hefty feel.

Back to the keyboard: The keys felt soft, yet responsive. They are quiet without feeling mushy. Acer squeezes in a number pad, with a sacrifice: The right-Shift key is shortened, which might take some getting used to. While I understand full-size arrow keys are useful for a gaming laptop, I really dislike having to give up some of my right-Shift key. I constantly hit the up-arrow key by accident when attempting to press the right-Shift key—very annoying. The arrow keys and the WASD keys are outlined to guide gamers to the buttons they mash most. Acer also highlights one more key—the special ‘N’ key above the numpad that launches Acer’s NitroSense utility.

The NitroSense utility lets you adjust the mode or speed of the cooling fans, select a power plan, and customize the RGB keyboard backlighting. You can set the color of the backlighting across four zones and select between static and dynamic modes. Most laptops at this price feature zone-lit keyboards, rather than per-key, so the Nitro 5 is right on trend.

The system is average in terms of fan noise. The fans kick in during games and other intensive graphics tasks and can clearly be heard, but they are rather quiet (not rarely silent) during lighter loads. I played with the fan settings in the NitroSense utility and tried out the CoolBoost setting that cranks up fan speed to optimize CPU and GPU performance, but found little change in fan noise or performance.

The touchpad looks a bit undersized, given the expanse of the keyboard deck, but it accurately recorded my mousing gestures. Its clicks felt firm with snappy feedback. No complaints here, other than believing Acer could have made the touchpad a touch wider.

Most Nitro 5 models you’ll encounter feature a basic 1920×1080 display, but this Nitro 5 boasts a QHD (2560×1440) panel. The added pixels may not pique the interest of gamers, who likely play the majority of their games at 1080p rather than 1440p, but the higher resolution is a bonus during productivity tasks because it provides a larger workspace and a finer image. Moving a step further to a 4K resolution on a 15.6-inch display is less useful—most users won’t notice much of a difference in resolution on this size of a display, and battery life suffers the higher the resolution gets. A QHD resolution is right in the sweet spot for a 15.6-inch laptop.

The display looked fairly bright and exhibited vivid color and good contrast. I played CS:GO in a sunny room and was able to see details in dark scenes on the Ancient and Militia maps. If a friend or two wanted to watch sitting next to you while you played, they’d be able to see the action because the display is an IPS panel. IPS technology delivers a wide viewing angle, so the display doesn’t look overly dim when viewed off axis.

The speakers provide merely average output. They have enough power to fill a small room but the sound is muddied, with little separation between high and mid tones, and little in the way of a bass response. Gamers will want to keep their headphones handy.

The 720p webcam above the display is underwhelming. Video suffered from noise and reddish skin tones. It also lacks a privacy cover.

The port offerings cover the basics (see photos of left and right sides, below). As with other AMD laptops we’ve seen, however, the USB-C port doesn’t include Thunderbolt support. And while you do get an HDMI port, you’ll need to make do without a DisplayPort connection.

Our Nitro 5 test system features a roomy 1TB SSD, and the laptop has room to add a second storage drive if you want to expand. Remove 11 screws from the bottom panel and you can get inside the laptop, where you’ll find a spot for a 2.5-inch drive. Acer thoughtfully includes in the box the cable and screws you’ll need to make such an addition. The DIMM slots are also easily accessible, but both were occupied in our test system, with an 8GB stick in each.

If not for the Asus ROG Strix G15 Advantage Edition, a good argument could be made for this Acer Nitro 5 config as the price-for-performance champ. Still, the Nitro 5 acquitted itself almost as well in labs testing.

Our first benchmark tests how a laptop is able to handle crushing CPU loads over a lengthy period—in this case, transcoding a 30GB MKV file to a format suitable for Android tablets using HandBrake, the free video encoding utility. The Nitro 5 bested the Intel Core i7- and i9-based competition and even edged the Ryzen 9-based Razer Blade 14. The Asus ROG Strix G15, however, took top honors.

Next up is Cinebench, another CPU-intensive test but one that renders a complex 2D scene over a short period of time. The Acer Nitro 5 again topped the Intel-based competition, but this time finished behind both Ryzen 9-based laptops. The Ryzen 9 5800HX and Ryzen 7 5800H CPUs are more similar than you might think—both feature 8 cores and 16 threads, with the Ryzen 9 5800HX offering a slight edge in base and max boost frequencies. We show multi-thread and single-thread results below.

Now it’s time to see how the Nitro 5’s RTX 3070 graphics chops stack up against laptops with RTX 3080 graphics and previous-generation RTX 20-series graphics, as well as the Asus ROG Strix G15 and its Radeon RX 6800M GPU. On 3DMark, the Nitro 5 not surprisingly slotted behind a pair of laptops with RTX 3080 graphics. However it topped the other RTX 3070-based laptop (the Asus ZenBook Pro Duo) and stayed well ahead of the RTX 3060-based Acer Predator Triton 300 SE. The Asus ROG Strix G15 Advantage Edition finished first, and by a healthy margin.

Moving on to real-world games, we first run Rise of the Tomb Raider at 1920×1080 resolution set to Very High and in DX11 mode. The Nitro 5 turned in a very playable framerate of 101 fps, as we’d expect an RTX 3070-based laptop to do on an older game at these settings. We also ran the benchmark with CoolBoost enabled, and the framerate actually dropped slightly to 99 fps.

We test laptop battery life by looping a 4K video using the stock Windows Movies & TV app, with screen brightness set to about 250 nits and the volume dialed to 50 percent, with headphones plugged in.

It’s rare to find a gaming laptop with decent battery life, and the Nitro 5 is not an exception to this rule. It lasted less than 5.5 hours on our battery-drain test, which is a bit below average. Mind you, video rundown is much less demanding than gaming, so don’t expect to frag bots for long off AC.

The Acer Nitro 5 we tested costs more than most models in the Nitro 5 line, better known for its sub-$1,000 budget offerings. It’s somewhat disappointing to be paying more for a laptop that’s still dressed in bargain-bin clothing, but if you can get past the aesthetics, this Nitro 5 model delivers outstanding midrange gaming laptop performance. With an AMD Ryzen 7 CPU and RTX 3070 graphics, it outperforms laptops that cost hundreds more. And while its QHD 1440p display may not be of interest to gamers, the bump up in resolution from the more common FHD 1080p panel provides additional value because it makes the Nitro 5 a more useful productivity machine—as long as the shortened Shift key doesn’t drive you crazy.

If it weren’t for that pesky Asus ROG Strix G15 Advantage Edition, the Acer Nitro 5 would be a greater value. Still, it’s one of the better (if not the best) deals out there, and well worth considering.

Loading...
Denial of responsibility! TechiLive.in is an automatic aggregator around the global media. All the content are available free on Internet. We have just arranged it in one platform for educational purpose only. In each content, the hyperlink to the primary source is specified. All trademarks belong to their rightful owners, all materials to their authors. If you are the owner of the content and do not want us to publish your materials on our website, please contact us by email – [email protected]. The content will be deleted within 24 hours.
AcerDisplaygadget updategaminggreatNitroreviewtech news
Share

Windows 11: 4 biggest design changes it will bring to your PC – Times of India