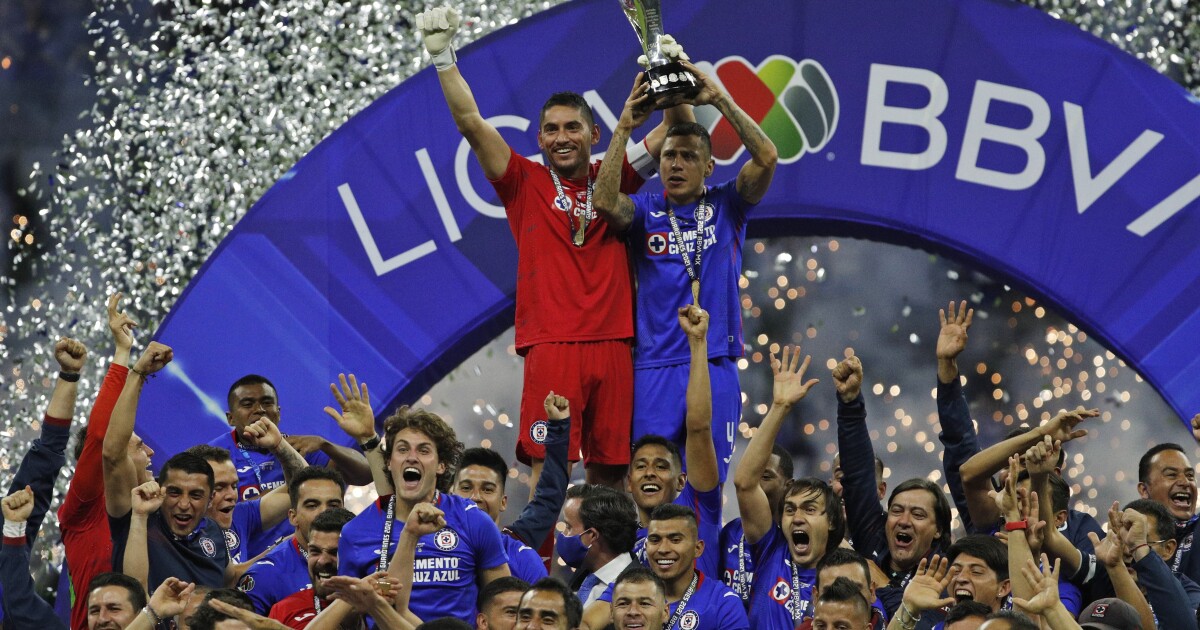 After 24 years of memes and mockery, a cursed Mexican soccer team wins big

There was once a sports team so cursed that its very name became slang for “choke.”

The team was Cruz Azul, a professional soccer club based in Mexico City with a flair for losing critical matches in spectacular fashion — including six league finals since 1999. The repeated humiliations spawned a verb — cruzazulear — that the Mexican Academy of Letters defines as “losing a game when victory was practically assured.”

To be a fan of the club was to be the butt of a national joke: Die-hard supporters endured not only the heartbreak of loss but also relentless teasing.

Then on Sunday, after decades of disgrace, the unthinkable happened. With a second-half goal from Uruguayan forward Jonathan Rodríguez, Cruz Azul won the Mexican league championship — its first title in 24 years.

“The curse is over,” tweeted President Andrés Manuel López Obrador — no small thing given that his preferred sport is baseball.

Cesar Ramírez, a 38-year-old accountant, danced, sang and sobbed with strangers at the massive celebration downtown.

“They have made us suffer so much,” he said of the team, which he compared to a tempestuous lover. “But here we are.”

Eugenio Derbez, a Cruz Azul devotee and actor who played a long-suffering supporter of the team on a popular television series, uploaded a video after the victory Sunday night in which he appears dazed. “I can’t believe it,” he says over and over.

Founded in 1927 by the Cruz Azul cement company, the team steamrolled its way to six league championships in the 1970s, earning its nickname: “The Locomotive.”

Then came the blood curse.

Its origins, according to lore, date to a league final held in 1997, which paired Cruz Azul against Club Leon.

The score was tied in the final minutes of the second half when Leon’s goalkeeper, Ángel Comizzo, kicked Cruz Azul’s striker, Carlos Hermosillo, in the face.

A referee asked Hermosillo to tend to the blood streaming from his temple before he took a penalty kick, but he refused and then proceeded to score and win the game.

But from that point on, the team would repeatedly perform well during the regular season and come close to winning a championship, only to lose in a gut-punch.

Typical was the 2013 finals, when the team faced off against its rival, America. With five minutes left, Cruz Azul led by two. Then came a pair of swift goals from America, including an unfathomable header from the team’s goalie that ricocheted off the cleat of a Cruz Azul defender before sailing into the net. America won the game in penalty kicks.

The team’s terrible luck has drawn comparisons to the Boston Red Sox, who were supposedly cursed for decades after the club traded Babe Ruth to the Yankees, and the Chicago Cubs, who according to legend were damned to lose by a tavern owner angry that his pet goat was not welcome at Wrigley Field during the 1945 World Series.

Leon Krauze, a Mexican historian and lead anchor at KMEX, Univision’s station in Los Angeles, said he knows there is no such thing as a curse. But he doesn’t know how else to account for the team’s bad karma.

“It was beyond the explainable,” he said. “Do we need to declassify UFO videos to understand this?”

Krauze’s first memory is the Cruz Azul game his father took him to in 1979. He was four years old.

The rest of his family rooted for America. But Cruz Azul’s prowess and the roar of the crowd converted him for life — setting him up for decades of disappointment.

Krauze hoped his children would be fans, but the team’s repeated flubs tested their patience.

“I sort of saw the love for the team slipping away from my son,” he said of the club’s 2013 title loss. “I almost did not forgive that.”

Mexico’s championships are typically decided over two games, with one held in the home stadium of each team.

Cruz Azul went into Sunday’s final game at the legendary Estadio Azteca leading the series 1-0. That meant all the team needed was a draw or better to win the whole thing.

As kickoff neared, it seemed to Krauze that all of Mexico was rooting for his team. He received messages of support even from frenemies who had long mocked his loyalty.

“Even my antagonists in the sports world said, ‘I hope you guys win, because it’s not even funny anymore.’”

When Jonathan Rodríguez scored on Sunday, Krauze tried not to get his hopes up. He said he thought to himself: “I’ve seen this movie many times.”

But then the clock ran out.

Krauze embraced a Cruz Azul flag he has had for more than two decades. His kids hugged him as he cried.

The win, for a brief moment, seemed to unite Mexico, battered by the coronavirus pandemic and a resulting economic crisis, and bitterly divided ahead of midterm elections Sunday.

“Where were you hiding, Cruz Azul?” tweeted David Faitelson, a Mexican sportscaster. “Your euphoria and repressed glory appear like a balm of hope in difficult times.”

Former President Vicente Fox took the opportunity to mock López Obrador and his self-described “Fourth Transformation,” a political project to roll back the free-market policies of his predecessors.

“If Cruz Azul could do it, we can remove the curse of the 4T,” Fox tweeted.

But mostly, there was joy.

As the sweating, smiling players accepted their trophies, Felipe Romero, a 47-year-old architect, called his father, who had taken him to his first Cruz Azul game years earlier.

For years, Romero said, they “had suffered together.” It felt wonderful, he said, to finally be able to celebrate together, too.

Then he ran into the street with a Cruz Azul flag.

Cecilia Sanchez in the Times’ Mexico City bureau contributed to this report.

Denial of responsibility! TechiLive.in is an automatic aggregator around the global media. All the content are available free on Internet. We have just arranged it in one platform for educational purpose only. In each content, the hyperlink to the primary source is specified. All trademarks belong to their rightful owners, all materials to their authors. If you are the owner of the content and do not want us to publish your materials on our website, please contact us by email – admin@techilive.in. The content will be deleted within 24 hours.
Loading...
bigCursedmemesMexicanmockerynews updateSoccersports news
0
Share