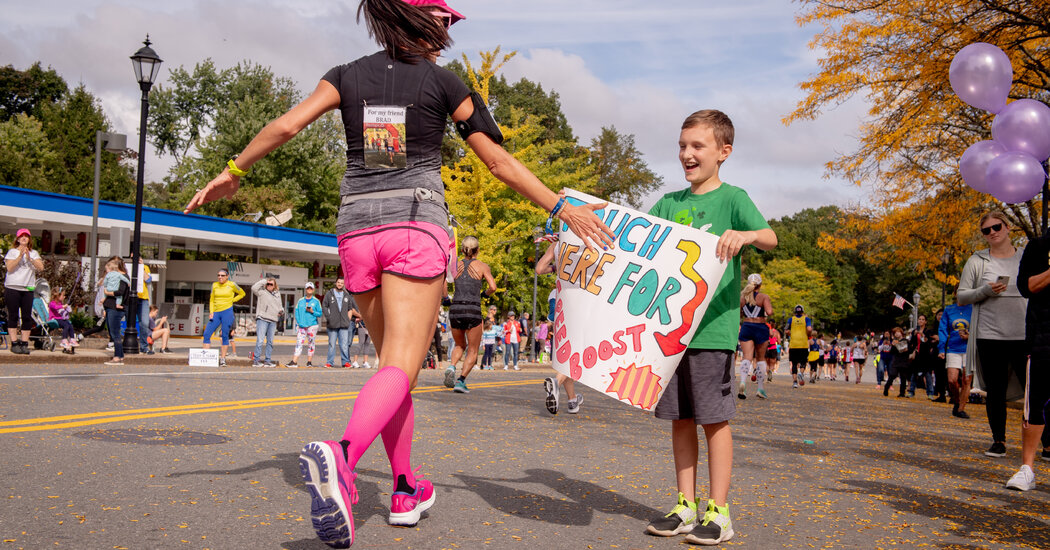 After a Long Wait, the Boston Marathon Returns as a Fall Classic

BOSTON — After running more than 26 miles through the streets of greater Boston on Monday, Edna Havlin, a marathoner from Brazil, threw her arms up as she crossed the finish line. “We’re back!” she shouted as spectators cheered.

She seemed to speak for the hopes of an entire city, and an entire sport.

Years from now, everyone who lived through the pandemic will remember a moment when life began to feel nearly normal. For the residents of Boston and the runners in the Boston Marathon, that moment may have come Monday.

After the 2020 race was canceled and this year’s event was postponed from the spring to the fall, the city was finally doing one of the things it does best: staging the oldest and most prestigious modern marathon, in its 125th year, after a long 18 months when the most obsessive distance runners could not celebrate their passion in their favorite way.

“It’s been two years, and I’m a mom, I have two kids — it’s been hard,” Margaret Klimek said through tears just after she finished her fourth Boston Marathon, achieving her personal best time in the process. “It just feels so good to be out here doing this.”

Along a 26.2-mile course lined with yard parties and screaming fans at nearly every point in the race, this version of the marathon was different only on the margins. It was smaller, downscaled from the usual 30,000 runners to about 20,000, all of whom had to be vaccinated or recently test negative for the coronavirus. Runners were required to wear face masks while riding the buses to the starting line; once they got off, they were allowed to begin the race as they pleased instead of waiting for a specific time.

Jie Zheng has traveled from Virginia to run in every Boston Marathon since 2006, but she said her races following the bombing near the finish line in 2013 have had particular significance. “The running community, we want to support each other,” she said. “It was important to keep coming to Boston to show the running spirit — that we are not getting scared, we are all family together.”

Among the elite runners, the men’s and women’s races were similar in that they were won by Kenyans unaccustomed to winning major marathons. But they unfolded in dramatically different ways.

On the men’s side, C.J. Albertson, an unheralded American, raced to a two-minute lead and improbably stayed there until the hills in the race’s late stages. Then Kenya’s Benson Kipruto, whose biggest wins had come in Prague and Toronto, caught and passed him and raced to victory alone in 2 hours 9 minutes 51 seconds, finishing 46 seconds clear of the field. Ethiopian runners finished second, third and fourth.

The race was slower than expected, Kipruto said through a translator on local television. “They really help when they cheer us,” he said of the fans.

Albertson, running on his 28th birthday, hung on to finish 10th.

In the women’s race, an unexpected winner, Diana Kipyokei of Kenya, emerged from the pack at 18 miles, took the lead, was caught, then pulled away again for the win in 2:24:45. It was her major marathon debut. Edna Kiplagat, a 41-year-old veteran from Kenya, was second, and Kenyans also finished third and fourth.

The hills at the end of the marathon were the hardest part of the race, Kipyokei said through a translator.

The wheelchair winners were better known, and their wins were more decisive. Marcel Hug and Manuela Schar, both of Switzerland, each grabbed leads from the gun and blew away their competitors for easy victories. The main drama came when Hug missed a turn near the finish, costing him a few seconds and probably the course record, which would have brought him a $50,000 bonus. Hug had finished second in the Chicago Marathon only a day earlier.

“Just a stupid mistake for myself,” Hug said, adding: “I’m also upset with this. It should not happen.”

And it was four down and two to go for Shalane Flanagan, who successfully continued her quest to run all six major marathons each in under three hours over a six-week span. She ran 2:40:34, good for 33rd place among women.

As the runners sped by, there were beers and barbecues in front yards from Hopkinton to Ashland, and from Natick to Newton.

The women of Wellesley College resumed their tradition of the “scream tunnel” in the 13th mile, though they skipped their usual contest to see who could kiss the most runners, for obvious reasons. (The Boston Athletic Association strongly encouraged participants and spectators to practice “personal responsibility,” which included “refraining from kissing a stranger around the halfway mark,” the organizers wrote.)

Signs adorned the barricades that lined the street, with an understandable shift: “Don’t kiss me,” they read, along with “Hey CK run your little buns off!,” “Sarah Frey the struggle isn’t real today!” and “You’re halfway there!”

And so it was for 26.2 rollicking and, at times, eardrum-splitting miles. Boston would not want it any other way, especially after organizers had to turn the 2020 race into a virtual event and move this year’s marathon to October from its usual spot on Patriots’ Day in April.

A duo that plays the bongos every year beside one of the treacherous hills in Newton was there. So were the students of Boston College, and the throngs on Boylston Street for the final 800 yards to the finish, where the cheers echoed off buildings and so many runners pulled out their phones to record their final strides for posterity, having learned the hard way to never take this sort of moment for granted.

Denial of responsibility! TechiLive.in is an automatic aggregator around the global media. All the content are available free on Internet. We have just arranged it in one platform for educational purpose only. In each content, the hyperlink to the primary source is specified. All trademarks belong to their rightful owners, all materials to their authors. If you are the owner of the content and do not want us to publish your materials on our website, please contact us by email – [email protected]. The content will be deleted within 24 hours.
BostonclassicFalllongmarathonnews updateReturnssports news
Share