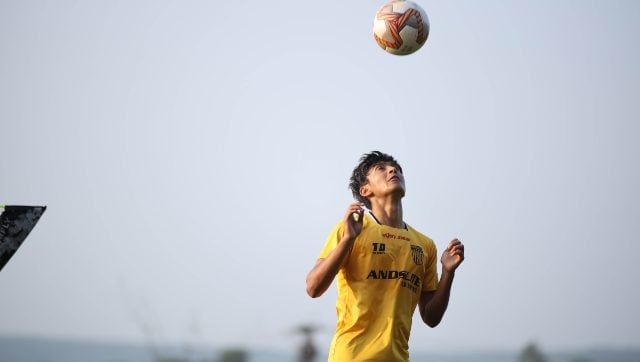 After fighting injury and missing the whole 2019-20 season, Hitesh Sharma made a memorable comeback with Hyderabad FC last season. He now aims for much bigger things.

Forced into lockdown due to the COVID-19

pandemic, India and Hyderabad FC midfielder Hitesh Sharma has few options to train and practice. But for a professional footballer, the process of learning never stops.

Having spent most of his life away from home, in academies and on the road with football teams, the Jalandhar native is relishing his time back. At the same time, the preparation for the next Indian Super League (ISL) season is underway.

“I analyse my performances a lot,” Hitesh tells Firstpost. “I have been watching my matches (from last season), and our coaches have also given us a plan to follow. I am analysing my videos, trying to find the weaknesses and improve them step-by-step.”

The 23-year-old footballer has good reasons to focus on improving his skills. In the last ISL season, Hyderabad FC, also referred to as The Nizams, defied the odds to finish fifth in the table, narrowly missing out on the play-offs.

This was a big shift for a team that finished at the bottom of the pile in their first season. The revolution was led by a plethora of young Indian footballers who executed a daring and eye-pleasing brand of football on the pitch. One of the stars of Hyderabad’s memorable campaign was Hitesh, who played 15 matches, making 13 starts.

It was his third season in the ISL, having earlier played 27 games for the erstwhile ATK. However, for the first time in his career, Hitesh clocked over 1,000 minutes on the pitch in a season.

It was the season that made people sit back and take notice of the player who once lit up the Cooperage Football Ground in Mumbai with his flashes of genius during his Mumbai FC days but lost his sheen due to injury and prolonged absence.

Hitesh joined ATK in 2017 after playing a season with the now-defunct I-League club and spent two seasons with the Kolkata side. However, an ankle injury rendered him without a club for the 2019-20 season. Eventually, he was snapped up by Hyderabad in January 2020. He debuted in the 2020-21 season, more than a year after his last match.

“My journey has had ups and downs, that happens with everyone. The last season was impacted with injuries and transfer but this season was very important for me to show that Hitesh is still alive,” says the footballer.

Initially Hitesh was largely deployed as an attacking midfielder or winger, however, Hyderabad utilised him in a little withdrawn role where he excellently complimented their quick full-backs and wingers. He often played as a central midfielder in the 4-4-2 formation or as a defensive midfielder in the 4-2-3-1 formation. What impressed the most about him was his tactical awareness, ability to stitch passes and build attacking moves. He also proved to be a constant nuisance for the opponents with his high work rate.

The spectacular season that the Punjab footballer had with Hyderabad also led to him extending his contract by two more years in March.

There are obviously the long shifts of training behind Hitesh bouncing back from the frustrating injury break, but another aspect of him that has gone under a transformation is his mental preparation and how he handles praise now.

“In the early days, I used to get distracted after playing a few matches or I use to derive some satisfaction, but now my aim is to improve at every step. From the beginning of the season, I wanted to prove something and may be because of that this time I didn’t stop after few matches. Even after I received a bit of hype, I was like there’s a lot more to achieve. The season was good, but still, I want to have many good seasons and that’s my main focus right now,” reveals the player.

Not satisfied anymore with few good outings or one excellent season, Hitesh has a clear-cut plan on what he needs to do to improve his skills as the competition for midfield places continues to heat up, both at Hyderabad and for India national team.

“Basics of the game are very important, how you handle the game…My focus is on using space and time more effectively. There’s a lot of competition and hence it’s very important to improve at every step. There have been few mistakes in the past, but those won’t be repeated,” reveals the former Chandigarh Football Academy and Tata Football Academy product. A large amount of credit for Hyderbad’s noteworthy 2020-21 season goes to coach Manolo Marquez. The Spaniard was a late replacement for Albert Roca who joined FC Barcelona’s support staff. Despite having no experience in Indian football, Manolo excelled in his first season by using his experience and blending it with the young Indian talent and attacking football.

Hitesh explained how Manolo handled the young footballers to bring the best out of the players.

“He is very experienced and through that experience, he is able to read the mind of his players. He is able to determine what one is going through and how to handle him. His style was to handle the young players in such a way that we don’t get hyped a lot but also made sure that our confidence doesn’t dip,” the Hyderabad footballer says.

“He focuses a lot on the mental side of young players and eventually, it leads to improvements in all aspects. Because we were in a bubble, the mental side of the game was very important. He brought positivity to the camp because of which the stay was always fun and the season went so well.”

Elaborating more on Manolo’s tactics, which included heavy usage of fast wingers and full-backs to attack the opposition’s goal and capitalising on the space on the flanks, Hitesh added that a lot of credit also goes to the experienced players of the club who stayed in the back, taking responsibility and allowing the youngsters to play their natural game.

“Mostly all the wingers and full-backs of Hyderabad are young, we were very excited. The coach didn’t curb our excitement, whether Akash (Mishra) or Asish (Rai), the coach properly used them but he also used our experienced players very well who covered for us. Everyone sees that young players did very well, but how Odei (Onaindia) and Joao Victor provided cover to us has not got the deserved limelight. Mainly, the coach gave freedom to young players, alongside giving responsibility to the experienced players which they performed excellently,” adds Hitesh.

Hitesh’s heroics with the Hyderabad side led to a call-up to the national team for the March friendlies against Oman and UAE. He had earlier been part of the youthful Indian sides for AFC U-23 Championship Qualifiers and SAFF Championships, but this was his first call-up to the senior setup. His involvement, however, lasted only for a few minutes against UAE. Nonetheless, it was a huge learning curve for the footballer, one that has only made him more hungry and ambitious.

“The senior national team call-up was a reward for my hard work and for the faith that Hyderabad FC coaches showed in me. Igor Stimac is also a very detailed coach. He gives you a lot of small details and if you are able to cover it in your game then you can do very well,” Hitesh says.

“My ultimate aim is to play regularly. To have one good season is easy but the difficult part is to sustain it. My aim is to be a regular at the top level.”

Loading...
Denial of responsibility! TechiLive.in is an automatic aggregator around the global media. All the content are available free on Internet. We have just arranged it in one platform for educational purpose only. In each content, the hyperlink to the primary source is specified. All trademarks belong to their rightful owners, all materials to their authors. If you are the owner of the content and do not want us to publish your materials on our website, please contact us by email – [email protected]. The content will be deleted within 24 hours.
aimsBreakoutFirstpostgrowthSportsHiteshHyderabadNewsnews update
0
Share

Flipkart in Talks to Raise $3 Billion From SoftBank, Others: Report