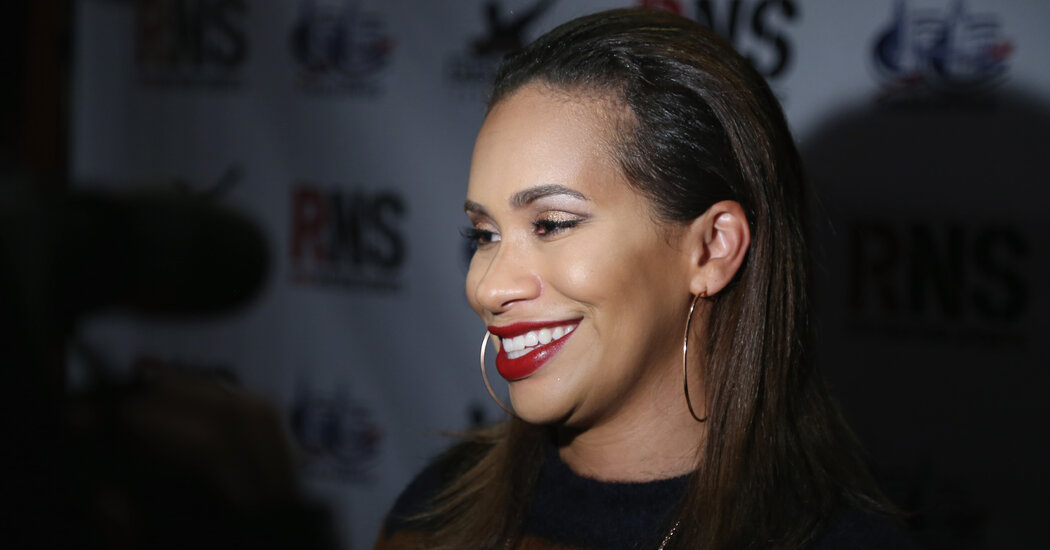 After Years in a Supporting Role, Amber Sabathia Is in Charge

C.C. Sabathia has often joked that once he announced his retirement from the Yankees, he stepped aside and let his wife, Amber, get to work.

Throughout his career, she had: Running their family of four children, guiding him through the highs (an American League Cy Young Award and a World Series title) and the lows (alcoholism and injuries), and counseling him through contract negotiations. Particularly in 2019, the last of his 19 major-league seasons, she served as an executive producer of a documentary about his life, and organized his farewell tour.

“C.C. said, ‘You know, you would make a great agent,’” Amber Sabathia said in a phone interview. “And we laughed about it and he said, ‘No, seriously, you’ve been my agent the past seven years.’”

With experience amassed from over two decades inside the baseball industry as an adviser, philanthropist, marketer, wife and mother, Sabathia formalized that step last week when Creative Artists Agency announced that it hired her as an agent. She has already passed a background check through the Major League Baseball Players Association and can begin operating as an agent as she prepares for a test in September that will finalize her ability to represent a player on a major-league roster.

In becoming an agent, Sabathia has made a unique transition, but one she hopes will highlight how much of a force women are in baseball, even though they are often overlooked in the male-dominated industry.

Despite more women working in baseball, it took until 2020 for one to be hired as a full-time major-league coach (Alyssa Nakken of the San Francisco Giants) and as a general manager of club (Kim Ng of the Miami Marlins). Sabathia is not the first female baseball agent — Charisse Dash and Lonnie Murray, for example, have been working as agents for more than a decade — but she will be the first to negotiate playing contracts at C.A.A.’s baseball division.

“For so long, it was thought that a man needs to advise you, a man needs to be your agent and a man needs to negotiate your contracts, when the women are so impactful, and the wives and the girlfriends are a huge part of that,” Sabathia said. “Being a woman in M.L.B., I hope that what I can do is bring that side and let people know that it doesn’t matter if you’re a man or a woman. If you’re smart, you’re structured, you have drive, you can be an agent as well.”

“It doesn’t just start and end with the players,” she said. “It’s the front office, it’s the agents, it’s everybody involved with teams and ownership.”

For so long, Sabathia prioritized her husband’s career. They met while at Vallejo High School in their Northern California hometown. Back then, when C.C. was a top pitching prospect, she didn’t dream of becoming an agent. In fact, she wanted to be a teacher. She attended San Diego State University for three years, finishing the final two semesters of her liberal studies degree at San Francisco State University while her husband played for Cleveland.

“I was literally driving to San Francisco State, dropping my kids off at the day care on campus, going to school all day and picking them up,” said Sabathia, who later received a certificate in philanthropy and fundraising at New York University while her husband pitched for the Yankees.

Even though Sabathia’s husband had agents — currently Kyle Thousand at Roc Nation Sports — she said she worked alongside them, from when her husband signed a seven-year, $161 million deal to come to New York before the 2009 season through the multiple extensions to stay. She co-founded and served as the executive director of the Sabathias’ PitCCh In Foundation.

As their oldest child, Carsten Charles III, who is 17 and known as Little C, began playing baseball, Sabathia wondered if she could do the same for him as she had for husband, now 40. And she began dabbling in helping other players, like the outfielders Aaron Hicks and Aaron Judge on the Yankees, with their charitable efforts.

So with her husband’s encouragement, Sabathia plunged ahead. At home in New Jersey during the pandemic shutdown last year, she said she began researching, reading the rules, applying, and talking to men and women throughout the industry about becoming an agent.

She said she interviewed with four agencies, and she immediately felt comfortable with the five co-heads of baseball at C.A.A. She said one of the reasons she picked them is because they didn’t ask her once about her husband.

“This wasn’t about his career,” said Jeff Berry, a co-head of C.A.A. Baseball, in a phone interview. “This was about her career, and how she can help further our agency.”

Berry said Sabathia’s 20-plus years in baseball, her unique perspective, her passion for players, her motherly compassion and her business acumen were assets. He said she was as competent and qualified as anyone in the room, and that will only improve as she learns more about the contractual side.

“She comes at it from a different background, but it’s one we’re really excited about,” he said.

Sabathia said her first days have involved meetings at the agency, soaking up everything on how to represent players — in particular salary arbitration and negotiations — and sleeping little. Although she said she doesn’t have any clients yet, she joked that she would continue advising her oldest baseball-playing son.

Before her new job was announced, Sabathia said she worried that people would roll their eyes at the news that C.C.’s wife was becoming an agent. But she said the reaction has been encouraging, including from players not represented by C.A.A. — proof, she said her husband told her, that people recognized how much of a role she played in his career.

“She’s built for this!!” wrote her husband, now a stay-at-home dad and avid golfer, on Instagram. Added Ian Desmond, a Colorado Rockies infielder-outfielder and C.A.A. client who has sat out the past two seasons: “This is progress.”

After the announcement, Sabathia said she noticed news reports referring to her as C.C.’s wife. It was an example of a woman’s career viewed through a man’s lens. But she said she had no issue because she understood that the Sabathia name carried a lot of weight and that her husband’s career was an example of the skills she brought to the table.

“But as the years go by — or not even years, maybe this year — and I fill my client book and they see what I do, then I’ll be known as Amber Sabathia, the player agent,” she said.

She added later, “Maybe he’ll go by Amber’s husband in a couple of years.”

Loading...
Denial of responsibility! TechiLive.in is an automatic aggregator around the global media. All the content are available free on Internet. We have just arranged it in one platform for educational purpose only. In each content, the hyperlink to the primary source is specified. All trademarks belong to their rightful owners, all materials to their authors. If you are the owner of the content and do not want us to publish your materials on our website, please contact us by email – [email protected]. The content will be deleted within 24 hours.
Amberchargenews updateroleSabathiasports newssports updateSupporting
0
Share

The rising Korean wave in India