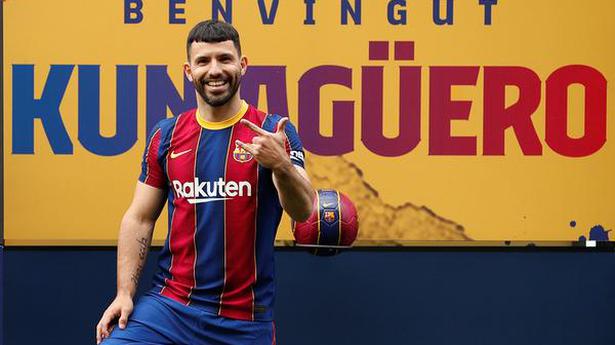 Sergio Aguero said on Monday that he was hoping to have the “pleasure” of playing alongside Lionel Messi after signing a two-year deal with Barcelona.

However he is still not sure that Messi will be his teammate next season as the club captain is yet to sign an extension to his current contract which expires next month.

“Let’s hope we play together … what happens with Leo is down to decisions that he will make with the club,” Aguero told reporters at the Camp Nou after he was unveiled on the famous pitch.

“Obviously it will be a pleasure if we play together. If he continues here, which I think he will, we will try to do our best for the club as he always has done.”

Barca will hope Aguero’s arrival in Catalonia helps to convince his friend and fellow Argentine Messi to stay, as the club faces up to declining performances on the pitch and a worrying financial situation.

Ronald Koeman’s side finished third in LaLiga this past season and has debts of €1.2 billion.

It was knocked out of the Champions League at the last-16 stage by Paris Saint-Germain, and could yet face sanctions from UEFA for refusing to back out of the short-lived European Super League project.

Last week club president Joan Laporta said that talks for Messi’s new contract were “going well”, and on Monday insisted that Aguero’s signing was part of a broader Barca rebuild.

“The signing of Aguero is for Aguero. We want to build a competitive team and obviously we also want Leo to stay, we have already told him this,” Laporta said.

Aguero leaves City as its all-time record goalscorer with 260 goals, and with the most goals scored for a single club in Premier League history — 184 goals in 275 appearances.

“A knee issue kept me out for a few months, I recovered, I got COVID … but in the last four months I’ve felt very good physically.”

Long in the offing

His move to Barcelona had been long in the offing, with Guardiola saying a week ago that he was close to a deal with the Catalan giant.

He will participate in this year’s Copa America, which on Monday was moved from Colombia and his home country Argentina to Brazil.

“If they have made that decision it is because things are not going well in Argentina, there have been a lot of infections over the last few days and many deaths. I think it was a good decision,” said Aguero.

Denial of responsibility! TechiLive.in is an automatic aggregator around the global media. All the content are available free on Internet. We have just arranged it in one platform for educational purpose only. In each content, the hyperlink to the primary source is specified. All trademarks belong to their rightful owners, all materials to their authors. If you are the owner of the content and do not want us to publish your materials on our website, please contact us by email – [email protected]. The content will be deleted within 24 hours.
Loading...
aguerofootballHopingmessinews updatePartnershipSoccersports news
0
Share