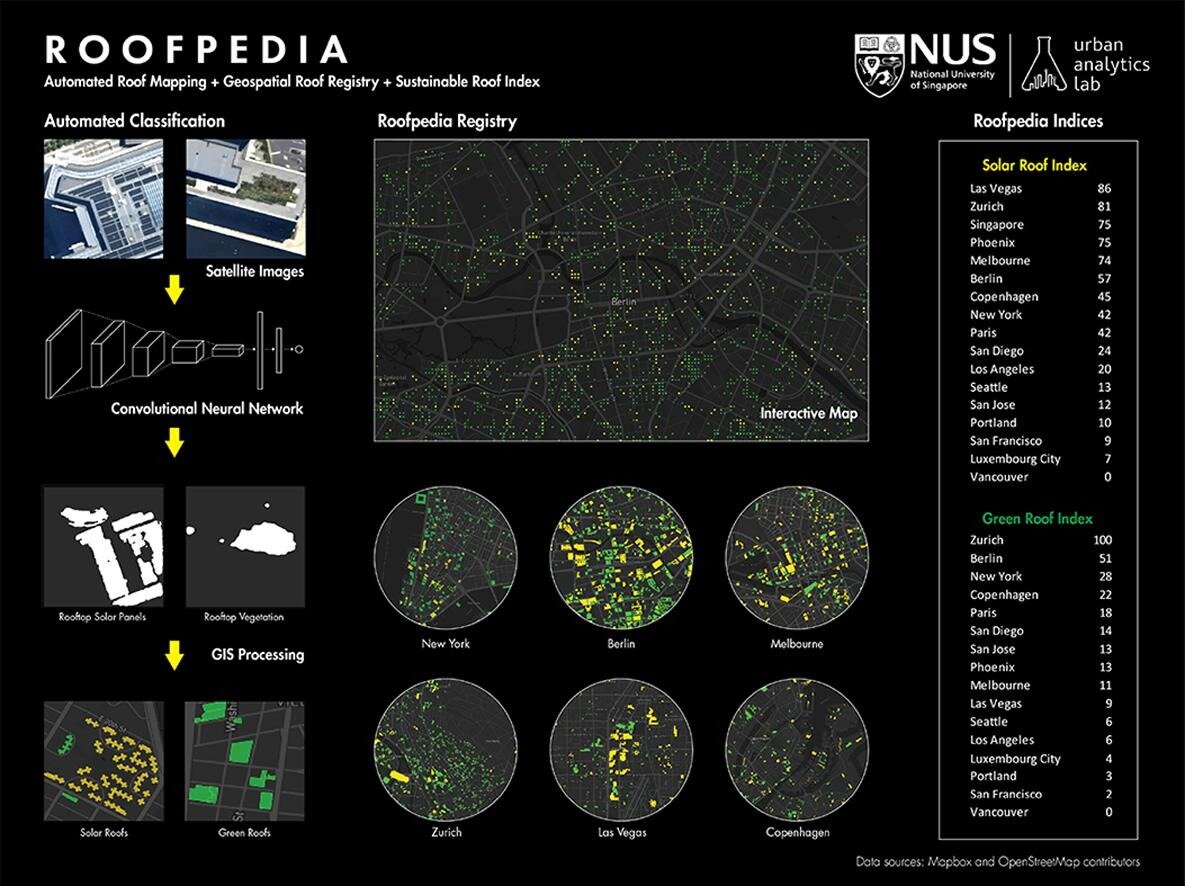 As cities around the world continue to urbanize, there is a greater need to expand and optimize existing spaces. Cities have accelerated looking into how underutilized rooftop spaces might contribute to climate action, food production, and other purposes. Sustainable roofs, such as those with greenery and photovoltaic panels, can contribute to the roadmap for reducing the carbon footprint of cities but while studies have been done to gauge their potential, few track the actual performance of cities.

To tackle this, Dr. Filip Biljecki, Presidential Young Professor from the Department of Architecture at the National University of Singapore (NUS) School of Design and Environment, and NUS Master of Architecture graduate Mr Abraham Noah Wu developed an automated tool that uses satellite images to track how rooftops around the world adopt solar panels and/or vegetation. Known as Roofpedia, it uses a fully convolutional neural network (deep learning) which allows researchers and policymakers to study how cities worldwide are greening their rooftops and using them for photovoltaic installations.

This is a research project under the NUS Urban Analytics Lab, a multidisciplinary research group at the NUS School of Design and Environment. Their research was published in the international journal Landscape and Urban Planning.

Using this data, the researchers developed the Roofpedia Index, to benchmark the cities by the extent of sustainable roofscape in terms of solar and green roof penetration. This is derived by considering both the area coverage and the number of buildings equipped with solar and green roofs in a city as a percentage value of the entire area.

Zurich was given an index score of 100 due to its high scores in both area coverage and number of buildings for green roofs. The high green roof coverage is the result of efforts taken by the Zurich City Government in making Green Roofs mandatory for all new buildings since 1991. Las Vegas was tops in the solar roof adoption in the Index with a score of 86. This could be due to the high solar potential of the geographical area.

“By collecting such data, Roofpedia allows to gauge how cities might further utilize their rooftops to mitigate carbon emissions and how much untapped potential their roofscapes have. For example, users might complement Roofpedia with other sources of data to study the effectiveness of governmental subsidies and whether climate pledges of others have been followed. In addition, by collecting current data through satellite imagery, users can more accurately determine the present carbon offsetting capacity of cities as well,” Dr. Biljecki shared.

Based on the Roofpedia Index, Singapore is ranked third out of the 17 cities, with a score of 75, for rooftop solar adoption, trailing behind Las Vegas (score of 86) and Zurich (score of 81). The scores in the Index are normalized, and while Singapore scored highly on total area coverage, it is behind some other cities for having relatively fewer buildings equipped with solar panels.

Mr Wu said, “While Singapore has ambitious plans to considerably expand its solar energy deployment by 2030 as part of the SG Green Plan, rooftop solar deployment is largely driven by the government. As such, Roofpedia indicates a higher concentration of solar-enabled buildings in heartland areas such as Woodlands, Jurong, or Ang Mo Kio as compared to other districts like Pasir Panjang. Singapore’s relatively lower score for the number of buildings equipped with solar panels indicates that there is potential in engaging private residential and commercial buildings to further maximize Singapore’s rooftops.”

Mr Wu elaborated that the scoring system considers both building count and total building area, thus allowing users to study the degree of adoption by individual owners as well as the overall extensiveness of rooftop solar and vegetation cover in other cities.

The researchers emphasized that each city has its unique characteristics, and the exact benefit of greenery or solar panels on rooftops much depends on the urban form and design. The geolocation and macroclimate of the city also plans a part. For instance, in drier areas, green roofs are harder to maintain while in rainy and dark areas, solar roofs may not make economic sense. Taking these limitations into consideration, a city could still be environmentally progressive without a sustainable roofscape.

Dr. Biljecki explained, “Vancouver may not score well in the Index but is nevertheless consistently ranked as one of the most sustainable cities in the world with access to plenty of hydropower, providing for 25 percent of the city’s energy need alone, and has plans to derive 100 percent of the energy used from renewable sources before 2050. What the Roofpedia Index does is that it can complement existing sustainability indices by adding a new dimension of consideration in assessing the overall sustainability of a city.”

The research team has made Roofpedia’s data of 1 million rooftops openly accessible and hopes to encourage other scholars onboard to collaborate with them to expand the database by tracking more cities or including other environmental indicators.

Dr. Biljecki shared that the accuracy of Roofpedia’s results would depend on the quality and period of satellite images provided as well as whether the approach would distinguish other man-made features (such as skylights) from solar panels. However, when the data is aggregated at the city-scale, Roofpedia can generally indicate how sustainable a city’s rooftops are, enabling cross-city comparative analyses.

“Our project is designed to be open as cities today are dynamic and rapidly adopting sustainable instruments. In addition, its design is modular, meaning that new geographies, roof typologies, and functions can be added. As such, our research group is planning to add a temporal feature so that users can study the evolution of sustainable rooftop measures over time and how much more cities might increase their roofscapes. We hope that our work can aid researchers, local governments, and the public in understanding and promoting the further use of rooftops in achieving sustainable urban development for a carbon neutral world,” Dr. Biljecki said.

Green roof or solar? It turns out both is best

Loading...
Denial of responsibility! TechiLive.in is an automatic aggregator around the global media. All the content are available free on Internet. We have just arranged it in one platform for educational purpose only. In each content, the hyperlink to the primary source is specified. All trademarks belong to their rightful owners, all materials to their authors. If you are the owner of the content and do not want us to publish your materials on our website, please contact us by email – [email protected]. The content will be deleted within 24 hours.
AIpoweredgadget updateGloballymaproofssustainabletech newstech update
Share