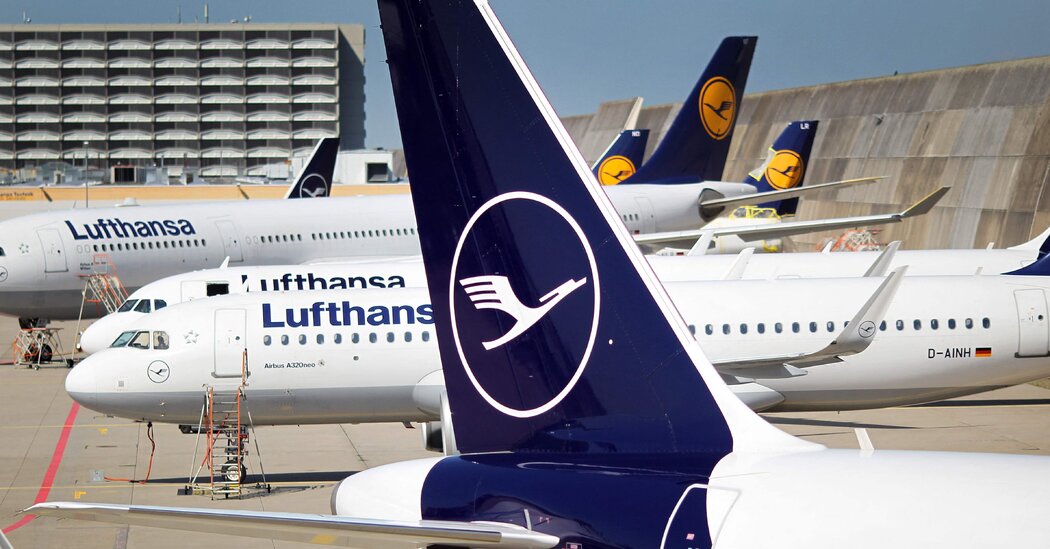 Airlines are at odds with the European Union over rules that require them to use their takeoff and landing slots at airports even when they don’t have enough passengers to justify flights. Airlines are being forced to fly thousands of nearly empty planes — sometimes called “ghost flights” — as travel plummets because of Omicron infections.

In recent weeks, several European carriers, including Lufthansa and Brussels Airlines, have said they need to cancel thousands of fights because they are not booked enough to be profitable. But they are being squeezed by E.U. rules that require them to use their valuable airport slots or risk losing them, potentially to rival carriers.

The rules, which normally require airlines to use at least 80 percent of their allocated slots at airports, were waived in early 2020 as the coronavirus hit the continent. But since then, the bloc has begun reinstating them, and last month the European Commission set the threshold to 50 percent for the winter travel season.

“Now the threshold for maintaining slots is raised again, and this means that if we cancel these 3,000 flights, we would lose our slots at multiple airports,” Maaike Andries, a spokeswoman for Brussels Airlines, said Thursday. “This is something that any airline must avoid of course.”

Pre-assigned takeoff and landing slots are common at Europe’s crowded airports, and are used to allocate space and prevent chaos among different airlines.

In the United States, only three airports maintain slots — Kennedy and La Guardia in New York and Ronald Reagan National in Washington — and the Federal Aviation Administration waived them early on in the pandemic and most recently extended them through March this year.

In announcing its decision to set the restriction at 50 percent capacity on Dec. 15, Adina Valean, the E.U. commissioner for transport, acknowledged concerns about the Omicron variant of the coronavirus, but said the move was aimed at helping airlines return to capacity by the summer.

But as more people canceled trips over the holidays amid the surge in the virus, airlines were left with little choice but to fly near-empty planes or risk losing valuable airport slots.

Carsten Spohr, chief executive of the Lufthansa Group, said his company had to cancel 33,000 flights, roughly 10 percent of those scheduled for the winter season. Other flights took off but were nowhere near fully booked. Besides Lufthansa, the company owns Eurowings and Austrian, Brussels and Swiss airlines.

“We have to carry out 18,000 additional, unnecessary flights just to secure our starting and landing rights,” Mr. Spohr told the Frankfurter Allgemeine Sonntagszeitung weekly newspaper two weeks ago.

“This is damaging for the climate,” he said, “and is exactly the opposite of what the European Commission hopes to achieve” in its effort to cut greenhouse gas emissions.

Georges Gilkinet, the Belgian minister for transportation, said on Wednesday that he had sent a letter to the European Commission asking for a further loosening of the regulation, which he called “economic, ecologic and socially nonsense.”

“I asked the Commission to review these unsuitable rules in times of Covid,” Mr. Gilkinet said on Twitter.

This week, the commission said it was standing by its decision to leave slot use at 50 percent through the winter season, in the interest of balancing the needs of airport operators, passengers and airlines.

That position was supported by a group representing airports.

“The pandemic has hit us all hard. Balancing commercial viability alongside the need to retain essential connectivity and protect against anticompetitive consequences is a delicate task,” said Olivier Jankovec, director of Airports Council International Europe. “We believe that the European Commission has got this right.”

Denial of responsibility! TechiLive.in is an automatic aggregator around the global media. All the content are available free on Internet. We have just arranged it in one platform for educational purpose only. In each content, the hyperlink to the primary source is specified. All trademarks belong to their rightful owners, all materials to their authors. If you are the owner of the content and do not want us to publish your materials on our website, please contact us by email – [email protected]. The content will be deleted within 24 hours.
airlinesAirportbusiness newsBusiness updateeasenews updateOmicronpush
Share