Notice: amp_is_available was called incorrectly. `amp_is_available()` (or `amp_is_request()`, formerly `is_amp_endpoint()`) was called too early and so it will not work properly. WordPress is currently doing the `pre_get_posts` hook. Calling this function before the `wp` action means it will not have access to `WP_Query` and the queried object to determine if it is an AMP response, thus neither the `amp_skip_post()` filter nor the AMP enabled toggle will be considered. It appears the theme with slug `publisher` is responsible; please contact the author. Please see Debugging in WordPress for more information. (This message was added in version 2.0.0.) in /home/runcloud/webapps/techilive/wp-includes/functions.php on line 5313
 'Ajeeb Daastaans' movie review: Good and bad co-exist in this morally ambiguous anthology - TechiLive.in 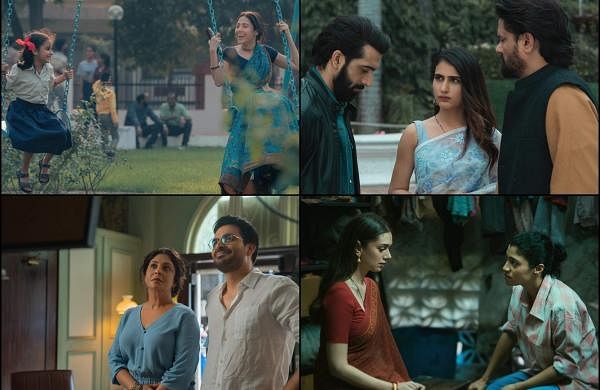 Karan Johar’s segment in the 2013 anthology, Bombay Talkies, ends with the song, ‘Ajeeb Daastan Hai Ye’, as a bewildered Dev (Randeep Hooda), who has just come out as a homosexual to his wife, sits, doubtful about his future. The song befits the fogginess of his situation, and with Karan Johar producing Ajeeb Daastaans, a four-part anthology, you can see where the idea might have stemmed from. Translating to ‘Weird Tales’, Ajeeb Daastaans has atypicality in its stories, although the degree varies from film to film. The common modus operandi seems to be a subversion of our expectations at the end, even if the effectiveness of this strategy wavers.

First in the order is Majnu, directed by Shashank Khaitan. From the title to dialogues to the hinterland setting, Majnu is all that we associate with a typical Bollywood film. Despite being the most formulaic of the four, this film has an air of tenderness that saves it from predictability, even if it isn’t enough. Babloo bhaiyya (Jaideep Ahalwat), a local bigshot, is forced into marriage with a young Lipakshi (Fathima Sana Shaik), the daughter of an affluent politician. Expectedly, their relationship is a sinking ship… in a sense, like the film. When Babloo employs a budding college-graduate Raj (Armaan Ralhan), the son of his driver, this causes his wife to develop feelings for him, and things take the route of Saheb Biwi Aur Gangster. There isn’t much plot here, but Jaideep Ahalwat, who humanises the roughneck, Babloo, keeps the film afloat.

The director’s intention with this film, oscillates between addressing bigotry among men and portraying longing for a companion. On his wedding night, Babloo states that he would not be able to love her as he has always loved someone else, but yet, expects her to remain loyal. The exchange about prejudice between the newlyweds right at the beginning establishes the film’s theme and what follows feels purely functional. The twist ending is a cynical indictment of the male-dominated world the film is set in. The woman is a mere toy.

Incidentally, the second film, by Raj Mehta, is called Khilauna, and toys with the idea of a human’s existence being as trivial as a plaything in the broader scheme of things. The premise is of electricity getting disconnected at the home of Meenal (Nushrratt Bharuccha), a domestic worker living with her sister Binny (Inayat Verma). What ensues are her attempts to get it back. There are a couple of great ideas in it, but for lack of a coherent screenplay, the potential doesn’t really get realised.

The topic of class politics is intriguing, and this extends to a privileged character like Vinod Agarwal (Maneesh Verma) getting addressed with his full name, while the underprivileged ones like Meenal and Binny are not. At one point, Vinod despises Sushil (Abhishek Banerjee), an istri-wala, and thrashes him for no real reason. There’s a hint that Meenal is complex too, but since the screenplay places shock value over resolution, not much is made of this. The twist invokes the desired effect, but you still can’t shake off the feeling that the anthology’s fixation with weirdness brings this film down.

Neeraj Ghaywan’s Geeli Pucchi rectifies Khilauna’s missteps and is a near-perfect blend of caste and gender politics with a focus on humaneness. The film follows Bharti Mandal (Konkana Sen Sharma), an educated Dalit woman working in the assembly line of a factory, although she possesses the educational qualification deserving of a higher position. Her acquaintance, Dashrath, warns that she will never be allowed to sit alongside higher officials, on account of her caste. The factory’s manager is a man with a tilak and in his first scene, he is shown preparing for puja in a cabin dominated by shades of orange. Bharti and the other workers, meanwhile, wear dark blue. Neeraj utilises such colors to illustrate the difference between these two worlds separated by caste. When Bharti meets a naive Priya Sharma (Aditi Rao Hydari), the new recruit for the position the former yearned for, she introduces herself with a ‘higher’ second name, Banerjee. They may bond over gender, but Bharti’s sexuality causes some angst. It’s fascinating how Neeraj interweaves caste and gender-based discrimination through Bharti, whose fight is both literal and figurative. A strong woman, she breaks into tears only when she feels insulted by Priya, a person Bharti holds dear even if briefly. Geeli Pucchi stands out for how it refuses to speak in binaries, despite discerning the identities of the victim and the perpetrator. When a character’s victory comes at the price of another’s despair, it tries to portray the issue with understanding. That, I suppose, is the ajeeb part of this surprisingly uplifting film.

The fourth film, Ankahi by Kayoze Irani, is a heartfelt love story between Natasha (Shefali Shah), a middle-aged woman going through marital distress, and a deaf-and-mute photographer Kabir (Manav Kaul). Natasha’s daughter, Samaira (Sara Arjun), is losing her hearing and yet, Natasha’s husband, Rohan (Tota Roy Chowdhury), is a workaholic who shows no real interest in learning sign language to communicate with her. Kabir, however, provides her with solace as he communicates without words.

One beautiful sequence draws distinction and parallels between Natasha’s relationships. At one point, Kabir shows her a photograph of an elderly couple enjoying the rain, and this shot is later recreated in the film with Kabir and Natasha. It’s a sweet moment, but we sense that heartbreak is imminent. What’s ajeeb about this film is the characterisation of Natasha, who comes off as being indecisive, despite knowing the consequences of her final actions. There is moral ambiguity, but you can’t help feeling that
it’s used as an excuse to be inconclusive.

Barring one film, Geeli Pucchi, this is an anthology whose inherent weirdness largely fails to be comprehensively satisfying.

Loading...
Denial of responsibility! TechiLive.in is an automatic aggregator around the global media. All the content are available free on Internet. We have just arranged it in one platform for educational purpose only. In each content, the hyperlink to the primary source is specified. All trademarks belong to their rightful owners, all materials to their authors. If you are the owner of the content and do not want us to publish your materials on our website, please contact us by email – admin@techilive.in. The content will be deleted within 24 hours.
Ajeebajeeb daastaansAjeeb Daastaans movie reviewAjeeb Daastaans reviewambiguousanthologybadcoexist
0
Share

Filipino Louie Sangalang proving worth on ONE’s The Apprentice – BusinessWorld