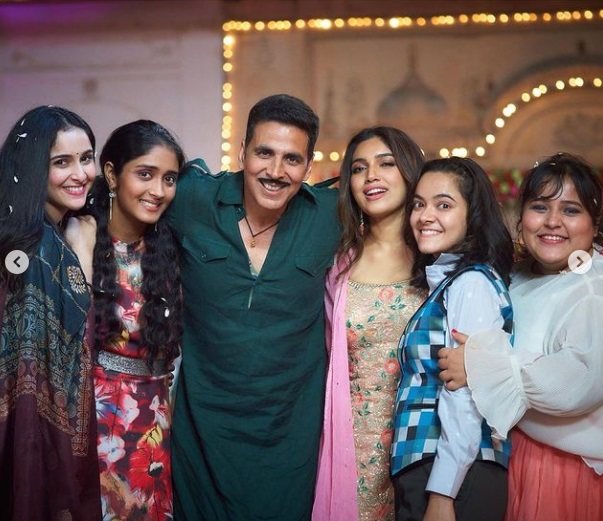 Akshay Kumar’s Raksha Bandhan is about the most special bond, on and off camera

Actor Akshay Kumar feels that there are many similarities between him and director Aanand L Rai.

On collaborating with Rai on ‘Raksha Bandhan’ after ‘Atrangi Re’, Akshay said, “If I were to describe Aanand sir, it would be a warm hug. That’s what being around him feels like. He’s someone who I feel is very honest and passionate about his craft. Hence, he won’t make you do something which isn’t being honest to the character of film.What makes us click is that I feel we are very similar as people, simple living, love for food, can’t sit idle, even if it’s just Ludo, we play in our free time.”

Akshay will be seen sharing screen space with Bhumi Pednekar in ‘Raksha Bandhan’, which is scheduled to release on August 11.

Directed by Rai and written by Himanshu Sharma and Kanika Dhillon, the film is produced by Colour Yellow Productions, Zee Studios, and Alka Hiranandani in association with Cape Of Good Films.

A few days ago, Akshay dropped some behind-the-lens pictures from ‘Raksha Bandhan’.

Taking to Instagram, the ‘Prithviraj’ actor shared a string of behind the scene pictures, to which he captioned, “A film celebrating the most special bond where there genuinely was a lot of bonding. Sharing a few special moments of this very special film, coming to a theatre near you in 1 month. #RakshaBandhan releasing on 11th August in cinemas.”

In the first picture, Akshay was seen hugging Rai and Bhumi with an eye-blink expression. In the second picture, the ‘Raanjhana’ director was seen giving a warm hug to Akshay, while he sits on a chair in a blue-checked shirt.

Apart from ‘Raksha Bandhan’, Akshay will also be seen in ‘Ram Setu’ with Jacqueline Fernandez and Nushrratt Bharuccha and ‘Selfie’ along with Emraan Hashmi.

Denial of responsibility! TechiLive.in is an automatic aggregator around the global media. All the content are available free on Internet. We have just arranged it in one platform for educational purpose only. In each content, the hyperlink to the primary source is specified. All trademarks belong to their rightful owners, all materials to their authors. If you are the owner of the content and do not want us to publish your materials on our website, please contact us by email – [email protected]. The content will be deleted within 24 hours.
AkshayAkshay KumarBandhanbondcameraentertainment newsEntertainment updateKumars
Share