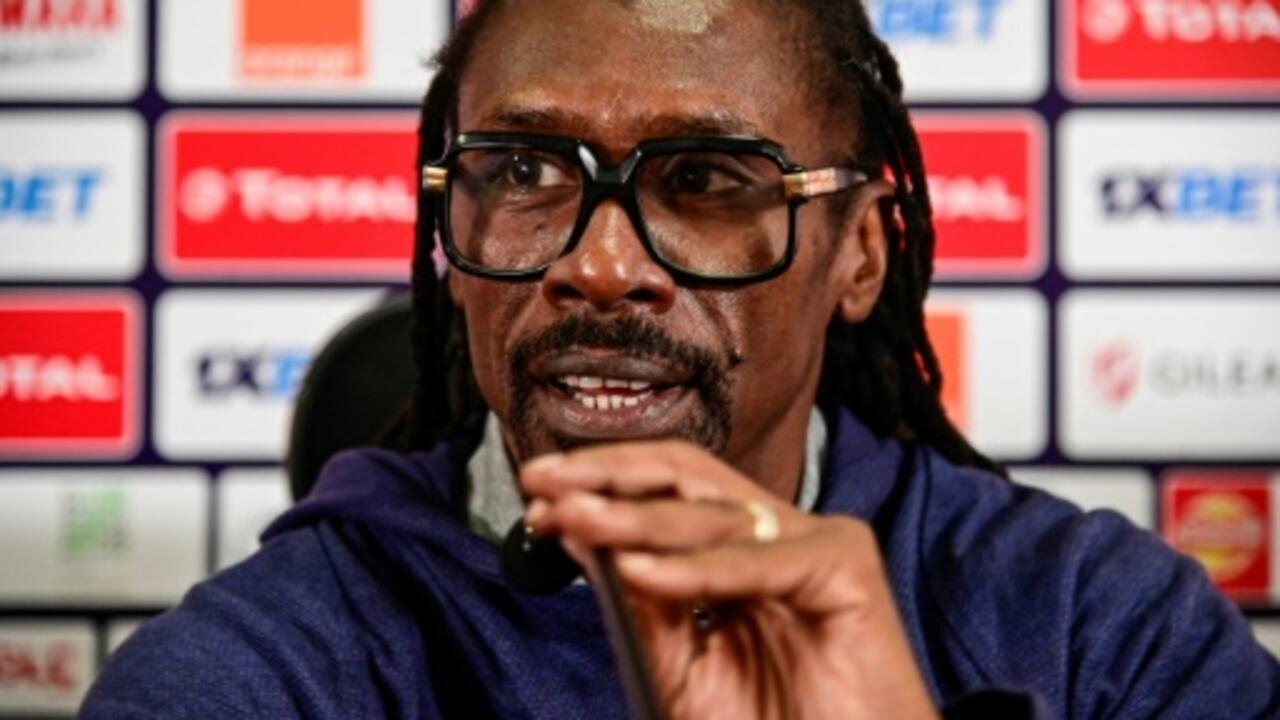 Perennially tipped to win the Africa Cup of Nations (CAN) before falling near the finish line in 2019, Senegal are hoping they will finally fulfil their promise at this year’s African football bonanza in Cameroon. Senegalese fans’ high hopes are piling pressure on the manager, former 2002 World Cup star Aliou Cissé. FRANCE 24 takes a look back at Cissé’s rich career as both player and coach.

Last time, Senegal looked like a solid bet to take home the CAN trophy – boasting a ferocious presence up front in the shape of Liverpool winger Sadio Mané – ahead of Napoli defensive rock Kalidou Koulibaly and mighty goalkeeper Édouard Mendy – Senegalese fans had every reason to believe they would win the Africa Cup of Nations in Egypt in 2019.

It wasn’t to be. A 1-0 Algeria victory in the final denied Senegal the trophy they had long coveted.

That wasn’t the first time Senegal had to content themselves with CAN silver medals, losing to Cameroon on penalties after a goalless draw in the 2002 final. Nevertheless, later that year they captured the footballing world’s attention with an astonishing run of form at the World Cup in Japan and South Korea. In an astounding upset, the Teranga Lions beat World Cup holders France – the mighty Bleus of Thierry Henry and Patrick Viera – to sail through the group stage. Senegal beat an impressive Sweden in extra time to enter the quarter-finals, where they crashed out in a 1-0 extra time defeat at Turkey’s hands.

Captaining Senegal as they humbled Les Bleus was none other than Aliou Cissé. Does he have what it takes to give the Teranga Lions another annus mirabilis, two decades on from that famous David and Goliath victory against France? The stakes are high – as many African football observers say he will likely lose his job if Senegal don’t win this year’s CAN.

Aliou Cissé was born in the town of Ziguinchor in southwestern Senegal on March 24, 1976. His family emigrated to France when he was 9, settling in the Paris suburb of Champigny-sur-Marne – the same place where his rival, Algeria manager Djamel Belmadi, was also growing up. As a child Cissé dreamed of playing for PSG, before launching his career as a teenager at Lille. After a year at Sedan in France’s eastern Ardennes region, Cissé got his dream move to the Parisian club.

“He was ambitious and hard-working,” Cissé’s former Sedan teammate Pierre Deblock told AFP. “We had to go for a cross-country run every Monday and a bunch of us older players had found a shortcut on the course. He’d just arrived, he was very young – and he told us off. It made me laugh; it showed you how much he wanted to succeed.”

It was this combination of drive and authority that made Cissé the perfect candidate for capitain of the Senegalese national team. Then Senegal manager Bruno Metsu chose Cissé as their on-pitch leader for the 2022 World Cup because he “wasn’t a flamboyant player but one of those dutiful, hardworking players who perform unglamorous but necessary tasks on the pitch”, Salif Diallo, head of sport at the Senegalese Press Agency, told FRANCE 24.

Diallo likened Cissé’s playing style to that of Didier Deschamps – the France captain whom the iconic Eric Cantona dismissed as a mere “water carrier”. Deschamps lifted the 1998 World Cup before managing Les Bleus as they seized the 2018 World Cup.

Cissé’s club career never quite lived up to that moment of glory as Senegal’s 2002 World Cup captain. He notched up 43 caps for PSG from 1998 to 2002, as their fortunes ebbed away following their mid-90s George Weah and David Ginola heyday. After unremarkable spells at Birmingham City and Portsmouth in the Premier League, Cissé returned to Sedan in 2006, before ending his playing career at Ligue 2’s Nîmes three years later.

Soon Cissé was working for his management badges. He quickly got a big break, becoming assistant to Senegal Olympic team manager Karim Séga Diouf. Cissé then rose to the position of Senegal youth manager, coaching the country’s fledglings in the 2013 Francophonie Games.

Cissé then took the top job in 2015, replacing Frenchman Alain Giresse as Taranga Lions manager at a low point for Senegal, after they crashed out in the group stage at that year’s CAN.

“He was Senegal fans’s choice,” Diallo noted. “We wanted Giresse to go after CAN-2015 and we wanted someone local to replace him,” he continued.

“Senegal has becoming a machine under Cissé,” Diallo added. “Maybe our playing style sometimes leaves a little to be desired – but the important thing is Senegal keep winning.”

The 4-2-3-1 formation Cissé set up has been key to Senegal’s success, allowing their top stars Mané, Mendy and Koulibaly to play to their strengths – with PSG’s Idrissa Gueye linking them up as the midfield linchpin.

“Cissé is like an elder brother to his players,” Diallo said, observing that Cissé does a particularly good job of guarding his players from the glare of media attention.

Senegal have gone from strength to strength under Cissé. The Teranga Lions departed CAN-2017 at the quarter-finals – but that was against that year’s unstoppable juggernaut Cameroon, who went on to capture the trophy.

Then at CAN-2019, Senegal’s record was marred only by their first and last matches, both defeats against their Algerian nemesis.

Cissé got Senegal to an Africa Cup of Nations final but Senegal fans want more. Not only do they demand victory, they’re also looking for a more aesthetically pleasing style of play – especially after a series of gritty 1-0 victories marked their CAN-2019.

“The fans want Senegal to play a beautiful game,” Diallo said. “They put the ball in the air too much; people say that’s the only way to win in Africa – but Belmadi’s Algeria show that you can win games with aesthetically satisfying football.”

The raw statistics speak well for Cissé: 40 wins, 14 draws and 8 losses in 62 matches. What’s more, Senegal have climbed up the FIFA rankings during his tenure, becoming the highest-ranked African side at 20th place.

But Senegal fans are apprehensive as they head into CAN-21: “We’re seen as one of the favourites thanks to past performances and the quality of our players; but everyone struggles to envisage victory,” Diallo put it. “Cissé is under great pressure. A lot of the supporters don’t want to cut him slack. The squad is full of players for big European clubs. The government and the football federation are supporting the team strongly; it’s never enjoyed such stability. So people wouldn’t forgive Cissé if it’s anything other than taking the trophy or at least getting into the final again.”

This article was translated from the original in French.

Denial of responsibility! TechiLive.in is an automatic aggregator around the global media. All the content are available free on Internet. We have just arranged it in one platform for educational purpose only. In each content, the hyperlink to the primary source is specified. All trademarks belong to their rightful owners, all materials to their authors. If you are the owner of the content and do not want us to publish your materials on our website, please contact us by email – [email protected]. The content will be deleted within 24 hours.
Africa Cup of NationsAliouCisséCupfootballglorygreathero
Share