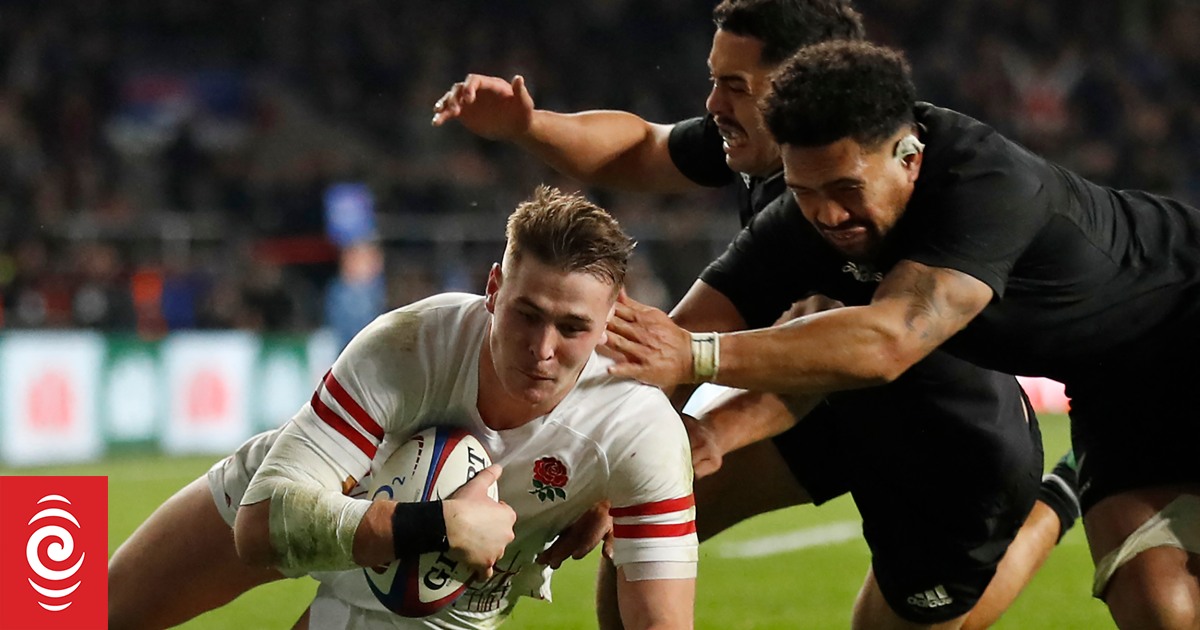 For a while there, it looked as though the All Blacks well and truly were back. Then, every issue that has dogged this team in 2022 came back to bite them as theydrew 25-all with England.

There are a ton of questions to be asked about this test, but one thing is for sure: if you like the sound of whistles then Twickenham was the place to be.

French referee Mathieu Raynal did his best to pretend it was a netball court, blowing 28 penalties in a test that looked for all money was going to end in a comfortable All Black victory. However, there really can’t be any complaints about any of them from a New Zealand perspective, this was a test that was well and truly bombed and should definitely be treated like a loss.

The All Blacks then tried to cross kick their way to success, taking advantage of the height disparity between Caleb Clarke and Jack Nowell. It worked for a while, but it became a waste of ball as they sailed out of Clarke’s reach and England got wise to it. The standard of defence in the All Black 22 was again impressive, after they held out Scotland three times a few inches away from their line last weekend.

Look back at how the game unfolded with RNZ’s blog

Really the All Blacks’ biggest enemies in the first half were themselves. Jordie Barrett’s reckless charge into a ruck saw a Rieko Ioane try snuffed out, then Ioane himself needlessly got ahead of a Clarke chip downfield that would have seen England in big trouble. Lineout wobbles saw three in a row turned over.

However, England seemed determined to shoot themselves in both feet in response. Penalty after penalty was given away after only a few phases and they looked out of attacking ideas very early on. By the end of the first half the All Black lead should have been more, but by then Raynal had taken all the impetus out of the game.

England threatened at the start of the second half, but it was the same story as the first. The All Blacks patiently absorbed the pressure, bent but didn’t break, then waited for Raynal to inevitably find something wrong with England’s breakdown play. Freddie Steward had been effectively taken out of the game by the All Blacks simply not kicking the ball to him, the 1.96m fullback having made a real name for himself by being incredibly effective on the return.

After Ioane’s stunning long range try and Beauden Barrett’s second Twickenham dropped goal, the stage was set for a trademark All Black day at the office. It would have been exactly what would have gone a long way to vindicating Ian Foster at the end of the most tumultuous season since 1998, but then everything fell to bits.

After being so effective last weekend, the bench added little despite being handed a pretty simple assignment. Even the much-vaunted Samisoni Taukei’aho did nothing except botch another lineout, in contrast England’s finishers did exactly what they were supposed to, with prop Will Stuart scoring twice and Steward another in a breathless last 10 minutes. Then, Marcus Smith somewhat inexplicably kicked the ball out, happy with a draw despite several of his team mates waving their arms in exasperation.

This wasn’t a particularly memorable game until the end, mainly due to the 28 penalties that never let it really flow. But that’s the most frustrating thing about it from an All Black point of view; historically in a test like this they’d simply go about their work and let the other side implode, which they did for the majority of the game.

Instead they dramatically soiled their pants, and not for the first time this season. They were up 21-3 in Japan, then ended up only winning by seven. A 14-0 lead turned into a 23-14 deficit against Scotland. Then, the most egregious, 31-13 in Melbourne against the Wallabies only to trail 37-34 and win in extremely lucky circumstances.

The last test of the year shaped up to answer a lot of questions about where the All Blacks are headed. For 70 minutes it did, but the complete lack of composure shown in the last 10 means we’re still wondering.

Denial of responsibility! TechiLive.in is an automatic aggregator around the global media. All the content are available free on Internet. We have just arranged it in one platform for educational purpose only. In each content, the hyperlink to the primary source is specified. All trademarks belong to their rightful owners, all materials to their authors. If you are the owner of the content and do not want us to publish your materials on our website, please contact us by email – [email protected]. The content will be deleted within 24 hours.
AudioBlacksBlownCurrent AffairsleavesmatchNewsnews update
Share

Here’s Why You Want To Stay Away From Eufy Security…

Cameroon vs Brazil LIVE Streaming: How to watch FIFA World…