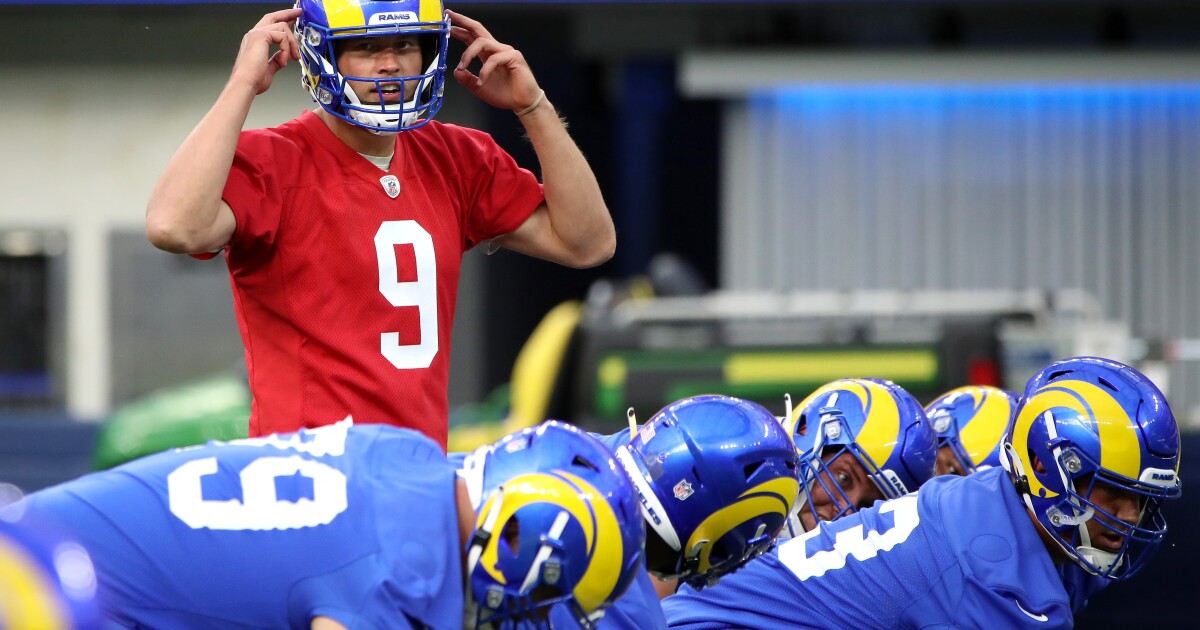 On Sunday, when Rams quarterback Matthew Stafford takes his first snap of the season, the 13th-year pro will be playing for a new team, in a new offense in a new stadium.

But he will be facing a familiar opponent.

Stafford has played against the Chicago Bears 20 times.

He led the Detroit Lions to 11 victories and suffered nine defeats against the Bears in NFC North games, passing for 32 touchdowns, with 23 interceptions.

“I know a bunch of the guys on their team,” Stafford told reporters. “I’m used to seeing the Bears a couple of times a year and I’m just going to be wearing a different uniform playing them this time.”

Stafford, 33, begins the season with enormous expectations from Rams fans.

General manager Les Snead and coach Sean McVay traded quarterback Jared Goff and two first-round draft picks to the Lions for a quarterback with valuable experience and arm talent but no playoff victories.

But Stafford is regarded as the piece that can put the Rams back in the Super Bowl, which will be played in February at SoFi Stadium.

Stafford had thumb surgery in March. As with all Rams starters, he did not play in preseason games. But he appeared comfortable in team workouts and in joint practices with the Las Vegas Raiders.

“I’m excited to just go play ball,” Stafford said this week. “I love doing this. A bunch of different changes for me this offseason too. Battled through a bunch of things, moved my family across the country.

“I want to go play some football and do it with a group of guys that I’ve, in a short period of time, grown to just absolutely love and respect.”

After last season’s NFC divisional-round playoff loss to the Green Bay Packers, Snead and McVay wasted no time getting rid of Goff. Two weeks after the Rams’ defeat, they traded for Stafford.

During the last seven months, Stafford commiserated and collaborated with McVay.

“I feel like I definitely needed all the time I can get,” Stafford said.

McVay indicated that Stafford was not shy about expressing himself.

“He’s got really strong opinions,” McVay said. “But it’s never, if he does have a disagreement, it’s never in a way that that makes you feel like, ‘All right, well, what the heck?’

“It’s always in such a disarming, good way of not necessarily having to agree to everything, but let’s be solution-oriented.”

Receiver Cooper Kupp said Stafford has taken advantage of the run-up to the season.

“He’s been here what seems like, you’ve gone through a ton of time together, but at the same time for this offense what he’s been able to pick up in this amount of time still is pretty incredible,” Kupp said.

In Detroit, Stafford would play in at least one preseason game. The hundreds of practice snaps that he has taken against the Rams defensive backfield has prepared him for the season, he said.

“Our guys are as good as anybody I’ve played against, practiced against, any of that,” he said. “So, that’s a great test for us making sure that we’re getting the ball out on time.”

Stafford did that plenty of times against the Bears. Last season, he led a touchdown drive in the final minutes to pull the Lions to within three points. The Lions then forced a turnover that led to another short touchdown for a 34-30 victory.

New Bears defensive coordinator Sean Desai told Chicago reporters that Stafford can “change the game at a moment’s notice” and that he anticipates McVay will add “new wrinkles” to the Rams’ offense with Stafford.

Bears outside linebacker Robert Quinn, an 11th-year pro, played the last of his seven seasons with the Rams in 2017, McVay’s first season. Quinn anticipates a potent combination that the Bears must neutralize.

“We all know Stafford has a great arm — definitely can make all the throws,” Quinn told Chicago reporters. “And him joining McVay over in L.A., I’m sure they’ve got a whole bunch of crazy schemes drawn up.”

The collaboration with Stafford is only beginning, McVay said.

“We’re looking forward to it,” he said, “and it’s really just the start, which is the good thing.”

Loading...
Denial of responsibility! TechiLive.in is an automatic aggregator around the global media. All the content are available free on Internet. We have just arranged it in one platform for educational purpose only. In each content, the hyperlink to the primary source is specified. All trademarks belong to their rightful owners, all materials to their authors. If you are the owner of the content and do not want us to publish your materials on our website, please contact us by email – [email protected]. The content will be deleted within 24 hours.
bearEyesMatthewnews updatePrepareRamssports newssports update
Share