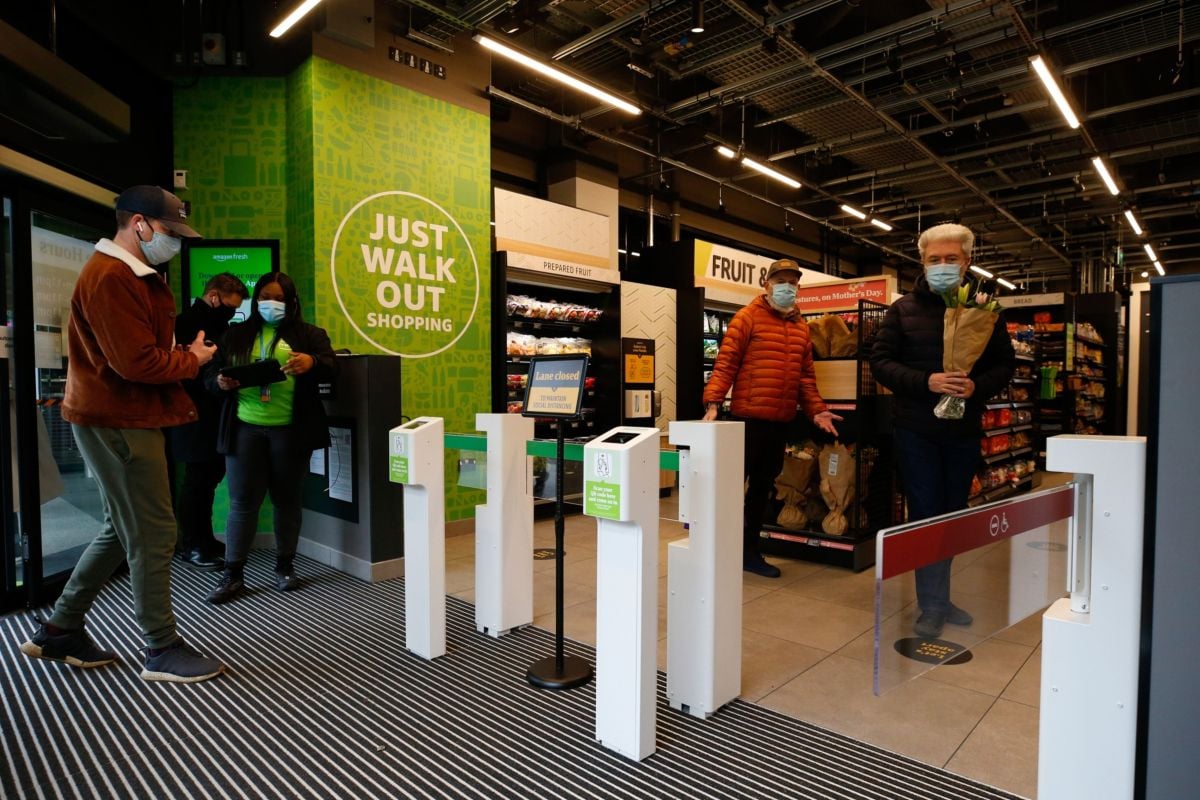 Amazon Opens Checkout-Free UK Grocery Store – Its First Outside US

Amazon on Thursday launched its first “just walk out shopping” outlet outside the United States, as the online retail giant steps up its competition with traditional supermarkets and other retailers.

Customers at Amazon Fresh in Ealing Broadway shopping centre in west London queued outside the black and green storefront under social distancing measures to be first to use the convenience store which has no checkouts.

The outlet, according to Amazon, is the “first convenience grocery store to offer just walk out shopping in the UK” and its “first physical shop and grocery store outside of the US”.

To use the new outlet, customers have to download an app and then scan a QR code before an electronic gate swings open and allows them to browse a range of Amazon-brand products.

On its opening day, a team of assistants, dressed in vibrant green jackets – the same colour as the grocery shop’s colourful branding – were on hand to explain how the system worked.

Once they have bagged their items, customers don’t have to show a card or let anyone know, they simply walk out.

“It was really strange, it felt like I was a criminal, because I was just taking things and putting them straight in my bag,” 71-year-old Ealing resident Philippa Dolphin told AFP.

‘You just walk right out’
“But apparently there are cameras watching me. And then you just walk out! It didn’t seem right but I was assured it was okay!” she added.

Amazon has said the store, which is similar to 20 Amazon Go outlets in the United States, uses “deep learning” algorithms – technology which allows machines to learn by themselves – with cameras and sensors to tell what customers have picked up.

“It automatically knows what you’ve got in your basket and when you leave the shop it charges you and bills you automatically into the account you have set up,” said Erica Ely, a 57-year-old local resident, holding her purchases on the street outside the shop.

Benjamin Rogers, 31, a sales manager who lives in the area, stopped in to buy ingredients for a cake and said the speed of shopping at the Amazon store made it appealing.

“I think the major advantage is the fact that sometimes when you go to the supermarket you can do your shopping and then it can be a five-, 10-, 15-minute wait to pay for your goods at the end” he said.

“This is just a simple way to cut through and walk out and finish your job.”

Matt Birch, a former Sainsbury’s executive who now leads Amazon Fresh Stores UK, said the brand which is also used for online groceries in the UK has looked to make the experience “as convenient as possible”.

‘Reversing the trend’
“We recognise that UK customers want to shop in a convenient way so we really think they will appreciate being able to walk in and walk out with the shopping they need,” he added.

Amazon, which was already growing in Britain before the pandemic and competing with a struggling retail sector, has seen its position strengthen since the outbreak and months of closure for shops deemed non-essential.

Shopper Mark Lloyd said it was “interesting” that Amazon was moving from online into “bricks and mortar retail business”.

“It is kind of reversing the trend for e-commerce and digital shelves, so it is quite unusual in that respect,” the 58-year-old creative director said.

Despite the ease of her shopping experience, Dolphin said she was somewhat troubled what about the arrival of the Amazon shop would mean in the long term.

“I am a bit worried that it is going to put other businesses that I use out of business. So yes, I am a little bit concerned because they are such a giant,” she said.

Scientists to Look for Signs of Life in Newly Discovered Exoplanet

Facebook Asked by Russia to Provide Explanation on Blocked Accounts