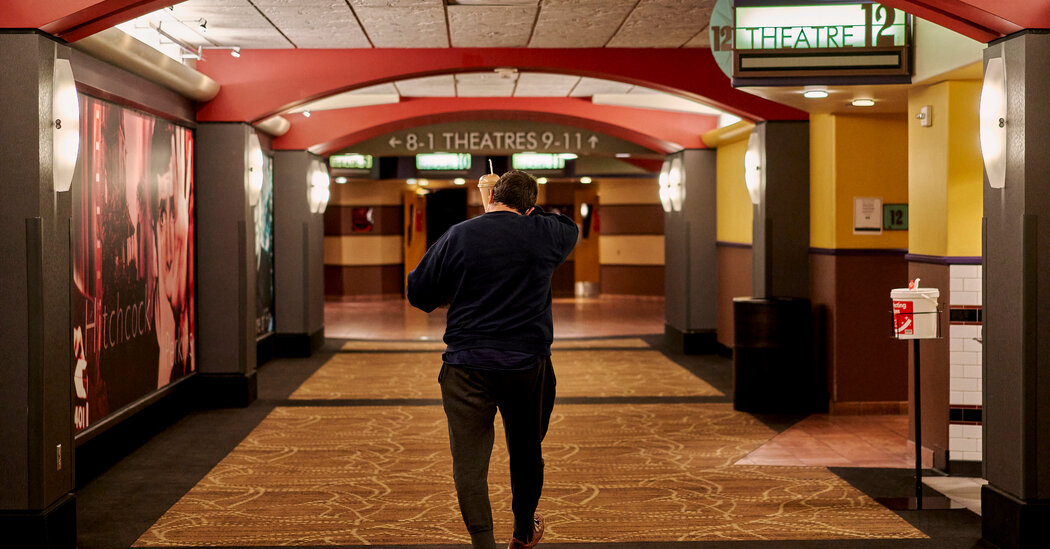 AMC’s share sale slams the brakes on an overnight surge.

AMC’s gravity-defying run in the stock exchange came to halt in premarket trading on Thursday after the movie-theater chain said in a regulatory filing that it planned to sell an additional 11.55 million shares. Its share price sunk more about 4 percent, after being up about 20 percent earlier in the morning.

On Wednesday AMC’s share price nearly doubled, to $62.55, after the company said it would offer free popcorn and other perks to the more than three million retail investors that have recently bought shares in the company.

AMC has been embraced by individual small investors seeking to raise the price of certain unloved stocks. These shareholders now own 80 percent of the company, AMC said. Other so-called meme stocks also tumbled in premarket trading, including Bed Bath & Beyond, Koss and GameStop.

U.S. stock futures fell as traders cautiously approached two reports on the labor market. Weekly data on initial claims for state jobless benefits will be published later on Thursday morning. The number is expected to decline again and is about half of what it was in early April.

On Friday, the Labor Department will publish its monthly jobs report. And last month, that report showed an unexpectedly small increase in hiring in April.

The S&P 500 is set to open half a percentage point lower, futures indicate.

Investors are also watching the Federal Reserve closely for signs that it will pull back its monetary stimulus, which has helped keep asset prices high. Patrick Harker, the president of the Federal Reserve Bank of Philadelphia, said on Wednesday that it “may be time to at least think about thinking about tapering” its large government bond-buying program.

On Wednesday, the Federal Reserve announced that it would sell its relatively small holdings of corporate bonds, which were bought last year to stabilize the bond market in the early months of the pandemic.

Most European stock indexes were down on Thursday. The FTSE 100 in Britain dropped 0.8 percent, falling more than other major European indexes. There is speculation that the final lifting of social-distancing restrictions in Britain, scheduled for June 21, might be delayed because of the spread of the coronavirus variant first discovered in India.

Oil prices slipped. Futures for West Texas Intermediate, the U.S. crude benchmark, fell 0.2 percent to $68.70 a barrel. The previous day, the price was at its highest since late 2018.

Discontent at Facebook has surged over its recent handling of international affairs, according to interviews with more than half a dozen current and former employees.

For weeks, they said, employees have complained about the company’s decisions to take down posts from prominent Palestinian activists and messages critical of the Indian government’s handling of the pandemic, Sheera Frenkel and Mike Isaac report for The New York Times.

The workers have grilled top executives at meetings about the situations and, in one case, formed a group to internally report Palestinian content that they believe Facebook had wrongly removed. This week, more than 200 employees also signed an open letter calling for a third-party audit of Facebook’s treatment of Arab and Muslim posts, according to a person who saw the letter.

The actions are another sign of internal unrest at Facebook as employee criticism broadens beyond domestic issues. For the past few years, workers largely challenged Mark Zuckerberg, Facebook’s chief executive, on his handling of inflammatory posts from former President Donald J. Trump. But since Mr. Trump left office in January, attention has shifted to Facebook’s global policies and what employees said was the company’s acquiescence to governments so that it could continue profiting in those countries.

“There’s a feeling among people at Facebook that this is a systematic approach, one which favors strong government leaders over the principles of doing what is right and correct,” said Ashraf Zeitoon, Facebook’s former head of policy for the Middle East and North Africa region, who left in 2017.

Retail, hospitality and fast-food workers across the country interviewed by The New York Times expressed alarm that their employers had used new guidance from the Centers for Disease Control and Prevention to make masks optional for vaccinated customers.

Some said they had been vaccinated but worried they could still get sick or infect family members who were not or could not get vaccinated. Others said they had yet to be vaccinated, Noam Scheiber reports for The Times.

Matt Kennon, a room-service server at the Beau Rivage Resort and Casino in Biloxi, Miss., said that before the C.D.C. relaxed its recommendations, the resort’s policy was that all guests must wear masks in common areas unless they were eating, drinking or smoking, and that it was strictly enforced.

“There were several security checkpoints around the place where we’d have someone from security let them know, ‘Please put on a mask,’” said Mr. Kennon, a shop steward with his union, UNITE HERE. “There were stations with disposable masks for guests to wear in case they didn’t have one.”

Mr. Kennon said the policy remained in place even after the governor lifted a statewide mask mandate in early March, but changed after the C.D.C. announcement. Vaccinated guests are allowed to walk around without masks, but there is no way to verify vaccination status and fewer than half of guests are wearing them, according to Mr. Kennon.

Denial of responsibility! TechiLive.in is an automatic aggregator around the global media. All the content are available free on Internet. We have just arranged it in one platform for educational purpose only. In each content, the hyperlink to the primary source is specified. All trademarks belong to their rightful owners, all materials to their authors. If you are the owner of the content and do not want us to publish your materials on our website, please contact us by email – [email protected]. The content will be deleted within 24 hours.
AMCsbrakesEducation newsEducation updatenews updateovernightsaleShare
0
Share