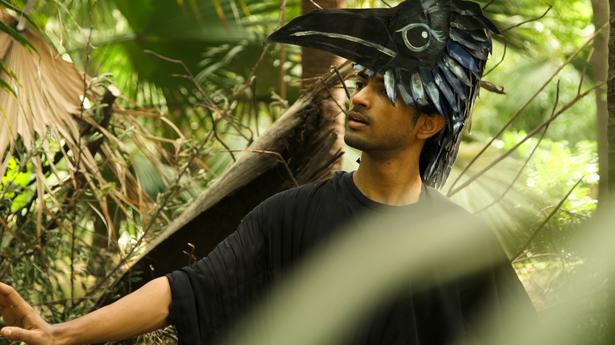 An artiste shares her experience of a theatre production, Tara, Compass Crow, which hopes to create environmental awareness in young audiences

Can theatre speak to the younger generation about such weighty issues as species extinction and climate change?

Can theatre speak to the younger generation about such weighty issues as species extinction and climate change?

As a child growing up in the Potala Palace (Lhasa, Tibet), the Dalai Lama would often run up to the roof and train his telescope upon herds of yak being taken to market. On seeing them, he would race to a shrine room, sequester some of the offerings, instruct a palace worker to buy the entire herd and liberate them.

It is this powerful spirit of direct action that motivates us to rehearse a piece of new dance-drama for young people to the beat of live tabla, before the sun becomes scorching hot in Lodhi Gardens.  Imbibing Delhi’s natural beauty, we feel the grass beneath our feet and awaken to a chorus of birds.

No one is too young to find their creative wings and fly.
| Photo Credit: Dikshit Sharma & Athan Zimik

As scriptwriter and mask-maker for the production of  Tara, Compass Crow — a story set in the time of the Indus Valley with a present day environmental message  — I was blessed with a balcony in Manali on which to spend more than a month sewing ( ahimsa) silk feathers onto larger-than-life head-dresses for the dancers to wear. While I worked, all around me swooped crows, Himalayan jays, turtle doves. There was time to contemplate the big questions: can theatre speak to the younger generation about such weighty issues as species extinction and climate change? Is an interactive performance the best forum in which to inspire actual change for good? As producers, we decided that our programmes should be printed on khadi paper, our fabric for costumes hand-woven, our set biodegradable: but would a young audience pick up on this attention to environmental detail? And if so, would it help them to recognise the urgent need for change?

Vanshika Ahlawat, a Class X student, feels optimistic that the audience of eco-theatre take away a strong message: “If we go on the way we are now, our earth will be destroyed by the time we grow up. But awareness is spreading. I feel mixed emotions: scared, but also fortunate to be in India where there is still so much greenery and wildlife,” she says. Benjamin Jacob, choreographer, director and lead dancer for  Tara, expresses the need to fully immerse the audience from the moment they enter the auditorium. “Even though it’s an indoor space, I want them to feel that theatre is a place where they can connect with nature. During the 60-minute performance, I want them to feel gratitude, as if nature were talking to them. It’s high time this message is heard especially when 200 species of plant, insect, bird and mammals become extinct every 24 hours,” he says.

As 150 school children were dancing with human birds in the aisles of a small theatre in Delhi, 22 wildfires raged across the U.K., that foggy, dull isle in the North Sea. Heatwaves, violent storms and epic floods now happen somewhere on the planet each day. Bill McGuire, in his book  Hothouse Earth, warns that ‘a child born in 2020 will face a far more hostile world than its grandparents did.’ Our children are already aware of this and are voicing it.

Yashita Dhalia, a Class VIII student, confesses she is “honestly pretty terrified about our future.” However, she does feel “a sliver of hope.” Tara is amongst friends on the subcontinental stage of India, where many initiatives explore environmental awareness through performance storytelling.  Tierra, a five-day playshop, conducted earlier in the year in the Begur forest of Kerala, focused on climate change, nature conservation and human-animal relationship. Flash mob-style protest dances by young farmers are happening in Goa’s Mollem forest, where pipelines, high-speed rail tracks and multi-lane highways threaten to tear through the pristine home of many endangered species.

Back in Delhi, our Sundays are spent with groups of young artists making bird masks and devising dances, a process we hope will better connect us all to our natural surroundings, even in the heart of the capital. Watching our students engage and seeing their joy of imitating the movement of wild things keep us believing that the transformative, healing power of nature can inspire positive change.

No one is too young to find their creative wings and fly. I am taken back to my third year at Cambridge when eco-theatre was in its infancy and only a few brave directors had enough wit to foresee the planetary madness ahead. Director Rosanna Lowe, after a year in Guatemala, devised an acclaimed piece after watching the interactions of waste collector children, who subsisted on a city rubbish heap. In her play, characters communicated through bird cries and song alone. Twenty years later,  BBC Four’s eco-thriller podcast ‘Power Out’, scripted by award-winning writer and activist Sarah Woods, begins with the premise, ‘The world is dying. It’s time to take action.’ McGuire believes it will take some kind of miracle to prevent us all from crashing through the 1.5°C climate change guardrail. “This is a call to arms,” he says. “So if you feel the need to glue yourself to a motorway or blockade an oil refinery, do it.”

Our response to this call to arms is to create nature-inspired theatre, prompted by the energy of earth beneath our bare feet, our connection to the spirit that moves us to stand on a stage, or in a forest or on the street, and sing our hearts out, dancing and leaping into the unknown.

Tara, Compass Crow  will travel to Bengaluru in October, to Haryana in November and to New Delhi again in December.

Denial of responsibility! TechiLive.in is an automatic aggregator around the global media. All the content are available free on Internet. We have just arranged it in one platform for educational purpose only. In each content, the hyperlink to the primary source is specified. All trademarks belong to their rightful owners, all materials to their authors. If you are the owner of the content and do not want us to publish your materials on our website, please contact us by email – [email protected]. The content will be deleted within 24 hours.
artisteAudiencesAwarenessBill McGuireChildrenClimate changecompassCompass Crow
Share