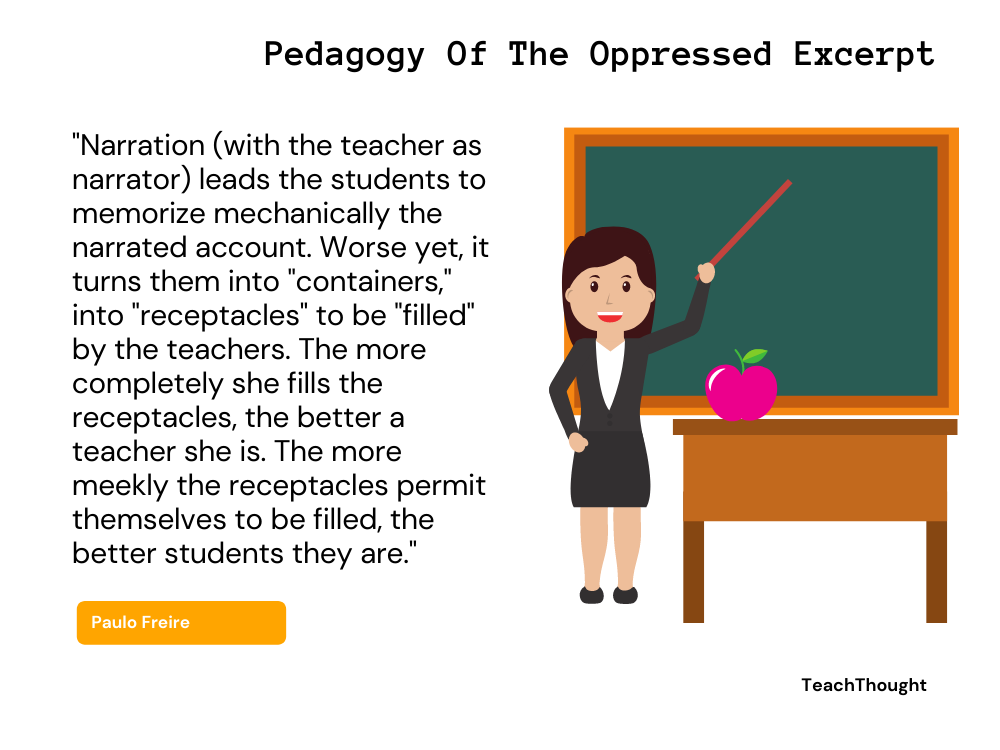 Paulo Freire’s education philosophy described education as comprehensive–that is, an active process of intellectual, sociological, and political assimilation ‘performed upon’ the student. And in response, Freire shifted the focus from institutions to people and the potential effects of those institutions and their practices.

This further suggested that education should be become dialogic–an ongoing interaction between systems of learning and the students participating in those systems. This also illuminated education indeed as a system of parts and viewed the entire process in comprehensive terms of cause and effect.

No pedagogy which is truly liberating can remain distant from the oppressed by treating them as unfortunates and by presenting for their emulation models from among the oppressors. The oppressed must be their own example in the struggle for their redemption.

Likewise, oppressors must be willing to rethink their way of life and to examine their own role in oppression if true liberation is to occur: “Those who authentically commit themselves to the people must re-examine themselves constantly”.

Freire believed education and living were inseparable–and thus, inherently political. This makes education also inherently ‘destructive,’ but what it ‘destroyed’ is a matter of culture, social norms, and perspective. could not be divorced from politics; the act of teaching and learning are considered political acts in and of themselves. The implied politics of any knowledge distribution, much less one based on a nearly scripted curriculum of academic standards, is a political act. That is, it is underpinned by assumptions that have a political function even if their ‘purpose’ seems (merely) academic on the surface.

Freire also saw the role of the learner as central, and saw knowing what one doesn’t know as a kind of knowledge. (I’ve written about this concept many times–in Learning Through Humility, for example.)

Below is an excerpt from one of Freire’s seminal works in ‘education,’ Pedagogy Of The Oppressed.

“A careful analysis of the teacher-student relationship at any level, inside or outside the school, reveals its fundamentally narrative character. This relationship involves a narrating Subject (the teacher) and patient listening objects (the students). The contents, whether values or empirical dimensions of reality tend in the process of being narrated to become lifeless and petrified. Education is suffering from narration sickness.

The teacher talks about reality as if it were motionless, static, compartmentalized, and predictable. Or else he expounds on a topic completely alien to the existential experience of the students. His task is to “fill” the students with the contents of his narration — contents that are detached from reality, disconnected from the totality that engendered them and could give them significance. Words are emptied of their concreteness and become a hollow, alienated, and alienating verbosity.

The outstanding characteristic of this narrative education, then, is the sonority of words, not their transforming power. “Four times four is sixteen; the capital of Para is Belem.” The student records, memorizes, and repeats these phrases without perceiving what four times four really means, or realizing the true significance of “capital” in the affirmation “the capital of Para is Belem,” that is, what Belem means for Para and what Para means for Brazil.

Education thus becomes an act of depositing, in which the students are the depositories and the teacher is the depositor. Instead of communicating, the teacher issues communiques and makes deposits which the students patiently receive, memorize, and repeat. This is the “banking’ concept of education, in which the scope of action allowed to the students extends only as far as receiving, filing, and storing the deposits. They do, it is true, have the opportunity to become collectors or cataloguers of the things they store. But in the last analysis, it is the people themselves who are filed away through the lack of creativity, transformation, and knowledge in this (at best) misguided system. For apart from inquiry, apart from the praxis, individuals cannot be truly human. Knowledge emerges only through invention and re-invention, through the restless, impatient continuing, hopeful inquiry human beings pursue in the world, with the world, and with each other.

In the banking concept of education, knowledge is a gift bestowed by those who consider themselves knowledgeable upon those whom they consider to know nothing. Projecting an absolute ignorance onto others, a characteristic of the ideology of oppression, negates education and knowledge as processes of inquiry. The teacher presents himself to his students as their necessary opposite; by considering their ignorance absolute, he justifies his own existence. The students, alienated like the slave in the Hegelian dialectic, accept their ignorance as justifying the teacher’s existence — but unlike the slave, they never discover that they educate the teacher.

The raison d’etre of libertarian education, on the other hand, lies in its drive towards reconciliation. Education must begin with the solution of the teacher-student contradiction, by reconciling the poles of the contradiction so that both are simultaneously teachers and students.

This solution is not (nor can it be) found in the banking concept. On the contrary, banking education maintains and even stimulates the contradiction through the following attitudes and practices, which mirror oppressive society as a whole:

It is not surprising that the banking concept of education regards men as adaptable, manageable beings. The more students work at storing the deposits entrusted to them, the less they develop the critical consciousness which would result from their intervention in the world as transformers of that world. The more completely they accept the passive role imposed on them, the more they tend simply to adapt to the world as it is and to the fragmented view of reality deposited in them.

The capability of banking education to minimize or annul the student’s creative power and to stimulate their credulity serves the interests of the oppressors, who care neither to have the world revealed nor to see it transformed. The oppressors use their “humanitarianism” to preserve a profitable situation. Thus they react almost instinctively against any experiment in education which stimulates the critical faculties and is not content with a partial view of reality always seeks out the ties which link one point to another and one problem to another.

Indeed, the interests of the oppressors lie in “changing the consciousness of the oppressed, not the situation which oppresses them,” (1) for the more the oppressed can be led to adapt to that situation, the more easily they can be dominated. To achieve this the oppressors use the banking concept of education in conjunction with a paternalistic social action apparatus, within which the oppressed receive the euphemistic title of “welfare recipients.” They are treated as individual cases, as marginal persons who deviate from the general configuration of a “good, organized and just” society. The oppressed are regarded as the pathology of the healthy society which must therefore adjust these “incompetent and lazy” folk to its own patterns by changing their mentality. These marginals need to be “integrated,” “incorporated” into the healthy society that they have “forsaken.”

The truth is, however, that the oppressed are not “marginals,” are not living “outside” society. They have always been “inside” the structure which made them “beings for others.” The solution is not to ‘integrate” them into the structure of oppression, but to transform that structure so that they can become “beings for themselves.” Such transformation, of course, would undermine the oppressors’ purposes; hence their utilization of the banking concept of education to avoid the threat of student conscientizacao.

The banking approach to adult education, for example, will never propose to students that they critically consider reality. It will deal instead with such vital questions as whether Roger gave green grass to the goat, and insist upon the importance of learning that, on the contrary, Roger gave green grass to the rabbit. The “humanism” of the banking approach masks the effort to turn women and men into automatons — the very negation of their ontological vocation to be more fully human.

Those who use the banking approach, knowingly or unknowingly (for there are innumerable well-intentioned bank-clerk teachers who do not realize that they are serving only to dehumanize), fail to perceive that the deposits themselves contain contradictions about reality. But sooner or later, these contradictions may lead formerly passive students to turn against their domestication and the attempt to domesticate reality. They may discover through existential experience that their present way of life is irreconcilable with their vocation to become fully human. They may perceive through their relations with reality that reality is really a process, undergoing constant transformation. If men and women are searchers and their ontological vocation is humanization, sooner or later they may perceive the contradiction in which banking education seeks to maintain them, and then engage themselves in the struggle for their liberation.

But the humanist revolutionary educator cannot wait for this possibility to materialize. From the outset, her efforts must coincide with those of the students to engage in critical thinking and the quest for mutual humanization. His efforts must be imbued with a profound trust in people and their creative power. To achieve this, they must be partners of the students in their relations with them…

…Problem-posing education does not and cannot serve the interests of the oppressor. No oppressive order could permit the oppressed to begin to question: Why? While only a revolutionary society can carry out this education in systematic terms, the revolutionary leaders need not take full power before they can employ the method. In the revolutionary process, the leaders cannot utilize the banking method as an interim measure, justified on grounds of expediency, with intention of later behaving in a genuinely revolutionary fashion. They must be revolutionary — that is to say, dialogical — from the outset.”

Denial of responsibility! TechiLive.in is an automatic aggregator around the global media. All the content are available free on Internet. We have just arranged it in one platform for educational purpose only. In each content, the hyperlink to the primary source is specified. All trademarks belong to their rightful owners, all materials to their authors. If you are the owner of the content and do not want us to publish your materials on our website, please contact us by email – [email protected]. The content will be deleted within 24 hours.
Education newsEducation updateExcerptFreirenews updateOppressedPauloPedagogy
Share