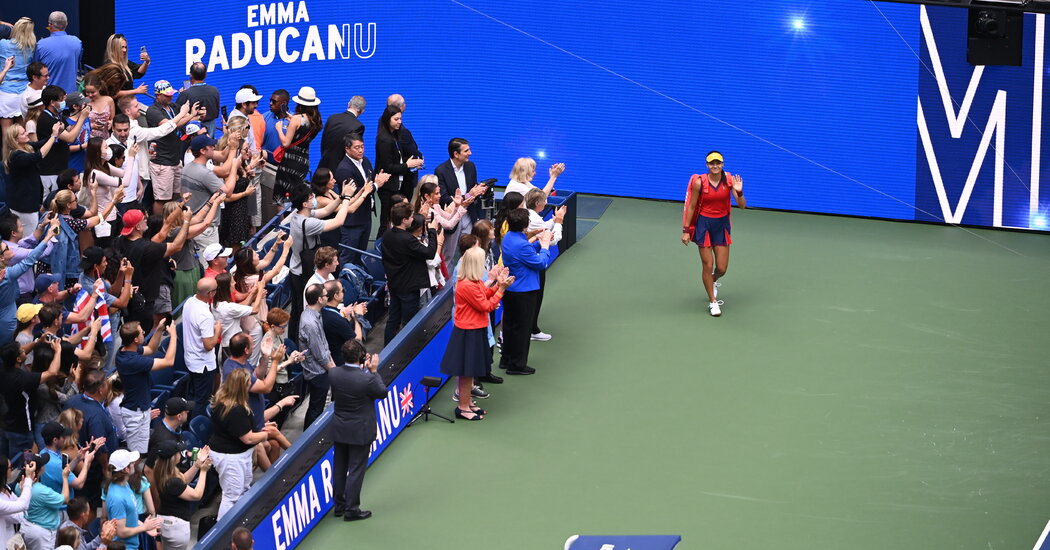 An international fan club forms for Fernandez and Raducanu.

In Toronto, The Globe and Mail notes of Leylah Fernandez: “The youngster from Laval, Que., has turned the WTA Tour on its ear in Flushing Meadows.”

The two unseeded teenagers, Raducanu 18, and Fernandez, 19, have become international sensations, especially back in their home countries. Raducanu was born in Toronto to a Romanian father and Chinese mother and moved to England when she was 2.

Fernandez was born in Montreal, about two months before Raducanu, to an Ecuadorean father and a mother from Toronto, whose parents immigrated to Canada from the Philippines.

Fernandez and Raducanu are meeting in the U.S. Open women’s final — the first all-teen final since 1999 — and celebrities have taken note.

“The Giant Slayer continues!!” Magic Johnson, the Hall of Fame basketball star, tweeted after Fernandez beat the second-seeded Aryna Sabalenka in a semifinal. Before that, Johnson told followers that if they hadn’t yet seen Fernandez play, they were “truly missing out.” Cassidy Hubbarth, an ESPN anchor of Filipino descent, tweeted out a series of Philippine flag emojis.

Prime Minister Boris Johnson of Britain weighed in, calling Raducanu’s semifinal win over Maria Sakkari “brilliant,” on his Twitter account and adding, “The whole country will be cheering you on in the final.”

Justin Trudeau, the prime minister of Canada, who is in the middle of an election campaign, also said his country was rooting for Fernandez.

The Canadian Maple Syrup cartel had to be thrilled, too. After a win, Fernandez joked on court that the sweet Canadian export was the key to the success of her and her compatriots, including Felix Auger-Aliassime, who reached a men’s semifinal; Bianca Andreescu, who won the tournament in 2019; and the rising Denis Shapovalov. Not bad for a country with a population about 10 percent as large as the United States.

Aleksandra Wozniak, one of the first Canadian women to break through and become a tennis sensation, tweeted, “Canada, you have a new star!”

Naturally, the Duke and Duchess of Cambridge sent regards to Raducanu. Kate Middleton is a well-known tennis fan and a regular in the Royal Box at Wimbledon each year.

Because of their connections to the Philippines and China, the young finalists are receiving support from many fans in Asia.

Jorge Fernandez, Leylah’s father and coach, said he reached out to one of the Filipino community organizations in Montreal that helped his family when Leylah was young. He said that, with everything going on, people there were surprised to hear from him. But he felt it was important.

“I’m glad that they’re touching the Asian community,” he said of both players. “I think that’s a huge opportunity in the women’s game just to be able to expand and have a new style.”

Denial of responsibility! TechiLive.in is an automatic aggregator around the global media. All the content are available free on Internet. We have just arranged it in one platform for educational purpose only. In each content, the hyperlink to the primary source is specified. All trademarks belong to their rightful owners, all materials to their authors. If you are the owner of the content and do not want us to publish your materials on our website, please contact us by email – [email protected]. The content will be deleted within 24 hours.
Loading...
ClubfanFernandezformsInternationalnews updateRaducanusports news
Share

Ganesh Chaturthi 2021:Make These 5 Delicious Lunch Recipes In 30 Minutes To Mark The Festival

Fernandez’s ‘superstitious’ father, who is also her coach, plans to watch at home.