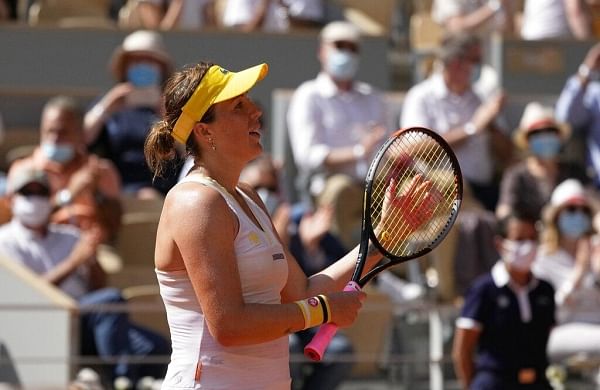 PARIS: Anastasia Pavlyuchenkova will play Barbora Krejcikova for the French Open title after the Russian reached her first Grand Slam final Thursday at a record 52nd attempt, while the Czech saved a match point in a dramatic win over Maria Sakkari.

Pavlyuchenkova defeated world number 85 Tamara Zidansek of Slovenia 7-5, 6-3, with the unseeded Krejcikova fighting back from the brink to outlast Sakkari 7-5, 4-6, 9-7 after three hours and 18 minutes.

Pavlyuchenkova, a quarter-finalist in Paris a decade ago, became the first woman to play more than 50 majors before making her first final, breaking the previous mark of 44 set by 2015 US Open runner-up Roberta Vinci.

“It’s been a long road. I had my own long special road. Everybody has different ways. I’m just happy I’m in the final,” said the 29-year-old Pavlyuchenkova, who made her Grand Slam debut at Wimbledon in 2007.

The 31st seed dropped serve in the opening game on a sun-drenched Court Philippe Chatrier but capitalised on a fourth break point against Zidansek to break back for 2-2.

Pavlyuchenkova, a former junior world number one and Roland Garros girls’ singles finalist in 2006, surged 5-3 ahead as Zidansek sprayed a forehand wide.

But the Slovenian immediately broke back, rewarded for her persistence and tireless defence.

Zidansek then carved herself two break points at 5-5 but Pavlyuchenkova managed to hold, and the Russian struck the following game to wrap up the first set as her opponent committed a costly double fault.

Pavlyuchenkova carried that momentum into the second set, breaking to lead 2-0. Zidansek responded to get back on serve but was again broken as the Russian swept into a 4-1 advantage.

Zidansek, twice two points from defeat in the first round here, continued to scrap hard and the nerves resurfaced for Pavlyuchenkova as two double faults allowed the Slovenian to claw her way back to 4-3.

But Pavlyuchenkova was not going to be denied, as another break left her serving for the match, with victory assured when Zidansek fired wide.

“I always wanted to play a match like this, a challenging match where we’re both playing so well. Even if I lost today, I’m very proud of myself. Fighting, in life, it’s the most important thing,” said Krejcikova.

Both players made a nervy start to their maiden Grand Slam semi-final, with 17th seed Sakkari the first to hold serve in the fourth game as she took a 3-1 lead.

But Krejcikova picked up the next four, pulling 5-3 ahead with a sublime lob that left her serving for the set.

The Czech was then broken to love as Sakkari rattled off eight points in a row to level at 5-5.

A routine hold from Krejcikova put the pressure back on Sakkari, who surrendered the set as her shot clipped the net and floated wide.

Sakkari, who took down last year’s runner-up Sofia Kenin and then reigning champion Iga Swiatek in the past two rounds, regrouped and raced 4-0 ahead in the second.

The Greek fended off a spirited comeback from Krejcikova to force a decider, Sakkari breaking for a 2-1 edge and saving a break point in the next game to consolidate as the finish line crept ever closer.

Sakkari had match point at 5-3 but the resilient Krejcikova stayed alive with a sweeping backhand volley, and then broke back before moving 6-5 in front.

Krejcikova watched three match points of her own pass by at 7-6, Sakkari saving a pair with a crunching backhand winner and an ace.

Krejcikova held again with relative comfort and brought up another match point on Sakkari’s serve. A forehand from the Greek was called long, but the chair umpire dramatically overruled — even as TV replays showed the ball to be out.

Rather than dwell on her apparent hard luck, Krejcikova brought up a fifth match point, converting after three hours and 18 minutes with a backhand winner down the line.

Rafael Nadal and Novak Djokovic on Friday face off for the 58th time in a storied rivalry, which began with their first ever meeting in the 2006 quarter-finals at Roland Garros.

World number one Djokovic has the overall edge at 29-28, but Nadal enjoys a 7-1 record in their French Open encounters and is 19-7 on clay against the Serb.

Djokovic’s last win over the Spanish star on a clay court was in Rome five years ago.

One of those defeats, however, was at the hands of Djokovic in 2015.

Loading...
Denial of responsibility! TechiLive.in is an automatic aggregator around the global media. All the content are available free on Internet. We have just arranged it in one platform for educational purpose only. In each content, the hyperlink to the primary source is specified. All trademarks belong to their rightful owners, all materials to their authors. If you are the owner of the content and do not want us to publish your materials on our website, please contact us by email – [email protected]. The content will be deleted within 24 hours.
AnastasiaBarborabattleFrenchKrejcikovanews updateOpenPavlyuchenkova
0
Share