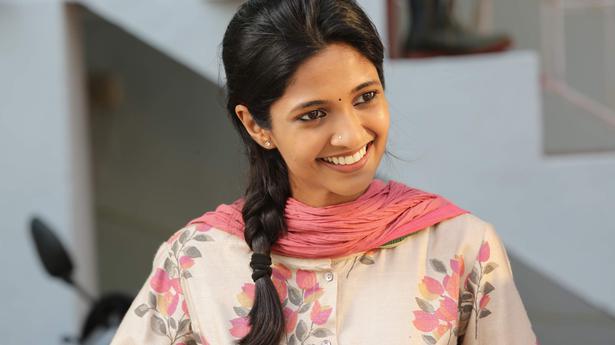 A remake can be tricky business, for comparisons are inevitable. But this Keerthi Pandian-starrer gets a lot right

Anbirkiniyal (Keerthi Pandian) is the chirpiest person on her street. Every morning, she’s buzzing about; chatting merrily with workers, pulling the leg of a grandmother who lives nearby and chiding her father for secretly taking a smoke.

She works in a mall, and is chirpy there as well: every time a customer walks up for an order, Anbirkiniyal greets them with a smile.

But the daughter-father duo aren’t just basking in happiness. They have financial commitments, and to ensure she takes matters in her own hands, Anbiriniyal plans a future abroad. But one day, when she’s at the mall, something happens, and life turns topsy turvy.

This what-happens-in-one-night kind of tale has a lot of nail-biting moments to offer, and Anbirikiniyal takes a leaf out of its original (Malayalam film Helen, available on Amazon Prime) to showcase that. It not only retains most of the chills that the original offered, but adds a dash of drama too.

Casting is one of the biggest highlights of the film; Keerthy and Arun Pandian manage to showcase a loveable father-daughter on the big screen (Arun is Keerthy’s father for real). This not only works in the cutesy sequences, but also in the few emotional scenes in the first half.

Once Anbirikiniyal gets entangled in an ordeal in the second half, things get edgier. Survivor dramas can be difficult to sit through, because of the sole focus on one person – but this Tamil offering, much like its Malayalam original, cuts cleverly to the events surrounding the ordeal to keep interest levels high.

If Anna Ben showcased desperation in a difficult situation aplenty in Helen, Keerthi shows grit and gives her best. While it is heartening to see Arun Pandian play father, a little more effort in the emotional sequences and better lip-sync would have elevated the film.

Director Gokul adds a little extra drama in Anbirkiniyal, providing some kind of relief from the chills that we experience. There’s some messaging in the end, but even that seems to gel well. However, adding a caste angle to the proceedings sticks out like a sore thumb.

A remake can go wrong on many counts, but Anbirkiniyal gets a lot of things right to make for some fulfilling entertainment on the big screen.

Denial of responsibility! TechiLive.in is an automatic aggregator around the global media. All the content are available free on Internet. We have just arranged it in one platform for educational purpose only. In each content, the hyperlink to the primary source is specified. All trademarks belong to their rightful owners, all materials to their authors. If you are the owner of the content and do not want us to publish your materials on our website, please contact us by email – [email protected]. The content will be deleted within 24 hours.
Loading...
AnbirkiniyalAnbirkiniyal movie reviewArun PandianchillingEfficiententertainment newsEntertainment updateHelen
0
Share

Japan stocks lower at close of trade; Nikkei 225 down 0.99% By Investing.com

Twitter has to comply with new IT rules for digital media, says HC