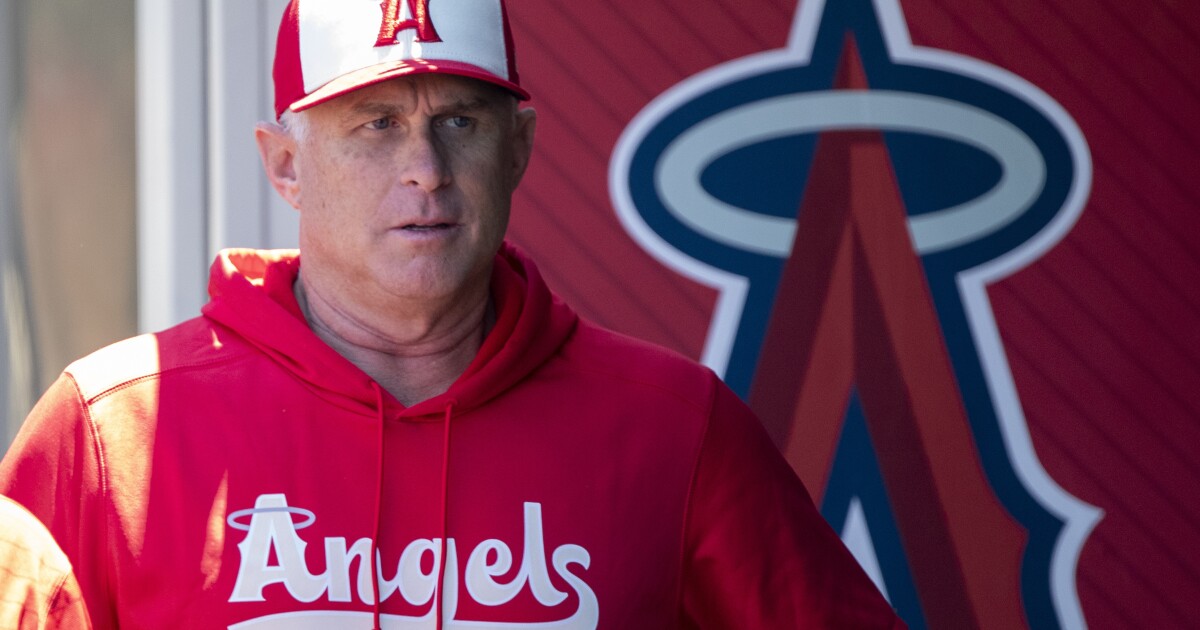 Phil Nevin has switched around some of his coaches.

The Angels’ interim manager, with the blessing of general manager Perry Minasian, has changed up his infielders, first base and third base coaches — moves he said he had been thinking about the last few days.

Mike Gallego will become the regular third base coach. Nevin had been in that role before he was named interim manager last week when Joe Maddon was fired.

“I look at this as really three promotions for each coach,” Nevin said before Tuesday night’s Freeway Series opener against the Dodgers at Dodger Stadium. “[Mike] has also been doing our defensive alignment on the infield. I know as a third base coach, you got a lot going on.”

Benji Gil, a former big league infielder who had been serving as first base coach, will take over for Gallego and oversee the infielders.

“[Benji], I think, sees the game through an incredible lens, especially being a middle infielder,” Nevin said. “He’s played all over the infield. That job will be his and his alone to work with our analysts and positioning our infielders. It lets him focus solely on our infielders.”

And Damon Mayshore, who will still continue his duties as the outfielders and baserunning coach, will become the first base coach.

“He does a lot of work with the runners on stealing bases, working on pitchers’ times and tendencies,” Nevin said. “He’s now in direct contact with runners on first.”

Nevin clarified that he had no problems with Gil in his previous role, saying that the moves were ways to capitalize on each coach’s specialties.

Right fielder Taylor Ward (right hamstring strain) was reinstated from the injured list ahead of Tuesday’s game and reinserted into the No. 1 spot in the batting order.

The decision to have him lead off was a no-brainer for Nevin, who pointed to his .443 on-base percentage.

“When you look up and see the best on-base percentage in the league, you really like that guy leading off for you,” Nevin said. “When we look back to April, all the success we had a lot of stems from what Taylor did for us.

“I just think it’s a lift for the room,” he continued. “We’re back to full strength.”

Nevin said Ward “put in a lot of work while he’s been out” but knew picking up where he left off — before he went on the IL on June 5 — would be difficult.

Ward flew out to right field in his first at-bat Tuesday, but his return brought back a familiar sight for Angels fans, seeing Ward, Anthony Rendon, Mike Trout and Shohei Ohtani all back.

The last time fans saw Ward, he went one for three against the Philadelphia Phillies on June 3. He was one of baseball’s top hitters before going on the IL. He had 40 hits in 30 games (108 at-bats from April 16 to May 20) with six doubles, two triples, nine homers, 23 RBIs and 23 walks.

Maddon moved Ward to the leadoff spot April 25 in the middle of the Angels’ hot streak.

Ohtani is scheduled to be the starting pitcher in the Angels’ series opener at Seattle on Thursday, Nevin said.

Patrick Sandoval likely will pitch one of the games during Saturday’s doubleheader against the Mariners.

The Angels were still deciding on their other starter for Saturday as well as their starters on Friday and Sunday.

Angels reliever Austin Warren, who was hit in the nose by a ball before the team’s game May 3 against the Red Sox in Boston, returned from the IL and was back in the clubhouse Sunday.

Before Tuesday’s game, he opened up about that freak pregame practice incident. He explained its aftermath. He said he went straight to the trainer’s room and had someone get his phone so he could tell his family that he had gotten hit pretty badly but would be OK. His concern at the time was his family seeing the news on Twitter and freaking out.

“My girl was actually in town, and she met me at the hospital,” Warren said. “Yes, my mom did fly out that night and stayed with me in my hotel room.”

Warren was left with two black eyes, the first time he had ever suffered one.

Warren had surgery May 10 to repair his broken nose.

“Freak accident,” Warren said. “Stuff happens, and I’m just glad to be back.”

Denial of responsibility! TechiLive.in is an automatic aggregator around the global media. All the content are available free on Internet. We have just arranged it in one platform for educational purpose only. In each content, the hyperlink to the primary source is specified. All trademarks belong to their rightful owners, all materials to their authors. If you are the owner of the content and do not want us to publish your materials on our website, please contact us by email – [email protected]. The content will be deleted within 24 hours.
AngelsCoachesInterimmanagermovesNevinnews updatePhil
Share

apple: Explained: How Apple may kill CAPTCHAs with this new feature – Times of India

Smartphone can Detect Narrowed Arteries in Your Neck

BTS’ Jungkook wants fans to think this about him when…