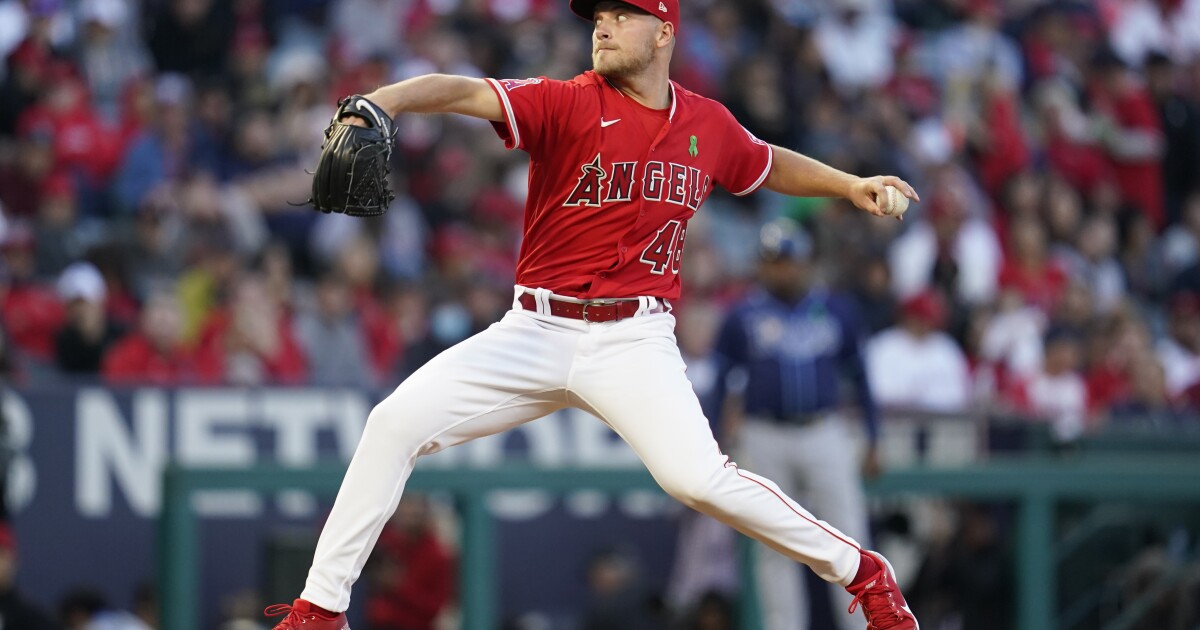 Little did Joe Maddon know how prophetic he would sound when the Angels manager was asked before Tuesday night’s game to assess the progress of pitcher Reid Detmers, a 22-year-old left-hander who was occasionally effective but mostly erratic in his first five starts.

“It’s better, but it’s not as good as it can be,” Maddon said. “He’s got great command, good stuff, great makeup, but I don’t think he’s actually executed a game plan with any kind of consistency. So, he’s gonna get better. But to this point, we haven’t seen the best side of him yet.”

They did Tuesday night.

Detmers, a first-round pick out of Louisville in 2020, threw the 12th no-hitter in franchise history during a 12-0 victory over the Tampa Bay Rays before an announced crowd of 39,313 in Angel Stadium, striking out only two and walking one during an efficient if not overpowering 108-pitch effort.

He took the mound for the ninth with his pitch count at 94. Vidal Brujan popped out to catcher Chad Wallach for the first out and Kevin Kiermaier grounded out to second.

Yandy Diaz followed with a grounder to shortstop Andrew Velazquez, who scooped the ball up and fire accurately to first for the final out.

The Angels poured out of their dugout and mobbed Detmers, the pile generating so much momentum it pushed itself from the mound into foul territory down the first-base line.

The 10th induvial no-hitter in franchise history was the first no-hitter since the emotional combined effort of Taylor Cole and Felix Peña on July 12, 2019, against the Seattle Mariners, the team’s first home game after the death of pitcher Tyler Skaggs.

The last individual no-hitter was by Jered Weaver against the Minnesota Twins on May 2, 2012, in Angel Stadium.

Detmers had a perfect game with two strikeouts through five innings. He had only three, three-ball counts in the first five innings. The closest the Rays came to a hit was in the fourth, when Angels left fielder Brandon Marsh raced in to make a catch of a Harold Ramirez flare to end the inning.

Detmers closed the fifth with a strikeout of Mike Zunino on a 72-mph curve, but his full-count curve to Taylor Walls to open the sixth was up and away for ball four, ending his perfect-game bid.

Angels third baseman Anthony Rendon made a leaping catch of a Brujan line drive for the first out. First baseman Jared Walsh made a back-hand grab of Kevin Kiermaier’s grounder down the line, stepped on the bag and fired to second to complete an inning-ending doble play.

With one out in the seventh, Brett Phillips hit a hard grounder to the right of Walsh, who bobbled the ball and was unable to pick up in time to throw to Detmers at the bag. Official scorer Mel Franks did not hesitate in ruling the play an error.

Ramirez followed with a 383-foot drive that Marsh caught at the wall in left field, and Randy Arozarena flied out to end the inning.

Reid breezed through a one-two-three eighth, getting Brandon Lowe to fly to left, Zunino to fly to right and Walls to pop out to second.

The game got so far out of hand in the eighth that Rendon, batting from the left side against position-player-turned-pitcher Brett Phillips, lined a two-run home run to right field to cap a four-run inning.

The Angels added three more runs in a five-hit third, with Walsh and Jack Mayfield hitting singles ahead of Wallach’s three-run homer to left that made it 8-0.

Trout added his second homer of the game and ninth of the season, a towering two-run shot to center field off Phillips, the right fielder turned pitcher, to make it 10-0 in the eighth. Shohei Ohtani doubled, and Rendon homered to right to make it 12-0.

Denial of responsibility! TechiLive.in is an automatic aggregator around the global media. All the content are available free on Internet. We have just arranged it in one platform for educational purpose only. In each content, the hyperlink to the primary source is specified. All trademarks belong to their rightful owners, all materials to their authors. If you are the owner of the content and do not want us to publish your materials on our website, please contact us by email – [email protected]. The content will be deleted within 24 hours.
AngelsDetmersnews updateNoHitterRaysReidsports newssports update
Share

Canada to ban Chinese telecoms Huawei and ZTE from 5G…