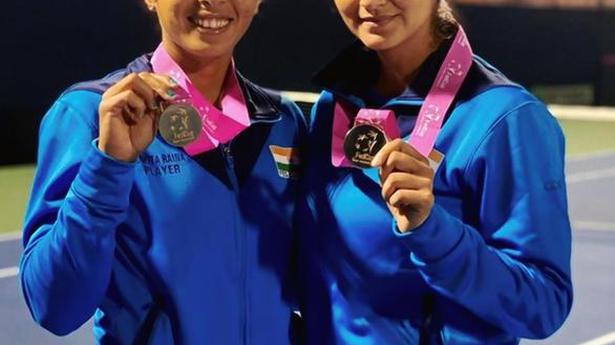 Ankita to partner Sania at the Olympics

It was the best kept secret in Indian women’s tennis for some time.

The country’s top-ranked woman player, Ankita Raina, went on Instagram to announce that she would be competing in the Tokyo Olympics doubles event with six-time Grand Slam champion Sania Mirza.

“I will do my best to make India proud!” Ankita stated.

Former World No. 1 Sania will make the Olympics entry on the basis of her injury-protected ranking of No. 9.

As per the rule, Sania can make the doubles draw with a partner ranked in the top-300.

The 28-year-old Ankita is 183 in singles and 95 in doubles. The ranking list on June 14 will be applicable for making the cut.

There is also a strong possibility of Ankita making the singles entry list in Tokyo as the Asian Games bronze medallist.

The gold and silver medallists from China, Wang Qiang and Shuai Zhang, ranked 39 and 46 at the moment, could get direct entry when 56 players are taken into the Olympics singles event on the basis of their world ranking.

Before the Billie Jean King Cup World Group play-off in Latvia recently, Sania had invited Ankita to Dubai for a week-long training.

The two were soon inducted into the Target Olympic Podium Scheme (TOPS) by Sports Authority of India (SAI) so as to provide them funding for Olympic preparation.

Thanking her employer Oil and Natural Gas Corporation (ONGC), Ankita wrote, “the effort and hard work put in all these years have been fruitful with your invaluable support and encouragement”.

Denial of responsibility! TechiLive.in is an automatic aggregator around the global media. All the content are available free on Internet. We have just arranged it in one platform for educational purpose only. In each content, the hyperlink to the primary source is specified. All trademarks belong to their rightful owners, all materials to their authors. If you are the owner of the content and do not want us to publish your materials on our website, please contact us by email – [email protected]. The content will be deleted within 24 hours.
Loading...
AnkitaAnkita Rainalive tennis scoresnews updateOlympicsPartnersaniaSania Mirza
0
Share