Notice: amp_is_available was called incorrectly. `amp_is_available()` (or `amp_is_request()`, formerly `is_amp_endpoint()`) was called too early and so it will not work properly. WordPress is currently doing the `pre_get_posts` hook. Calling this function before the `wp` action means it will not have access to `WP_Query` and the queried object to determine if it is an AMP response, thus neither the `amp_skip_post()` filter nor the AMP enabled toggle will be considered. It appears the theme with slug `publisher` is responsible; please contact the author. Please see Debugging in WordPress for more information. (This message was added in version 2.0.0.) in /home/runcloud/webapps/techilive/wp-includes/functions.php on line 5313
 Anthony Davis went big, but Lakers came up short against Blazers - TechiLive.in 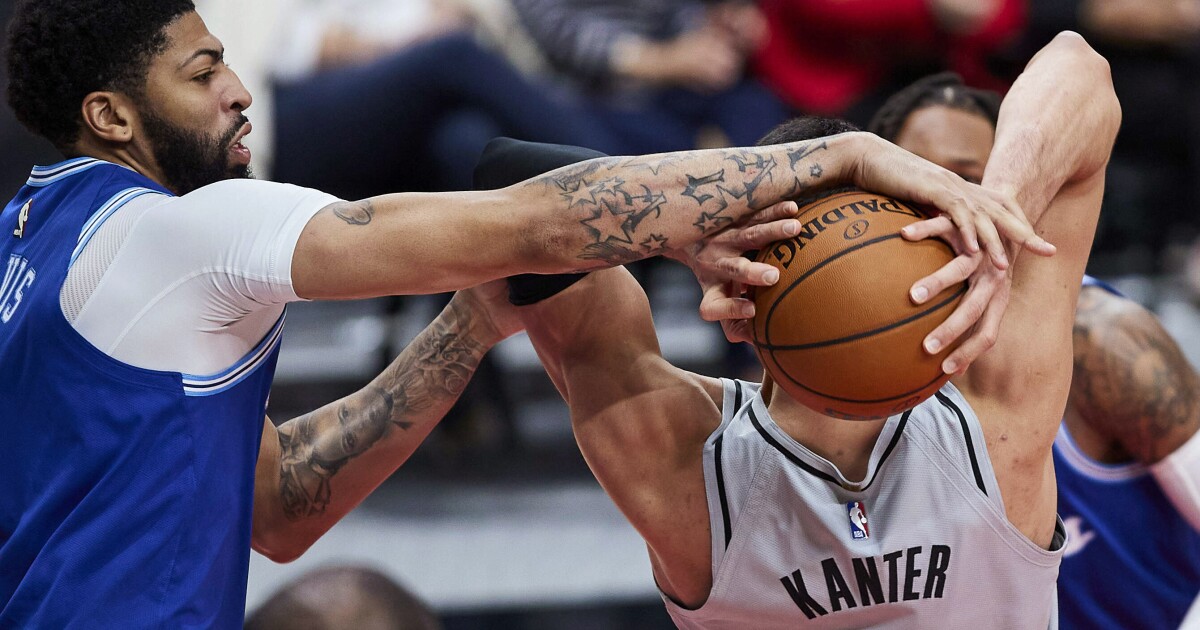 Anthony Davis was the first of four Lakers to address the media in a postgame videoconference Friday night, still in his uniform, his thoughts succinct on how several key plays helped determine his team’s fate.

He played his best all-around game since returning from a right calf strain and tendinosis in his right Achilles, and yet it wasn’t enough to rescue the Lakers from a hard-fought, 106-101 defeat to the Portland Trail Blazers that had major playoff implications for both teams.

Davis’ double-double of 36 points and 12 rebounds couldn’t prevent the Lakers from losing the season series, and playoff tiebreaker, to the Trail Blazers 2-1 and it left Los Angeles in seventh place in the Western Conference, one game behind sixth-place Portland.

He had played 39 minutes and 4 seconds. He had 10 points in the fourth quarter to give the Lakers some hope. He had five assists and one big-time block.

So, from a personal standpoint, it was a good night for Davis.

“I feel good. I feel good,” Davis said on Zoom. “Put me on the floor, I’m going to try to do as much as I can to help the team win. I feel like I’m getting my legs back under me. I’m getting a rhythm. So, I think the minutes might get back extended. And also, some of that too, I didn’t … I technically didn’t play last night. So, I had a little bit more juice.”

Highlights from the Lakers’ 106-101 road loss to the Portland Trail Blazers on Friday night.

One night after playing only nine minutes against the Clippers because of back spasms, it was evident in the fourth quarter that Davis could carry the Lakers.

They had fallen behind by 10 points late in the game, but Davis scored seven consecutive points for the Lakers, pulling them to within 100-97 on two free throws with 1:10 left.

Then Davis made a defensive stop by blocking a shot by Portland center Jusuf Nurkic.

After Kentavious Caldwell-Pope got the rebound, the Lakers eventually got the ball to Kyle Kuzma, who pulled up for a potential game-tying three-pointer that missed.

Kuzma had missed nine of his 10 shots before that attempt. His missed three with 42.5 seconds remaining left Kuzma zero for six from three-point range.

Still, the Lakers had a chance after Damian Lillard, who had a game-high 38 points, made two free throws when Alex Caruso scored to pull the Lakers to within 102-99 with 34.6 seconds left.

Ben McLemore then fouled CJ McCollum with 27.6 seconds left. McCollum made both free throws to seal the game.

By losing for the eighth time in their last 10 games, the Lakers could find themselves in the NBA’s play-in tournament.

The Lakers have five regular-season games remaining, one against playoff-bound Phoenix on Sunday and another Tuesday against a New York Knicks team that’s fourth in the Eastern Conference, both at Staples Center.

“Towards the end, it was just some mental mistakes that beat us,” Davis said. “Didn’t have to foul. … Maybe Kuz could have gotten a two [and we would be] down one. Or we’re down three, got the layup and then we’re down one. Especially because he was struggling. But then again, I mean, he’s a shooter and it was a tough play in between. A guy who shoots the [heck] out of the ball. He didn’t shoot it well tonight, a wide-open look, it’s a good shot.

“A layup is probably the right play, but we’re living with him shooting the ball. It’s just tough, man. It’s a tough loss for us. At least we were in it. We wanted to get that one. We competed, we fought, but there were just some plays down the stretch and throughout the game that kind of, they hurt us.”

Loading...
Denial of responsibility! TechiLive.in is an automatic aggregator around the global media. All the content are available free on Internet. We have just arranged it in one platform for educational purpose only. In each content, the hyperlink to the primary source is specified. All trademarks belong to their rightful owners, all materials to their authors. If you are the owner of the content and do not want us to publish your materials on our website, please contact us by email – admin@techilive.in. The content will be deleted within 24 hours.
AnthonybigBlazersDavisLakersnews updateshortsports news
0
Share