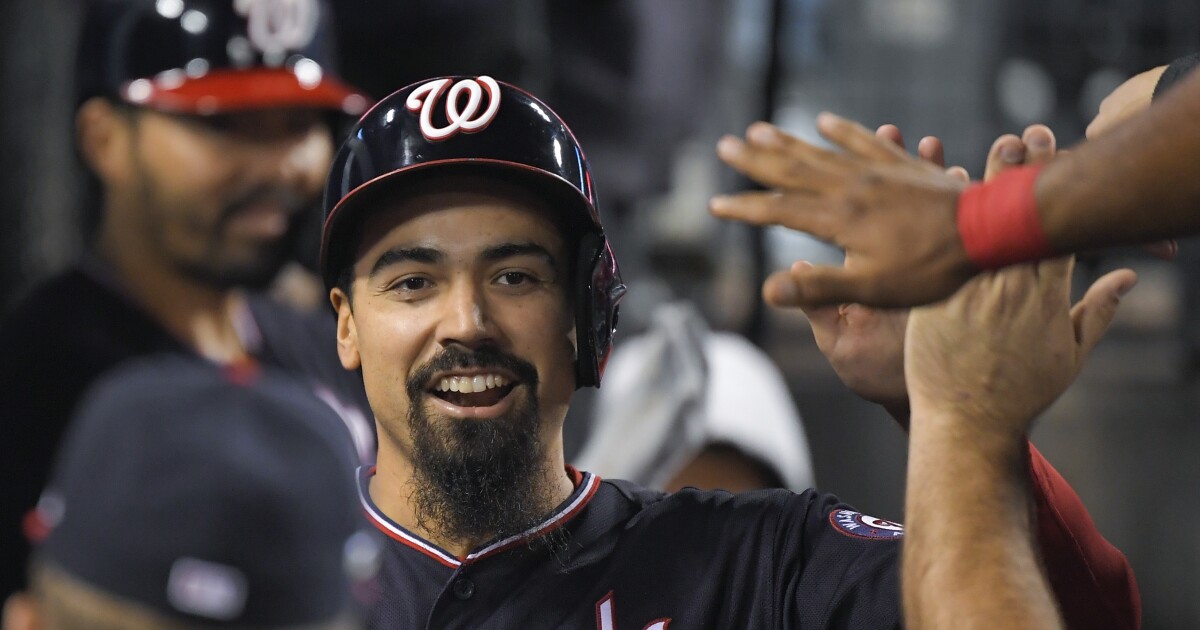 Old acquaintances were not forgot by Angels third baseman Anthony Rendon, who spent a good chunk of batting practice on Friday in front of the visiting dugout, chatting with the Washington Nationals players and team executives he won a World Series with in 2019.

Or, rather, what was left of them.

Only four players from that club — outfielders Juan Soto and Victor Robles and pitchers Patrick Corbin and Tanner Rainey — were active for Friday night’s interleague game in Angel Stadium. The other three remaining players — pitchers Stephen Strasburg, Sean Doolittle and Joe Ross — are on the injured list.

In fact, the Angels had as many players from Washington’s 2019 team in their lineup Friday night — Rendon and catcher Kurt Suzuki — as the Nationals, who had Soto and Robles.

The Nationals, who reached the playoffs five times from 2012-2019, went into rebuilding mode during a 97-loss 2021 season, trading ace Max Scherzer and infielder Trea Turner to the Dodgers, closer Daniel Hudson to the Padres and catcher Yan Gomes to the Athletics.

Two other starters from 2019, infielder Howie Kendrick and outfielder Adam Eaton, retired. Rendon, of course, signed a seven-year, $245-million deal with the Angels after hitting .319 with a 1.010 on-base-plus-slugging percentage, 34 homers, 44 doubles and a major league-leading 126 RBIs in 2019.

“It’s the business, you know?” Rendon said before the game. “They just had a couple of bad-luck incidents [with injuries] the last couple years, and they ended up kind of dispersing everybody. It is what it is.”

The lack of familiar faces did not diminish the nostalgia Rendon felt facing his former team — and the only organization he knew for his first nine years of professional baseball — for the first time.

“Yeah, without a doubt,” Rendon said, when asked if playing the Nats would stir memories of that magical 2019 season. “I actually have [a replica of] the World Series trophy here in my house, so I see it every day. It’s a constant reminder. It’s something spectacular, and now I want to bring that here.”

To do that, Rendon must continue to rebound from a brutal 2021 season in which he hit .240 with a .712 OPS, six homers and 34 RBIs 58 RBIs and had season-ending right-hip surgery in July.

“I feel like I’m getting there,” Rendon said of his offense. “I’m getting more at-bats, more swings, getting the timing down, getting used to the new body, the new hip and the new leg. So I think we’re getting better. And we’re winning. I mean, I’ll keep hitting .200 if we keep winning.”

Defensively, Rendon has made several spectacular diving stops to his left and right and reached far over the third-base dugout rail to catch a popup in Fenway Park on Thursday. But he committed four errors in his first 12 games, three of them errant throws that he attributed to lower-body fatigue.

“I felt great all spring, and once the season hit, I don’t know if it was playing every day and a full nine innings or what, but I wasn’t able to completely build up from spring training to that length,” Rendon said “But I think we got on top of it. I feel good. So hopefully that rough patch is in the past.”

Left-hander Jhonathan Diaz, who went 2-0 with a 1.96 ERA in four starts for triple-A Salt Lake, was called up to start Friday night’s game against the Nationals, taking the rotation spot of demoted left-hander Jose Suarez. The duration of Diaz’s big-league stay will hinge on performance. “When a kid comes up like that, and there’s a crack in the door, go ahead and put your best foot forward and force us to do something,” manager Joe Maddon said. “I always want players to do that.” … Utility man Jose Rojas was sent to triple-A to clear a roster spot for Diaz. … Third-base coach Phil Nevin returned after missing the road trip because of an illness. … Right-hander Sam Bachman, the ninth overall pick in last June’s draft who was sidelined for more than a month because of back spasms, made his 2022 debut for double-A Rocket City Friday night, giving up one hit, striking out one and walking one in three scoreless innings against Chattanooga.

Denial of responsibility! TechiLive.in is an automatic aggregator around the global media. All the content are available free on Internet. We have just arranged it in one platform for educational purpose only. In each content, the hyperlink to the primary source is specified. All trademarks belong to their rightful owners, all materials to their authors. If you are the owner of the content and do not want us to publish your materials on our website, please contact us by email – [email protected]. The content will be deleted within 24 hours.
AnthonyClubMeetingNationalsnews updateNostalgicRendonsports news
Share

As we gear up to celebrate Mother’s Day on May 8, celebrities talk about their moms and the one thing that they would like to gift her