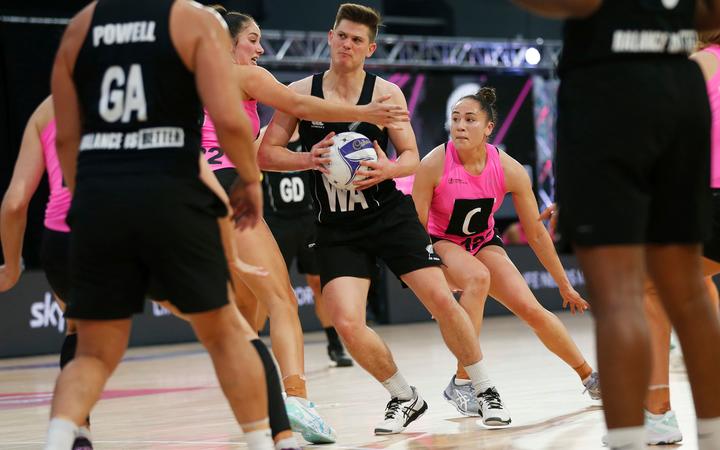 The Aotearoa Men have faced roadblocks and detours ahead of their netball series against the Silver Ferns starting on Sunday in Wellington but still believe they are showing the rest of the world the way forward.

Christchurch’s Nick Grimmer will turn out for Aotearoa Men while some of his teammates could be stuck in Auckland.
Photo: PHOTOSPORT

The team could be missing several first-string players, including captain Kruze Tangira and seven-foot shooter Quintin Gerber, caught out by Covid-19 alert level restrictions in Auckland and Waikato which prevented travel to the capital.

Netball New Zealand made applications for travel exemptions for six players and an Aotearoa Men’s team spokesperson said on Friday they were still awaiting the outcome.

With three games in three days, the depth of the men’s new-look squad will be tested.

The Silver Ferns prepared for this series with three Tests against the England Roses, whereas the men have had limited local leagues and regional tournaments.

Aotearoa Men midcourter Nick Grimmer said while there was plenty of tape on their opposition, his side could be a bit of mystery to the Silver Ferns.

“We know what they’re going to do and what they’re not going to do and strengths and weaknesses. We’re pretty lucky that they can’t see us and all they have is literally the three games from last year and it’s quite a different team with the new people that have come in.”

Grimmer knows his side can’t make excuses or dwell on the curve balls that have been thrown their way if they want their sport to be high performance in the future.

He played down the impact an ever changing squad of 14 has had in the lead up to the games and saw it as an opportunity for more players to experience game time against international players.

“We’re at a high performance level and the people that were picked know how to play the game of netball so what we’re just trying to do is get connections.

“So no matter who you are playing with it doesn’t actually matter it’s all about building your relationship with each other and the chemistry in a team to be able to perform.”

Grimmer did not expect a clean sweep for either side in the series.

“I don’t believe it will be a blow out, I think it’s going to be really tight games that’s for sure.

Covid-19 has caused havoc for sports teams and competitions around the world but the Aotearoa Men have benefitted from the Silver Ferns’ inability to cross the Tasman for games against the Australian Diamonds over the last two years.

The cancellation of the Constellation Cup games in New Zealand and Australia this month opened the door for the men’s team to take on the Silver Ferns in a broadcast series for a third consecutive year.

The hastily arranged series has had roadblocks and detours but Grimmer said they could not turn down the opportunity to go up against the world champions.

“There’d be a lot of countries that are quite jealous of what we actually have and we’re very honoured for the Silver Ferns to actually allow us to do so.

“I think I saw Jamaica potentially getting their men’s team to go against their women’s team which is huge. We’re leading the path for what men’s netball can be and hopefully the other big countries jump on board like Australia and England.”

This is the second series against the Silver Ferns that Grimmer has played in and as thankful as he is for the opportunity he said the goal was to be playing against international men’s teams.

“I can’t wait to look back and [say] there was a men’s team at the Olympics or the Commonwealth [Games], that would be the ultimate goal.”

Denial of responsibility! TechiLive.in is an automatic aggregator around the global media. All the content are available free on Internet. We have just arranged it in one platform for educational purpose only. In each content, the hyperlink to the primary source is specified. All trademarks belong to their rightful owners, all materials to their authors. If you are the owner of the content and do not want us to publish your materials on our website, please contact us by email – [email protected]. The content will be deleted within 24 hours.
AotearoaAudioCourtCurrent AffairsmenNewsnews updatePodcasts
Share