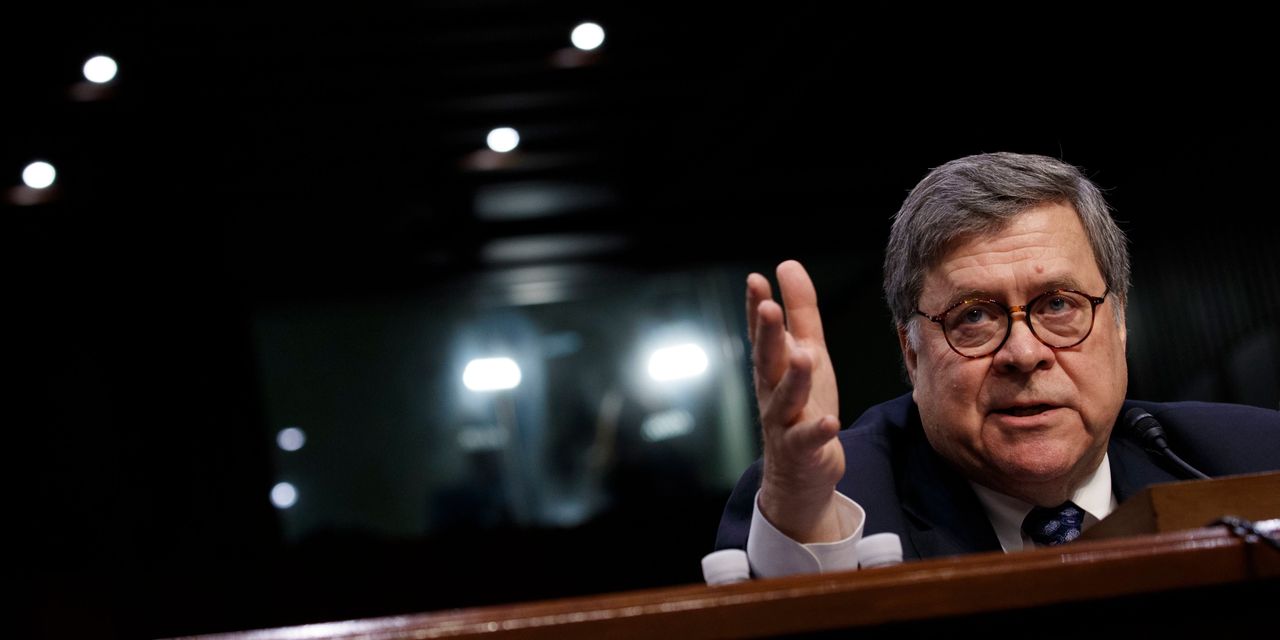 to testify before Congress about the revelations.

At the time of the subpoenas, then-President

and officials in his administration, including Mr. Sessions, were trying to locate the source of leaks about contacts between Russia and figures in Mr. Trump’s 2016 election campaign.

Mr. Barr, Mr. Trump’s second attorney general, inherited about a half-dozen leak investigations when he took office in 2019. He directed a federal prosecutor from New Jersey to work on the cases, which had languished under his predecessor, and then brief top officials, a person familiar with the matter said.

On Friday, Mr. Barr sought to distance himself from the developments, saying he had not been aware of leak cases in which there were subpoenas related to lawmakers’ communications.

“I didn’t recall that case,” Mr. Barr told The Wall Street Journal. “Whatever steps were taken, were taken before I arrived.”

The Justice Department occasionally investigates and charges members of Congress in corruption investigations, but legal experts on national security issues said there is no precedent for investigating members for leaking national security information. Most rules governing the handling of classified information are established under a president’s executive authority, and aren’t laws. Little precedent exists for whether members of Congress—as officers of a coequal branch of government—must comply.

“To my knowledge, no member of Congress has ever been prosecuted for unauthorized disclosures of classified information,” said Bradley Moss, a national security attorney in Washington.

Members of Congress also have immunity from prosecution based on actions taken in their official capacity in Congress, under the U.S. Constitution. In 1971, then-Sen. Mike Gravel entered the highly-classified Pentagon Papers into the congressional record—an action that sparked a federal grand jury investigation, but no charges were brought against the senator.

Reports of the subpoenas follow earlier revelations that the Justice Department under Mr. Barr subpoenaed the records of reporters at several news organizations including the Washington Post, the New York Times and CNN.

The Justice Department said it would no longer seek records of reporters’ contacts when investigating government leaks of sensitive information.

Mr. Horowitz, the department’s inspector general, said his office would also examine those cases. His announcement came after Attorney General

and his deputy Lisa Monaco requested the watchdog examine the department’s handling of leak cases.

Mr. Horowitz said he would examine whether the subpoenas or investigations were “based on improper considerations.”

“The reported conduct of the Department under Attorney General Barr is shocking, and clearly fits within an appalling trend that represents the opposite of how authority should be used,” said White House spokesman Andrew Bates.

Senators Schumer and Durbin said in a statement that other officials who were involved must also testify before the Senate Judiciary Committee under oath. “We expect that our Republican colleagues will join us in getting to the bottom of this serious matter,” they said.

At least one Senate Republican would need to join Democrats in voting to issue a subpoena because Democrats don’t have the power to unilaterally issue subpoenas. The chamber is evenly divided at 50-50. “I am somewhat doubtful that we would get a Republican, but it’s a possibility—I wouldn’t rule it out,” said Sen. Richard Blumenthal (D., Conn.), a member of the Senate Judiciary Committee.

“The Justice Department must provide information and answers to the Judiciary Committee, which will vigorously investigate this abuse of power,” the statement said.

(R., Neb.), who earlier this year voted to convict Mr. Trump of inciting an insurrection on Jan. 6 and voted to create a commission to investigate that day’s attack on the Capitol, which blocked due to opposition by other Senate Republicans.

The subpoenas applied only to metadata, which includes records of phone calls but not their content, a person familiar with the matter said. Obtaining the contents of communications generally requires a search warrant.

Apple has made privacy protections for users a cornerstone of its business. The Justice Department sought to force Apple to create software that would allow investigators to unlock the iPhone of the perpetrator in a 2015 San Bernardino, Calif., terrorist attack. The company refused, and ultimately the two sides avoided a courtroom showdown when the Federal Bureau of Investigation used an outside party to gain access to the device.

Even as it refused to unlock phones, Apple regularly complies with court orders for information in the U.S. and abroad. In the first six months of 2020, the latest year in which data was available, Apple complied with thousands of requests for account and device access, according to figures the company discloses on its website. Apple didn’t respond to a request for comment.

and House Intelligence Committee Chairman Adam Schiff have called for an investigation into the Justice Department’s pursuit of the communications data, first reported by the New York Times. It reported that the records of at least a dozen people connected to the panel in 2017 and early 2018, including those of Mr. Schiff, were seized in the probe.

The House Intelligence Committee has continued to seek additional information from the Justice Department, the official said, adding that “DOJ has not been forthcoming in a timely manner, including on questions such as whether the investigation was properly predicated and whether it only targeted Democrats.”

Denial of responsibility! TechiLive.in is an automatic aggregator around the global media. All the content are available free on Internet. We have just arranged it in one platform for educational purpose only. In each content, the hyperlink to the primary source is specified. All trademarks belong to their rightful owners, all materials to their authors. If you are the owner of the content and do not want us to publish your materials on our website, please contact us by email – [email protected]. The content will be deleted within 24 hours.
AAPLAppleBarrcallscomputersComputers/Consumer ElectronicsConsumer ElectronicsCrime
0
Share

Would you like a fertility consult with your lipstick?