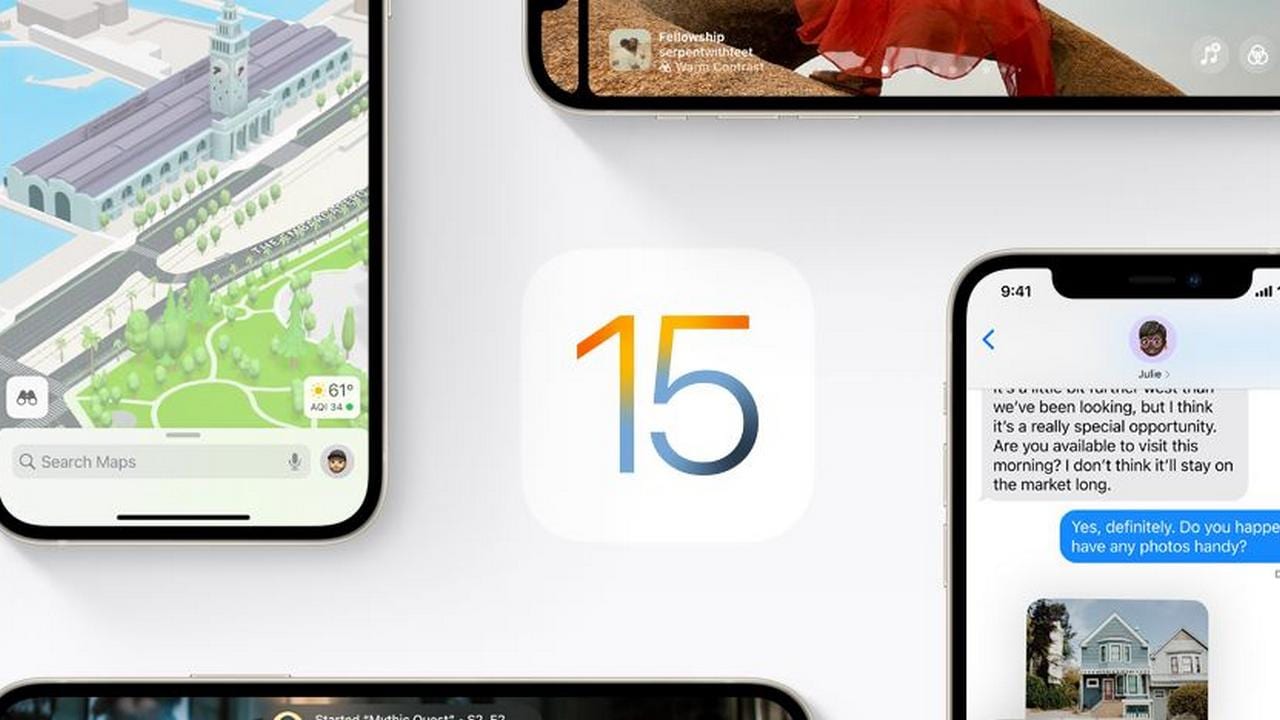 Apple launched a few new devices at its California Streaming event on 14 September. These products include iPad, iPad Mini, Apple Watch Series 7, iPhone 13, iPhone 13 Mini, iPhone 13 Pro and iPhone 13 Pro Max. The tech giant has announced that the new iPad and iPad mini will run on iPadOS 15 which was announced at WWDC 2021. Similarly, the iPhone 13 series models will also run on the upcoming iOS 15. Apple says that it will release both iPadOS 15 and iOS 15 for its users on 20 September.

Compatible for iPhone 6s and later, the new iOS 15 introduces Spatial Audio for FaceTime to make it sound more “natural and comfortable”. It also adds new microphone modes that can separate the user’s voice from background noise. With a new grid view, users will also be able to see more faces simultaneously during Group FaceTime.

Apple has also introduced ‘SharePlay’ for FaceTime that will allow users to listen to songs on Apple Music, watch movies and shows together. The feature will also allow screen sharing. SharePlay will be available on iPhone, iPad, and Mac. In addition to this, FaceTime also gets an option to create links so that you can use it cross-platform across the web and non-iOS devices.

iOS 15 also comes with a new ‘Focus’ feature to tweak what you want to pay attention to. The new iOS 15 gives a new look to notifications. Profile icons on notifications are now bigger. A new ‘Notification Summary’ will give a summary of all “non-time-critical” notifications at the chosen time of the day.

The new software update also gets a new Live Text feature which automatically recognises text in images, including handwritten, and makes it selectable, and you can even copy and paste it. With the new update, the Apple Maps app now has more details like crosswalks and bike lanes. A few US cities will also see a 3D city experience on the app.

The AirPods Pro get a new conversation mode, which will automatically boost conversation volume. AirPods also get ambient Find My features even when they’re in the case. The weather app has also got a design overhaul.

Apple has also announced new features for iCloud called iCloud+. This cloud storage will offer a “new internet privacy service, iCloud Private Relay, at no additional cost”. All the iCloud members will be upgraded to the iCloud+ and its plans can be shared with the Family Sharing Group. According to Apple, users will also get unlimited free iCloud+ storage for a new device temporary backup for up to three weeks even if they don’t have storage in their iCloud account.

Apple Mails get mail privacy protection that hides your IP address, location and disables trackers. iOS 15 introduces three new features to the Health app. Users will now be able to share their health data with family, caregivers, or a care team. The new ‘Trends’ feature will show the health metric of the users and the ‘Walking Steadiness’ feature will show a new metric to manage fall risk more efficiently.

The Apple TV app will now show “For All of You” row that will include “a collection of shows and movies based on the interests of selected people or an entire household”.

With iPadOS 15, iPad finally gets home screen widgets and an ‘App Library’ that can hide pages and rearrange them. The new software update also brings a multitasking shortcut that will easily let you switch between apps in split view. There will also be a ‘Shelf’ at the bottom that will show you all the opened apps. iPadOS 15 also adds quick notes that you can use parallelly with third-party apps and sites, and easily drag and note links and text. Users will also get ‘Tags’ that will help users categorise notes as per their choice.

Apple also announces a new ‘Universal Control’ feature that will allow users to use a single mouse and keyboard between iPad and Mac. According to Apple, “Users can even drag and drop content back and forth between devices — great for sketching a drawing with Apple Pencil on iPad and placing it into a Keynote slide on Mac.”

Denial of responsibility! TechiLive.in is an automatic aggregator around the global media. All the content are available free on Internet. We have just arranged it in one platform for educational purpose only. In each content, the hyperlink to the primary source is specified. All trademarks belong to their rightful owners, all materials to their authors. If you are the owner of the content and do not want us to publish your materials on our website, please contact us by email – [email protected]. The content will be deleted within 24 hours.
AppleCompatibledevicesFeaturesFirstpostgadget updateiOSios 15
Share

Plenty to ponder for Solskjaer as 10-man United lose