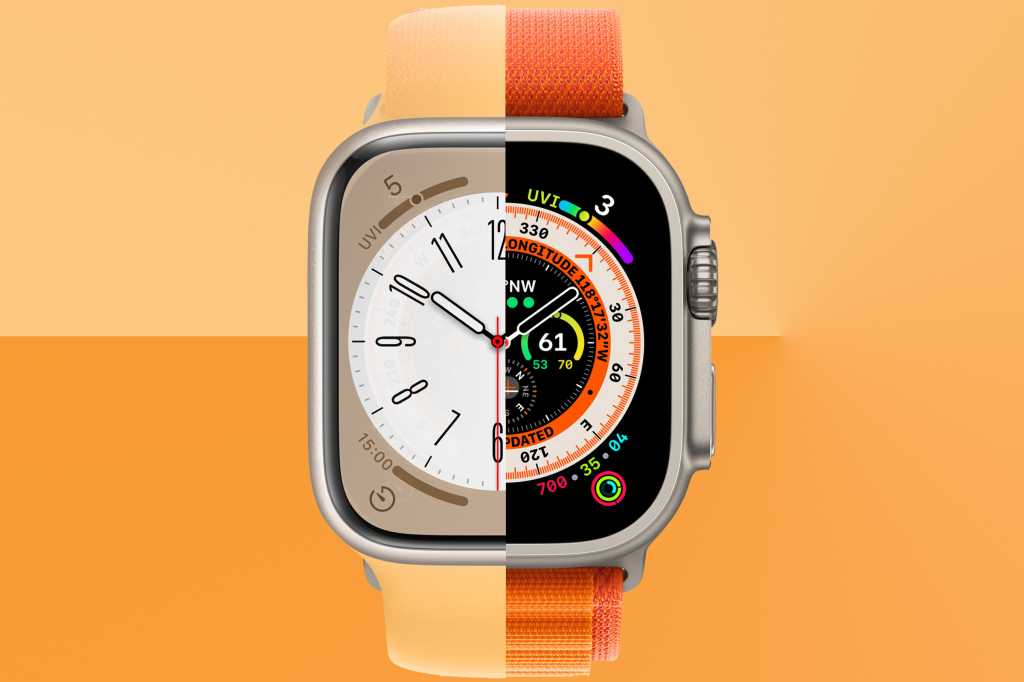 The Apple Watch Ultra follows the same design principles that Apple has always had for the watch, with a rectangular shape and rounded edges and corners. But It’s on a bigger scale, and Apple also made changes to increase the durability of the Ultra, such as a raised rim around the watch face, and the bar to protect the Digital Crown and Side button.

The Ultra is available only in a 49mm size. The Ultra is thicker (14.4mm) than the Series 8 (10.7mm) in order to carry a bigger battery. At 61.3 grams, the Ultra is more than 10 grams heavier than the heaviest Series 8 with a 45mm stainless steel case.

The Series 8 has the same design as the Series 7, which had slight changes from the Series 6: smaller bezels to accommodate a larger display and case corners that are rounder. The Series 8 is available in 45mm and 41mm sizes.

Both the Ultra and Series 8 have always-on displays, but the Ultra’s brightness has a maximum of 2,000 nits, which is twice the specification of the Series 8 and the brightest of all the Apple Watches.

The Apple Watch has always been very durable. Since the Series 8 has the same construction as the Series 7, its durability has not changed–both of those watches have a thicker front crystal display than the Series 6, so it’s stronger and more scratch-resistant. The Series 8 is certified at IP6X dust-tight resistance and has a water-resistance rating of 50 meters.

The Apple Watch Ultra, however, is a completely different beast. It’s built to withstand the harshest conditions and treatment. That starts with the use of titanium for the case, which is more durable than the aluminum or stainless steel in the Series 8. The case is slightly raised around the display (which has sapphire front crystals) to help protect it, and there’s also a bar to protect the Digital Crown.

Like the Series 8, the Ultra is IP6X dust resistant, but then Apple goes several steps further. The Ultra has been tested to the MIL-STD 810H military standard, which means it can handle extreme conditions of altitude, temperature, rain, physical shock, vibration, and more. It is water resistant to 100 meters, with a recreational dive limit of 40 meters.

Both watches run watchOS 9, and all new Apple Watch models have the new Crash Detection feature, which can sense if you’ve been in a car crash and can contact emergency services for you. The Apple Watch Ultra and Series 8 also have the same health features, including the new temperature sensor that tracks temperature trends overnight and can be used for ovulation cycle tracking.

The Apple Watch Ultra has features for athletes that aren’t on the other Apple Watch models. These include:

The Ultra has a new button on its left side called the Action button. This button is programmable and works with apps to give the user a quick way to activate a specific function. For example, it can be used to drop a waypoint while hiking, or you can press it when you start a dive. It also can be used to activate an 89-decibel alarm in case you want to alert anyone around you.

These are the sensors on both the Apple Watch Series 8 and the Ultra.

The following are on the Apple Watch Series 8 only:

The following are on the Apple Watch Ultra only:

As for bands, the Series 8 has a large selection of bands to choose from, made from nylon, leather, or stainless steel. And Apple continues to offer Nike and Hermès versions that not only have special bands but also watch faces.

Both of these watches use an S8 processor, and while we haven’t seen benchmarks or tests yet, there’s no reason to believe that they perform differently.

The Apple Watch Ultra does have a couple of key upgrades that will make it feel like a better performer. The first is its dual-frequency GPS, where it uses the L1 and L5 frequencies to provide more accurate location metrics than on other Apple Watches. The other is Bluetooth 5.3 support, which offers better energy consumption and connectivity than Bluetooth 5.0 in the other watches.

The Apple Watch Ultra comes with cellular LTE connectivity and there’s no option to get one without it. The Apple Watch Series 8 can be bought with or without LTE.

The Apple Watch Series 8 offers the same 18 hours of battery life as its predecessor and every other Apple Watch model. A new Low-Power Mode in watchOS 9 can extend battery life to 36 hours, but this mode disables some features, such as the always-on display, heart health monitoring, and workout autostart. If you want to do sleep tracking and you haven’t been using Low Power Mode, you’ll need to charge the watch sometime before you go to sleep.

At 36 hours, Apple Watch Ultra has twice the battery life as the Series 8–but keep in mind that the Ultra is a bigger watch with a bigger battery. Some might find it to be too big to wear for sleep tracking.

Fast charging is available for both the Series 8 and Ultra if you use the Apple Watch Magnetic Fast Charging USB-C Cable (Model A2515) and a 20W power adapter. Apple says that eight minutes of fast charging will cover eight hours of sleep tracking.

However, Apple only includes the cable with the Apple Watch is you’ll need a 20W adapter or greater with a USB-C port. Apple sells a 20W USB-C Power Adapter (Model A2305) for $19, but you might be able to find a third-party offering that’s cheaper and has additional features, such as the Anker 20W Fast Charger with Foldable Plug that’s $15 on Amazon. Or you can pay a little more and find an adapter with additional ports so you can charge multiple devices.

The Apple Watch Series 8 starts at $399 with GPS only, and the price goes up if you want to add cellular connectivity and/or change the case material and the band. Here are the starting prices for the various options.

The Apple Watch Ultra starts at $799, and it comes in only a 49mm size with a titanium case, GPS+ cellular connectivity, and either a Trail Loop, Alpine Loop, or Ocean Band watch band. That’s not cheap, of course, but it’s less expensive than the titanium 45mm Apple Watch Edition that Apple recently sold.

The Apple Watch Series 8 is a fine smartwatch, but it doesn’t bring much that the Series 7 doesn’t. We wouldn’t recommend updating from a Series 7 or Series 6 unless you really need to have the latest and greatest watch every year.

The Ultra, however, is a different story. While its 49mm display will be too big for many users, its tremendous feature set, excellent battery life, and titanium finish make it very compelling, especially at a $799 price tag. Even if you won’t use many of the features, the 36-hour battery life and rugged case make it a great purchase for anyone who loves large watches—and maybe even a few people who don’t.

Denial of responsibility! TechiLive.in is an automatic aggregator around the global media. All the content are available free on Internet. We have just arranged it in one platform for educational purpose only. In each content, the hyperlink to the primary source is specified. All trademarks belong to their rightful owners, all materials to their authors. If you are the owner of the content and do not want us to publish your materials on our website, please contact us by email – [email protected]. The content will be deleted within 24 hours.
AppleBiggergadget updateseriestech newstech updatetechi liveUltra
Share

India to be world’s second largest economy by 2050, to add a trillion dollar to GDP every 12-18 months: Gautam Adani