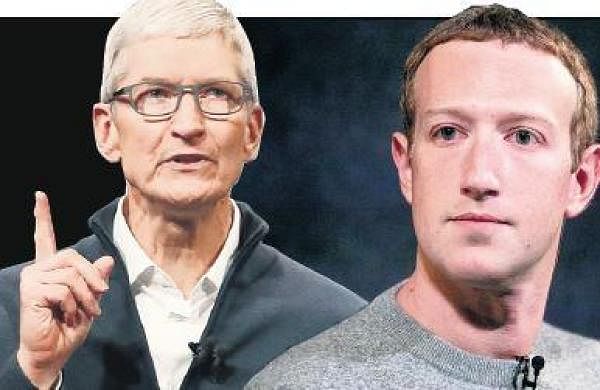 NEW DELHI: For more than two years now, Apple and Facebook have been at loggerheads over user privacy, with latter growing increasingly infamous over its lax data security. Now, Apple is releasing a privacy feature that will require apps to get permission from users before tracking their behaviour across other apps.

Most smartphone users are not aware that companies such as Facebook track their activity on other apps such as Spotify and Amazon. This data is used by advertisers to target users with more specific ads. With Apple’s new software, iPhone users will see pop-up windows that ask their permission to allow this tracking.

Apple will begin requiring app makers to tell users what tracking information they want to gather and get permission to do so, displaying what have been referred to as “privacy nutrition labels.”The move by Apple, which has been in the works for months, has sparked a major rift with Facebook and other tech rivals and could have major implications for data privacy and the mobile ecosystem.Digital ads are the lifeblood of internet giants such as Google and Facebook, and are credited with paying for the cornucopia of free online content and services.

Mobile Dev Memo analyst and strategist Eric Seufert said Apple’s new framework could “upend” the app economy along with digital advertising more broadly, calling the new policy “a change agent.”Seufert said in a blog post, “It’s impossible to dismiss the fact that digital advertising on mobile is conducted through what Apple defines as ‘tracking’: explicitly purging this activity from the ecosystem will require the mobile operating model to change.”

The New York Times reported on Monday on Apple’s privacy feature could escalate the differences between Apple CEO Time Cook and Facebook chief Mark Zuckerberg.The problem lies in the fundamental difference between the two tech industry leaders’ visions for the future. “Mr. Cook wants people to pay a premium — often to Apple — for a safer, more private version of the internet. It is a strategy that keeps Apple firmly in control. But Mr. Zuckerberg champions an “open” internet where services like Facebook are effectively free. In that scenario, advertisers foot the bill,” The Times wrote, also citing two unnamed people familiar with the matter that the relationship between the two executives has become more chilly.

After the Cambridge Analytica scandal of 2018, which highlighted Facebook’s mass collection of user data, Cook began to distance Apple from Facebook and said that “some well-crafted regulation is necessary” for the social network. Apple then introduced new technological changes such as screen-time trackers and browser tracking protections, which can affect Facebook’s digital business model of collecting user data.

When Apple’s latest privacy feature of app-tracking permissions was said to be in the works in 2019, Facebook took it as a declaration of war, the newspaper reported, citing three unnamed current and former employees. Facebook took out full-page ads in newspapers attacking the feature.Zuckerberg said in an earnings call this year that Apple was becoming one of his company’s biggest competitors, with its rival smartphone messaging service and tight grip on the App Store, the sole gateway onto iPhones.

Denial of responsibility! TechiLive.in is an automatic aggregator around the global media. All the content are available free on Internet. We have just arranged it in one platform for educational purpose only. In each content, the hyperlink to the primary source is specified. All trademarks belong to their rightful owners, all materials to their authors. If you are the owner of the content and do not want us to publish your materials on our website, please contact us by email – [email protected]. The content will be deleted within 24 hours.
Loading...
AppleApplesescalatefacebookFacebook privacyfeudiPhonelifestyle news
0
Share

‘A fighter all through his life’