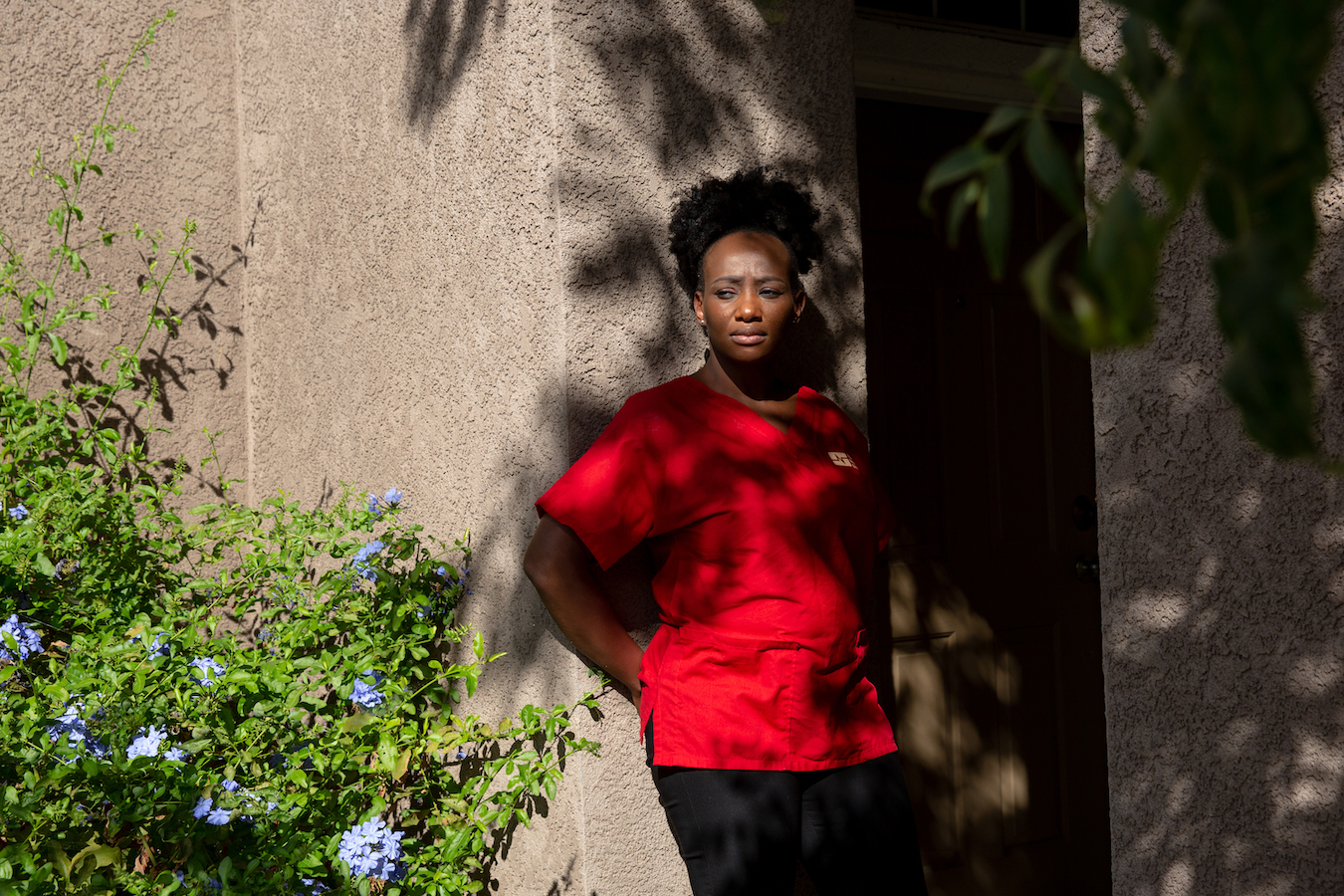 ‘Are You Going to Keep Me Safe?’ Hospital Workers Sound Alarm on Rising Violence

By Bram Sable-Smith and Andy Miller

The San Leandro Hospital emergency department, where nurse Mawata Kamara works, went into lockdown recently when a visitor, agitated about being barred from seeing a patient due to covid-19 restrictions, threatened to bring a gun to the California facility.

It wasn’t the first time the department faced a gun threat during the pandemic. Earlier in the year, a psychiatric patient well known at the department became increasingly violent, spewing racial slurs, spitting toward staffers and lobbing punches before eventually threatening to shoot Kamara in the face.

“Violence has always been a problem,” Kamara said. “This pandemic really just added a magnifying glass.”

In the earliest days of the pandemic, nightly celebrations lauded the bravery of front-line health care workers. Eighteen months later, those same workers say they are experiencing an alarming rise in violence in their workplaces.

A nurse testified before a Georgia Senate study committee in September that she was attacked by a patient so severely last spring she landed in the ER of her own hospital.

At Research Medical Center in Kansas City, Missouri, security was called to the covid unit, said nurse Jenn Caldwell, when a visitor aggressively yelled at the nursing staff about the condition of his wife, who was a patient.

In Missouri, a tripling of physical assaults against nurses prompted Cox Medical Center Branson to issue panic buttons that can be worn on employees’ identification badges.

Hospital executives were already attuned to workplace violence before the pandemic struck. But stresses from covid have exacerbated the problem, they say, prompting increased security, de-escalation training and pleas for civility. And while many hospitals work to address the issue on their own, nurses and other workers are pushing federal legislation to create enforceable standards nationwide.

Paul Sarnese, an executive at Virtua Health in New Jersey and president of the International Association for Healthcare Security and Safety, said many studies show health care workers are much more likely to be victims of aggravated assault than workers in any other industry.

Federal data shows health care workers faced 73% of all nonfatal injuries from workplace violence in the U.S. in 2018. It’s too early to have comprehensive stats from the pandemic.

Even so, Michelle Wallace, chief nursing officer at Grady Health System in Georgia, said the violence is likely even higher because many victims of patient assaults don’t report them.

“We say, ‘This is part of our job,’” said Wallace, who advocates for more reporting.

Caldwell said she had been a nurse for less than three months the first time she was assaulted at work — a patient spit at her. In the four years since, she estimated, she hasn’t gone more than three months without being verbally or physically assaulted.

“I wouldn’t say that it’s expected, but it is accepted,” Caldwell said. “We have a lot of people with mental health issues that come through our doors.”

Jackie Gatz, vice president of safety and preparedness for the Missouri Hospital Association, said a lack of behavioral health resources can spur violence as patients seek treatment for mental health issues and substance use disorders in ERs. Life can also spill inside to the hospital, with violent episodes that began outside continuing inside or the presence of law enforcement officers escalating tensions.

A February 2021 report from National Nurses United — a union in which both Kamara and Caldwell are representatives — offers another possible factor: staffing levels that don’t allow workers sufficient time to recognize and de-escalate possibly volatile situations.

Covid unit nurses also have shouldered extra responsibilities during the pandemic. Duties such as feeding patients, drawing blood and cleaning rooms would typically be conducted by other hospital staffers, but nurses have pitched in on those jobs to minimize the number of workers visiting the negative-pressure rooms where covid patients are treated. While the workload has increased, the number of patients each nurse oversees is unchanged, leaving little time to hear the concerns of visitors scared for the well-being of their loved ones — like the man who aggressively yelled at the nurses in Caldwell’s unit.

In September, 31% of hospital nurses surveyed by that union said they had faced workplace violence, up from 22% in March.

Dr. Bryce Gartland, hospital group president of Atlanta-based Emory Healthcare, said violence has escalated as the pandemic has worn on, particularly during the latest wave of infections, hospitalization and deaths.

“Front-line health care workers and first responders have been on the battlefield for 18 months,” Garland said. “They’re exhausted.”

Like the increase in violence on airplanes, at sports arenas and school board meetings, the rising tensions inside hospitals could be a reflection of the mounting tensions outside them.

William Mahoney, president of Cox Medical Center Branson, said national political anger is acted out locally, especially when staffers ask people who come into the hospital to put on a mask.

Caldwell, the nurse in Kansas City, said the physical nature of covid infections can contribute to an increase in violence. Patients in the covid unit often have dangerously low oxygen levels.

“People have different political views — they’re either CNN or Fox News — and they start yelling at you, screaming at you,” Mahoney said.

“When that happens, they become confused and also extremely combative,” Caldwell said.

Sarnese said the pandemic has given hospitals an opportunity to revisit their safety protocols. Limiting entry points to enable covid screening, for example, allows hospitals to funnel visitors past security cameras.

In Branson, Mahoney’s hospital has bolstered its security staff, mounted cameras around the facility, brought in dogs (“people don’t really want to swing at you when there’s a German shepherd sitting there”) and conducted de-escalation training — in addition to the panic buttons.

Some of those efforts pre-date the pandemic but the covid crisis has added urgency in an industry already struggling to recruit employees and maintain adequate staffing levels. “The No. 1 question we started getting asked is, ‘Are you going to keep me safe?’” Mahoney said.

While several states, including California, have rules to address violence in hospitals, National Nurses United is calling for the U.S. Senate to pass the Workplace Violence Prevention for Health Care and Social Service Workers Act that would require hospitals to adopt plans to prevent violence.

“With any standard, at the end of the day you need that to be enforced,” said the union’s industrial hygienist, Rocelyn de Leon-Minch.

Nurses in states with laws on the books still face violence, but they have an enforceable standard they can point to when asking for that violence to be addressed. De Leon-Minch said the federal bill, which passed the House in April, aims to extend that protection to health care workers nationwide.

Destiny, the nurse who testified in Georgia using only her first name, is pressing charges against the patient who attacked her. The state Senate committee is now eyeing legislation for next year.

Kamara said the recent violence helped lead her hospital to provide de-escalation training, although she was dissatisfied with it. San Leandro Hospital spokesperson Victoria Balladares said the hospital had not experienced an increase in workplace violence during the pandemic.

For health care workers such as Kamara, all this antagonism toward them is a far cry from the early days of the pandemic when hospital workers were widely hailed as heroes.

“I don’t want to be a hero,” Kamara said. “I want to be a mom and a nurse. I want to be considered a person who chose a career that they love, and they deserve to go to work and do it in peace. And not feel like they’re going to get harmed.”

Denial of responsibility! TechiLive.in is an automatic aggregator around the global media. All the content are available free on Internet. We have just arranged it in one platform for educational purpose only. In each content, the hyperlink to the primary source is specified. All trademarks belong to their rightful owners, all materials to their authors. If you are the owner of the content and do not want us to publish your materials on our website, please contact us by email – [email protected]. The content will be deleted within 24 hours.
alarmHealth newsHealth updatehospitalnews updateRisingSafeSound
Share

Manushi Chhillar urges girls to express freely, be vocal for their rights