Notice: amp_is_available was called incorrectly. `amp_is_available()` (or `amp_is_request()`, formerly `is_amp_endpoint()`) was called too early and so it will not work properly. WordPress is currently doing the `pre_get_posts` hook. Calling this function before the `wp` action means it will not have access to `WP_Query` and the queried object to determine if it is an AMP response, thus neither the `amp_skip_post()` filter nor the AMP enabled toggle will be considered. It appears the theme with slug `publisher` is responsible; please contact the author. Please see Debugging in WordPress for more information. (This message was added in version 2.0.0.) in /home/runcloud/webapps/techilive/wp-includes/functions.php on line 5313
 Arjun Gowda takes people on their last journey - TechiLive.in 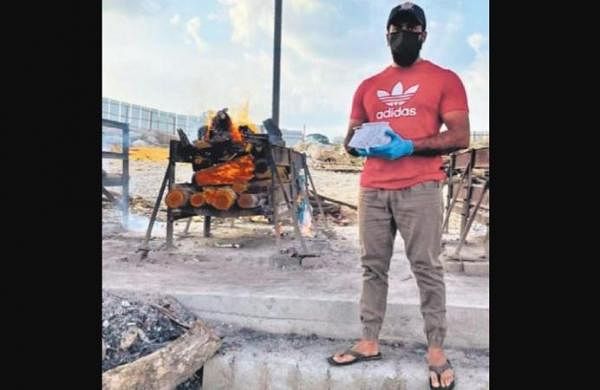 Actor Arjun Gowda, who turned ambulance driver for Covid-19 patients, has taken yet another step to help those who have lost loved ones to the disease.

The actor is leaving for Kashi on Wednesday to immerse the ashes of more than 90 people who died of Covid in Ganga.

In a recent interview with CE, Gowda had said that he was a staunch believer of Lord Shiva had visited Kashi several times and was familiar with the place and people there. Ask him about this decision, and he says this is another opportunity to serve mankind.

“Over the last one-and-a-half months, I cremated over 100 bodies as an ambulance driver. Some of them were not willing to keep the ashes at home, and we also had the ashes of unclaimed bodies. After much thought, I decided to immerse the ashes in the Ganga,” says Arjun Gowda.

“I am taking a small quantity of the ashes of different people and putting them in one pot, which will be put in a box and carried as luggage. Later, I will immerse it,” says Gowda.

He says that a lot of people from Bengaluru take ashes to Varanasi, and that he would follow the rules.

“Immersing the ashes makes it (life) a complete circle, and I will be giving that last respect to all those human souls. This is another opportunity to serve mankind, and Lord Shiva whom I believe in,” says the actor.

He knows he could have immersed the ashes elsewhere.

“The ashes could have been immersed in Srirangapatna or other places nearby. But my emotions lie with the Ganga.”

The Mandya-born actor began to work as an ambulance drive in mid-April with Project Smile Trust. The release of his latest film WoW, has been delayed because of the pandemic.

Denial of responsibility! TechiLive.in is an automatic aggregator around the global media. All the content are available free on Internet. We have just arranged it in one platform for educational purpose only. In each content, the hyperlink to the primary source is specified. All trademarks belong to their rightful owners, all materials to their authors. If you are the owner of the content and do not want us to publish your materials on our website, please contact us by email – admin@techilive.in. The content will be deleted within 24 hours.
Loading...
ArjunArjun Gowdaentertainment newsEntertainment updateGowdaJourneynews updatePeople
0
Share