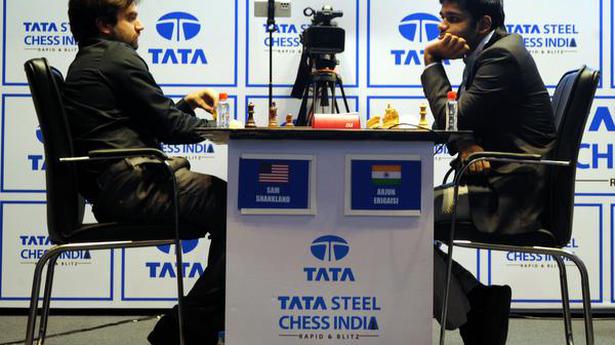 Earlier this month, Arjun Erigaisi caused a sensation in the Latvian capital of Riga. At the Lindores Abbey Blitz tournament, he won his first nine games, as he beat some of the biggest names in international chess.

It looks like he is still in that kind of form. The 18-year-old from Telangana moved to the sole lead going into the final day of the rapid section of the Tata Steel Chess.

At the end of the second day, he was on five points. He won all his three games at the National Library here on Thursday.

Following him one point behind him were R. Praggnanandhaa and top seed Levon Aronian, the Armenian who had won his three games on the opening day to take the lead. In third place, with 3.5 points, was Vidit Gujrathi.

With just three rounds remaining in the rapid event, Friday should produce some fascinating games. It would be interesting to watch how far Arjun’s form and confidence will carry him.

He will take on B. Adhiban, the man who is struggling here to live up to his nickname of The Beast, in the seventh round, Gujrathi in the eighth and Aronian in the ninth. They are all formidable rivals, but they will be aware that the momentum is with the youngster who has the second-lowest FIDE rating for rapid chess among all the 10 contestants here.

If it took Arjun 92 moves to win his first game of the day, against R. Vaishali — the Spanish Game progressed to a rook-and-pawn ending — he needed only 19 to overcome Sam Shankland, the third-seeded American, who made a couple of weak moves earlier on and had no answer to a potent king-side attack from White.

Sandwiched between those wins was the 32-move one against second seed and former World blitz champion Le Quang Liem of Vietnam. While wrapping up the day’s action, Viswanathan Anand, who is here as a mentor and brand ambassador of the tournament, called Arjun the hero of the day.

None would have disputed with the genial genius from Chennai.

The results (Indians unless specified):

Denial of responsibility! TechiLive.in is an automatic aggregator around the global media. All the content are available free on Internet. We have just arranged it in one platform for educational purpose only. In each content, the hyperlink to the primary source is specified. All trademarks belong to their rightful owners, all materials to their authors. If you are the owner of the content and do not want us to publish your materials on our website, please contact us by email – [email protected]. The content will be deleted within 24 hours.
Arjunarjun erigaisiGamesinternational chessLeadLindores Abbey Blitz tournamentmovesnews update
Share

The 2022 Alizés Awards: Even more recognition this year!